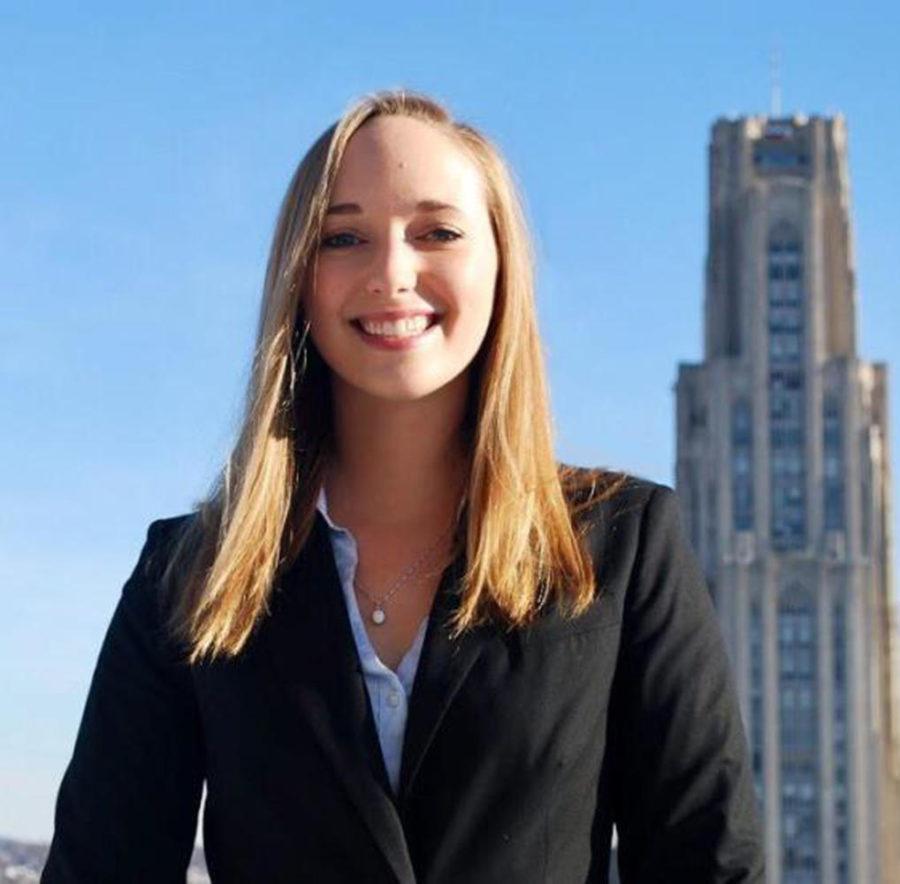 The Pitt News editorial board endorses Maggie Kennedy for SGB president. (Photo via Student Government Board)

Candidates for the position of Student Government Board president run campaigns every year, requiring them to sit down with any number of student organizations, clubs and social groups and explain their case. With election day right around the corner, this year’s two candidates met with one more group — the editors of The Pitt News.

As a group, TPN’s editorial board meets separately with the presidential candidates every year to discuss the issues facing the student body and the University, and how each contender would address them if elected. Our official endorsement reflects who we believe would best undertake the responsibilities of president.

Selecting just one individual for this distinction is a difficult process every year. After what seemed like endless deliberation, last year’s editorial board chose to endorse Justin Horowitz in a close race between three highly qualified candidates. And if anything, this year’s decision between juniors Maggie Kennedy and Saket Rajprohat was more difficult.

Both candidates for president have exciting ideas about how to change Pitt for the better, as well as distinct qualities that would help them in pursuing those ideas. But after careful deliberation, the editorial board decided that Kennedy’s concrete, specific proposals to fix problems around campus and her personal attachment to the issues deserved our endorsement.

Kennedy and Rajprohat have each taken widely different approaches to get where they are on the eve of the election. In her three years at Pitt, Kennedy has racked up extensive experience working in various parts of student government and the University community at large. The communications and political science major currently serves as chair of SGB’s Wellness Committee, as well as a peer educator for Pitt’s SHARE office and a resident assistant. She credits this experience as part of the basis for one of her initiatives — improved resources and education against sexual violence.

Rajprohat’s story impressed the editorial board for different reasons. Transferring from Robert Morris University halfway through his first year, he initially struggled to find his niche at Pitt. He credits his membership in a long list of student clubs, including refugee education organization FORGE and the Pitt Asian Students Alliance, with giving him a sense of community — and promises to rely heavily on leaders of student organizations to make informed decisions if he wins the election Tuesday.

In a number of important ways, the platforms in this year’s presidential election look remarkably like each other. Both Kennedy and Rajprohat included proposals in their pitches to boost student participation in student government — an issue with perennial relevance as the Board’s public meetings remain sparsely attended.

Kennedy suggests introducing an incentive system to ensure that, at the very least, student leaders are invested in attending weekly SGB meetings. While not superseding the allocation system already in existence, an additional “sponsorship” process would provide student groups with assistance outside of money, such as marketing or design work.

“I wouldn’t want to make anything a requirement, because I know that wouldn’t really be feasible and would cause backlash,” Kennedy said. “But if you are able to come [to weekly meetings], perhaps that would boost you up the list for the sponsorship program.”

If elected, Kennedy sees her role as president as one of providing a liaison between leaders in various student organizations and University administrators. The focus on using student groups as a medium for more effective communication between student government and individual students involved in these clubs is also one Rajprohat mentioned, and seems likely to be helpful with increasing student participation in community affairs.

Going beyond a simple focus on student organizations, however, Kennedy wants to add the “Fix-It-Pitt” feature already available on SGB’s website to Pitt students’ my.pitt.edu homepages in order to make individual interactions between student government and students who want to see change on campus easier. While both presidential slates emphasized SGB transparency and responsiveness to student concerns, Kennedy’s appeared more prepared to do so as effectively as possible.

Among the specific problems on campus Kennedy brought up was the addition of more frequent Pitt shuttle services to South Oakland, a focus on diversity among University Counseling Center staff and more proactive sexual assault education for incoming first-years. If she wins the election Tuesday, the editorial board recommends she work to include some of the specific proposals suggested by Rajprohat — including improvements to the SafeRider service and more effective communication about gender-neutral bathroom options.

While not a sufficient qualification on its own, Kennedy’s previous experience in student government gives us confidence that she will be able to effectively advocate for the student body’s concerns. Her repeated emphasis on “quantifiable data” about student attitudes showed an understanding of how to navigate the complicated world of Pitt’s administration.

“[I would] really push administration and make sure they know these are our concerns,” Kennedy said. “Quantifiable data — this is proof, this is what we care about. This is what we want our money going to, rather than, I don’t know, revamping the victory lights.”

Though the victory light addition was funded by a donation to the athletic department, the point is well taken.

While Kennedy is already familiar with the ins and outs of student government, she also seems able to push back against University administrators if need be. When Pitt junior Alina Sheykhet was killed last semester, many Pitt students were shocked by the relative silence from the University. And Kennedy agreed.

“I wouldn’t want to burn any bridges or anything, but if I were in this position, I’d make it known what myself and SGB stands for,” she said. “And if that’s different from what the administration is saying, then it’s different.”

Kennedy’s resolve, combined with her intimate knowledge of the policy process and clear attachment to the issues, make her a strong candidate for the position of SGB president. If she wins election tomorrow, we expect to see all of the positives we saw in Kennedy at work next year.

Editor’s note: Saket Rajprohat worked as a columnist for The Pitt News.