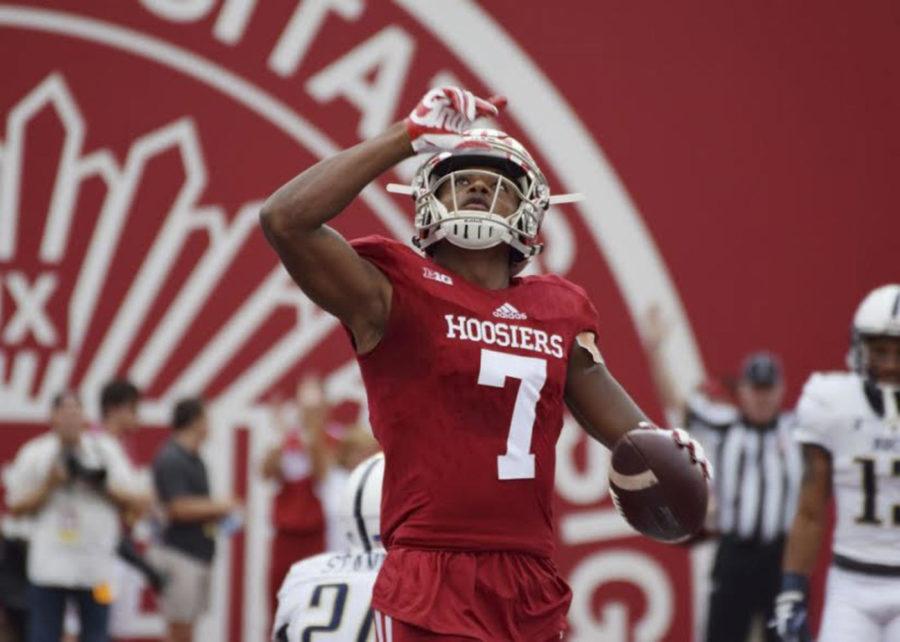 Taysir Mack is a transfer from Indiana University who recently signed on to be a wide receiver for Pitt’s football team beginning in 2019. (Photo courtesy of Ty Vinson | Indiana Daily student)

Pitt has a storied history of great college wide receivers, including Larry Fitzgerald, Antonio Bryant and Tyler Boyd. Taysir Mack, a new Pitt transfer from Indiana University, hopes to follow in their footsteps.

“Every time I walk in the door, I look at the Biletnikoff Award, and I’m just like ‘Wow, one day I want to be at that level. That’s something I want to achieve,’” Mack said. “That also keeps me humble and makes me want to work hard. [Pitt legends] motivate the whole receiver group, because everybody has something to look up to.”

Touted as a three-star recruit coming out of high school, Mack was ranked the seventh-best recruit in the state of New York on 247Sports in 2016. The Brooklyn native originally committed to Rutgers University before flipping to Indiana to play for then-Hoosiers head coach Kevin Wilson.

“Mack is a tremendous talent who gets off the line of scrimmage quickly, is fantastic getting into and out of breaks, and he is elusive after the catch with a very good change of direction,” 247Sports’ Brian Dohn wrote. “Mack has good ball skills and can get behind the defense for big plays. He has to get stronger to be able to handle physical defensive backs and also block in the running game.”
Mack has improved the size issue that Dohl mentions since he was recruited in 2016. Listed as 177 pounds by rivals.com in his senior year of high school, Mack is now 200 pounds coming into Pitt.

While at Indiana, Mack played in 10 of the Hoosiers’ 12 games last season, recording 23 receptions for 310 yards and three touchdowns. His numbers were good enough to place him at fifth in receiving on the team.

Most of his production came in a 111-yard, 2-touchdown performance against Charleston Southern Oct. 7, as well as the season finale against Purdue, where he had 132 yards and a touchdown.

Mack, as a midyear enrollee, has already gotten used to Pitt and its campus. He said finds a sense of familiarity in Pittsburgh compared to his hometown.

“I like everything about it so far,” Mack said. “It reminds me of being home from New York — the city life is not really much different. I was able to adapt real quickly, and I’ve just been enjoying the process.”

He particularly enjoys Pittsburgh’s many food options. He said it’s a nice change from home.

“[I’ve been impressed by] how many food spots we have all around,” Mack said. “Being in New York, sometimes you have to go a little bit out just to get … food, but [here] there’s different varieties of food close by and that’s just what I’ve just been enjoying so far.”

Due to NCAA transfer rules, Mack will sit out the 2018 season. He will hit Heinz Field for the 2019 campaign as a redshirt sophomore. Mack will be joining a receiving core that already lost two playmakers, Jester Weah and Quadree Henderson, last year. He hopes to pick up where they left off.

“I just really hope to adapt to the culture that they’ve already set here,” Mack said. “[I need to be] able to improve certain things, just in terms of my ability to add speed onto the field, like stretch the field vertically and be able to adapt to what the guys already have done here and just add on and bring the team to the next level.”