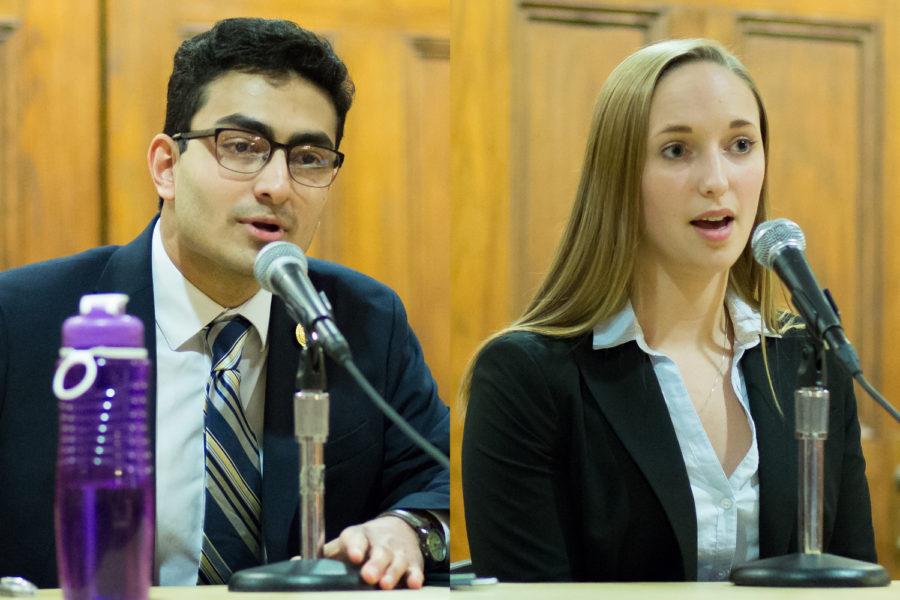 Maggie Kennedy will be the 2018-2019 Student Government Board president, winning 56 percent of the vote.

Polls opened at 8 a.m. today for the 2018 Student Government Board election, in which students can vote for one president and three board members to fill nine election positions on next year’s board. Ballots close at 8 p.m., and can be cast at my.pitt.edu.

There are 13 students are running for the nine positions under four slates – Legacy, Horizon, 582 Bridges and Neighbors. Each slate has different goals they would pursue if elected to further SGB’s relationship with the student body and the University.

While tabling outside of the William Pitt Union this morning, the candidates described their tactics to increase voter turnout, which last year was 30 percent – double the previous year’s turnout.

Candidates and volunteers began campaigning at midnight, scrawling chalk messages on sidewalks, staircases and walls around campus. Saket Rajprohat, a junior marketing major and presidential candidate running on the Neighbors slate, said he stayed out past 3 a.m.

“I woke up with about three hours of sleep, but I’m feeling great,” he said at noon outside the William Pitt Union.

About 10 of Rajprohat’s friends, supporters and other board candidates tabled for the Neighbors slate, while Maggie Kennedy, a junior political science and communications rhetoric major running for president on the Horizon slate, passed out buttons and fliers at the Horizon table.

“The most important thing today is that students vote,” Kennedy said. “We need a student government that is representative.”

Kennedy started her campaigning at midnight, passing out royal blue and yellow Horizon T-shirts to accepting students. Board candidates from the Horizon slate, including Jessa Chong, were also in front of WPU doing the same thing.

“Morale is really high,” Chong said, gesturing to the clear sky. “Students are happy to take fliers and hear what you’re willing to say.”

Lucy Pratt, a senior sociology major, took a flier from a Horizon volunteer and listened to him explain the platform. Afterwards, she said although this was the first she had heard of this year’s SGB election, their tactics were working.

“Honestly, no,” she said, when asked if she’d heard of the election. “I got an email this morning and didn’t read it, but they’re doing a really good job [tabling].”