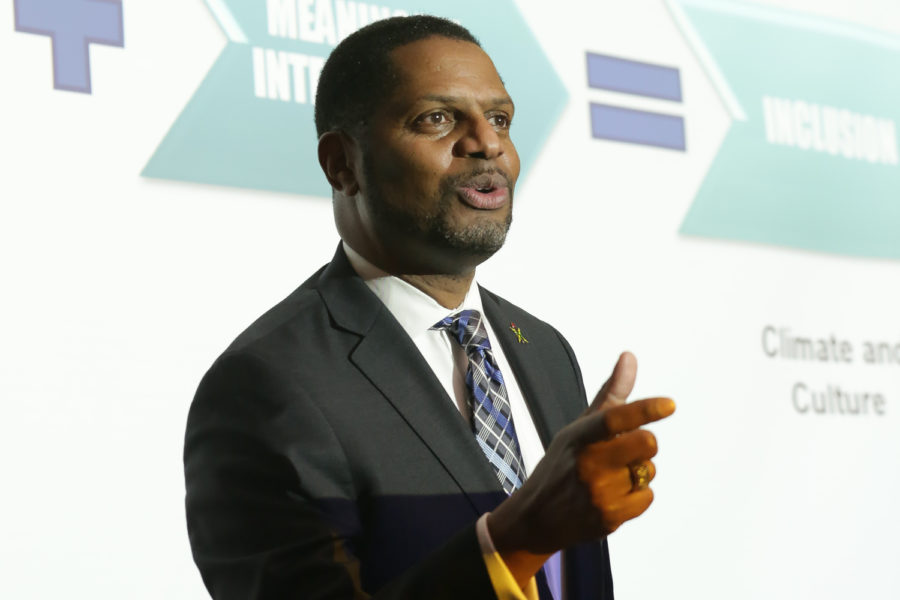 Since joining the National Society of Black Engineers in 1980, Karl Reid has dedicated his career to advancing opportunity and inclusion for African-American engineers across the country.

“I got my leadership experience largely through NSBE, and I discovered my passion, which is to increase access and opportunity for young people who are largely underserved and underrepresented,” Reid said.

More than 45 students and faculty gathered in Benedum Hall to listen to Reid, the executive director of NSBE, speak about the international nonprofit organization of more than 17,000 members and his experiences in the field.

Reid began as the society’s executive director in 2014 and has since worked toward improving the success of minority students in engineering. He developed a “tool kit” that considers aspects like social environment of a university and provides organizations with tools to increase the academic achievement of underrepresented students.

Reid emphasized mental and financial stability as keys for success as well. He also spoke from his experience working at the United Negro College Fund, where they found that $5,000 awarded to an African-American in their first year was associated with an 8 percent increase in graduation rate in five years.

“Money matters, so we’ve been working with United Technologies, with Chevron, etc., to increase the number of scholarships we can award to students because money should not be a barrier to becoming an engineer,” he said.

Reid touched on Pitt’s current stance on diversity and inclusion advancements. He said the Pitt chapter of NSBE partnered with the admissions office several years ago to increase the number of African-American students who apply and are accepted to Swanson.

He also argued that the success rate of minority students can increase through more encouraging environments, saying students who perceive social constraints — whether or not they are really there — are much less likely to excel.

“[If I believe that] no amount of effort that I put into this will result in any change in outcome, what will happen? I’ll start putting up my hands, I’ll find excuses as to whether or not I can be successful here,” Reid said.

But diversity and inclusion are only a means to an end, Reid said. The core of Reid’s strategy is providing students with the belief that it is possible for them to be successful. He said students need to be aware of their potential to avoid immediate despair in the face of failure.

“[Getting] a 38 on that first physical chemistry test, and wondering if I can really be here, if I should be here, was I admitted because my older brother was here?” Reid said.

When someone asked Reid after his presentation how the new leaders in Swanson can foster an inclusive environment, Reid stressed roundtables with student groups such as NSBE as a step toward involving and acting on behalf of more student input.

“Any great leader is a greater listener,” Reid said. “You have to create a safe environment where we’re engaging with them, because it is a two-way learning experience.”

Deanna Sinex, a graduate student studying bioengineering, liked the leadership opportunities and social participation that NSBE provided her with.

“I was the conference planning chair and also president of my chapter for two different years,” Sinex said. “You have that extra support not only from the faculty that mentored, but also the other NSBE members.”

Malik Roberts, a junior civil engineering major, agreed with much of Reid’s presentation, but built upon his thoughts regarding diversity as a tool for change.

“He mentioned diversity as the means to the end, and I feel that is very true,” Roberts said. “But I feel it should be more emphasized as one of the roots rather than just the method to get there.”

Roberts has been a NSBE member since high school, and said he stayed involved because of the positive social aspects and relationships that he’s formed.

“It gives me a community to plug into, people that I know have similar mindsets, similar experiences to me, that can actually relate to struggles I face as a minority engineer,” Roberts said.