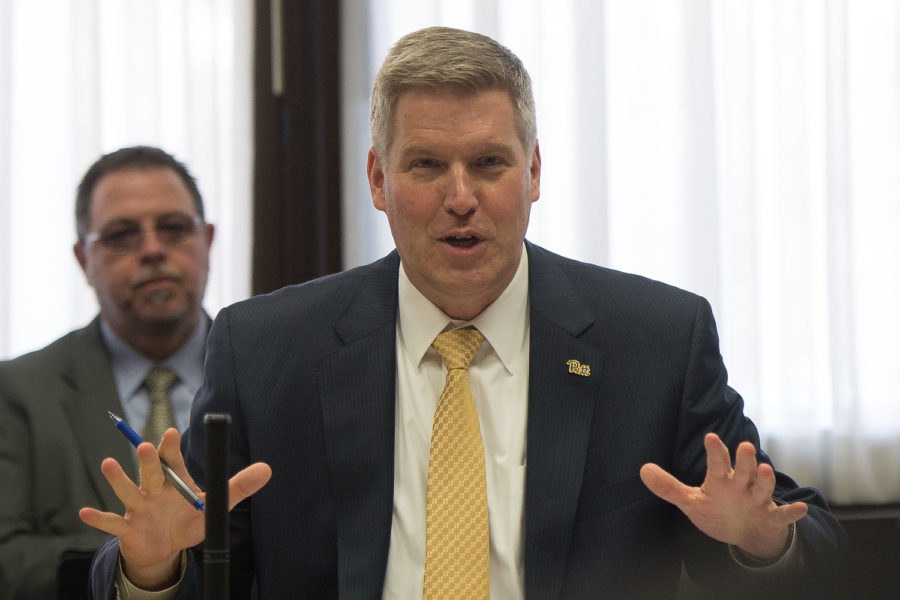 The University Senate Council held its second meeting of the spring semester Tuesday afternoon and addressed recently contentious topics such as building names and budget concerns.

Chancellor Patrick Gallagher started the meeting by discussing the current controversy about Parran Hall, which houses the Graduate School of Public Health.

The building — located on De Soto Street — is named after former Surgeon General Thomas Parran, who was the first dean of the School of Public Health. The debate rises out of questionable ethical standards Parran practiced in experiments on STDs and STIs.

In a Twitter thread on Feb. 13, the Pitt graduate union organizers condemned Parran Hall as a “constant reminder of the legacy of racism” in Pitt’s scientific and medical communities. Gallagher said the best way for the University to address this issue was through “deliberate thought.”

“We have tried to create a process where these kinds of issues could be systematically looked at,” Gallagher said. “We felt it was important to not have a reactive process that was doing this … through media attention or something where pressure was being put on.”

Gallagher then spoke on state budget changes and federal tax reform and how new policy would impact access to higher education. Gallagher said the proposed PROSPER Act is a “punitive bill” for many students. The PROSPER — Promoting Real Opportunity, Success and Prosperity through Education Reform — Act is intended to reauthorize the Higher Education Act of 1965, which was intended to strengthen educational resources and financial assistance for higher education among lower and middle income families.

House Republicans proposed the bill in 2017 as a way of decreasing government spending. The current Democratic stance on the PROSPER Act is it will do more harm because it will cut federal support students rely on.

The Council addressed another issue that directly affects students — the state of the Titusville campus. Student Government Board President Max Kneis expressed SGB’s support in repurposing the campus into an educational and training hub. If the University decided to repurpose the Titusville campus it would be owned by a third-party, Pitt and other higher education institutions.

SGB passed a resolution Feb. 13, which urged Pitt to make the Titusville campus into an education and training hub instead of closing it.

“We believe the hub will serve a wide range of constituencies in need, as well as improved collaboration in resource sharing,” Kneis said. “While we at SGB only represent undergraduates on this campus, we … believe the hub to be an innovative and exciting opportunity for the University.”

Andy Stephany, president of the Staff Council, also expressed support in repurposing the campus, advocating for the jobs of Titusville staff.

“Staff Council asks that University administration to provide clear and consistent employment support and communication to all Titusville staff members throughout the transition process,” Stephany said.

Frank Wilson, president of the Senate, applauded the University for its handling of the Titusville campus. He said Titusville sounded like a “good opportunity” to turn an unfavorable situation into a positive one.

“I would commend the University for the effort they put in for … a long period of time now trying to figure out how we could avoid the thing that we all don’t want to see happen, which is a closure,” Wilson said. “Just because Titusville is the smallest of us doesn’t mean that … they cannot be excellent too.”