Homeless identities on display at “Walk On By” exhibit 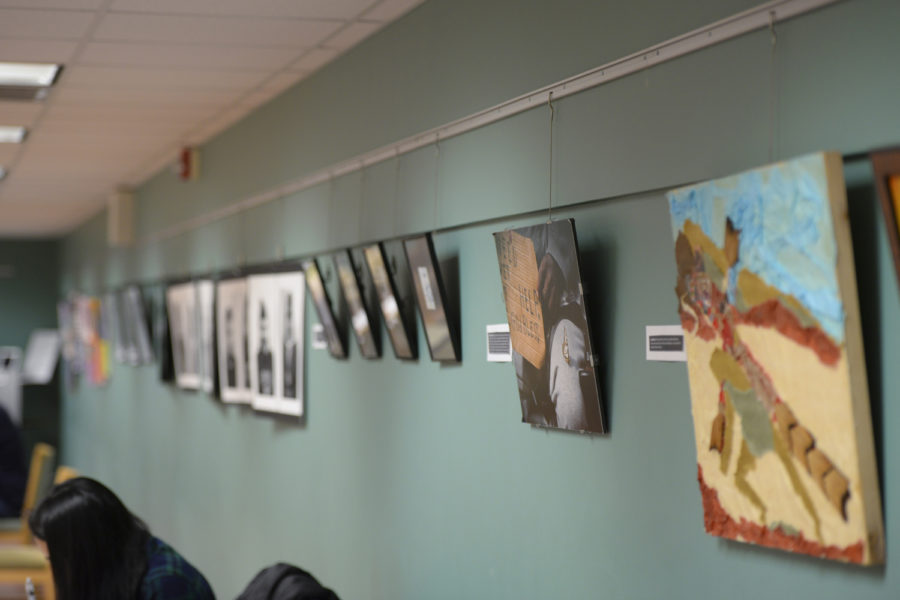 The exhibit “Walk On By,” sponsored by Northside Common Ministries, will hang in the second floor of Scaife Hall until the end of February. (Photo by Sarah Cutshall | Staff Photographer)

Renee Rosensteel passed the same homeless man in downtown Pittsburgh multiple times before she could no longer avoid his attention-seeking gestures and decided to stop and introduce herself.

“I knew he was part of the scene down there,” Rosensteel said. “I was tired. I’d just had enough, and I was just being human at that point.”

The homeless man gestured to his knee — a butterfly had landed there. He wanted her to take a photo, noticing her camera equipment.

Rosensteel said she felt guilty when she told the homeless man she had nothing to give him — not even a dime. To her surprise, the man then reached out and handed her a dime instead, which she accepted and thanked him for.

Rosensteel’s photograph of the butterfly from that day would become part of the art exhibit titled “Walk On By” — currently on display second floor of Pitt’s Scaife Hall through the end of February. Sponsored by Northside Common Ministries, the exhibit contains mixed media works that aim to tell the individual stories of homeless people in the area.

The exhibit is portrayed on two walls on the second floor of Falk Library in the shape of an “L,” showcasing posters, pictures, videos, illustrations and comics. The 11 participating artists examined and documented the everyday lives of homeless people to create their work — focusing on the lack of visibility many of them face.

Rosensteel said she’s aware that when approaching strangers, safety is something to keep in mind. The risks she is willing to take and the situations she perceives as dangerous may be different from someone else, but it is important to be open to the connection regardless.

“Stretch your comfort zone a little bit,” she said. “It’s okay to sort of follow your instincts on things, because things get complicated out there.”

Jay Poliziani, the director of NSCM and co-curator of the exhibit, said his purpose in curating the traveling exhibit is to inspire people to reach out to homeless individuals with a simple greeting, forging a path for activism through simple connection.

“The message they are hoping to convey is that through interaction with our brothers and sisters experiencing homelessness, we can open a wider dialogue which hopefully will lead to real concrete efforts to end homelessness in our area,” Poliziani, a 57-year-old Greenfield resident, said.

Jen Saffron, a local photographer and former adjunct professor in film studies and English at Pitt, has been with working on the exhibit since its conception, utilizing her background as founding director of the Pitt Arts program and director of communications for the Greater Pittsburgh Arts Council.

The 48-year-old Northside resident set up a portrait studio in a conference room at NSCM, where she shot 12 black-and-white portraits of people in the shelter — now displayed in the exhibit.

Saffron said she and the participants first sat down so they could tell her their stories of what brought them to this moment and share their goals and ideas for the future.

“It’s an exchange and an assertion that though someone may be experiencing poverty, they still have agency and self-determination,” Saffron said. “The portraits reflect this. The subjects in the photographs are looking right at the viewer, and many of them are laughing and smiling.”

Jennifer Saffron’s photos of homeless men and women from Northside Common Ministries are featured in the “Walk on By” exhibit in Falk Library. (Photo courtesy of Jennifer Saffron)

Each of Saffron’s portraits is named after its subject, emphasizing the importance of a homeless individual’s identity — a detail often ignored by passersby.

“These are not anonymous folks. They are people with stories and ideas of their own, despite their current situations,” Saffron said.

Working in the documentary format, Saffron said she attempts to bring social justice issues to the forefront of her work, often setting them in the context of the community by displaying them in public spaces, such as libraries. This allows her art to be seen and discussed by fellow artists, community leaders, students and educators who may confront critical issues like homelessness.

“The whole purpose of the exhibition is to raise awareness about the human condition, so bringing it into an environment with so much humanity — the public library — is perfect,” Saffron said.

The idea to have the exhibit travel through local libraries came from Polizini, who said the educational setting would promote the type of discussion they intended to create.

As co-curator, Polanzi was also responsible for reaching out to willing artists who had previously been employees and volunteers for NSCM or other homeless shelters in Pittsburgh.

Poliziani said the artists were excited to share their work from the moment the exhibit was in its beginning stages. “Walk On By” has been traveling through multiple local libraries since Spring 2017, beginning at the Future Tenant Gallery Downtown.

“Like any other segment of the population, individuals experiencing homelessness have a wide variety of life stories resulting in a wide variety of wants and needs,” Poliziani said. “The one thing they all share is the same as the one thing we each share — the desire to be acknowledged and respected.”