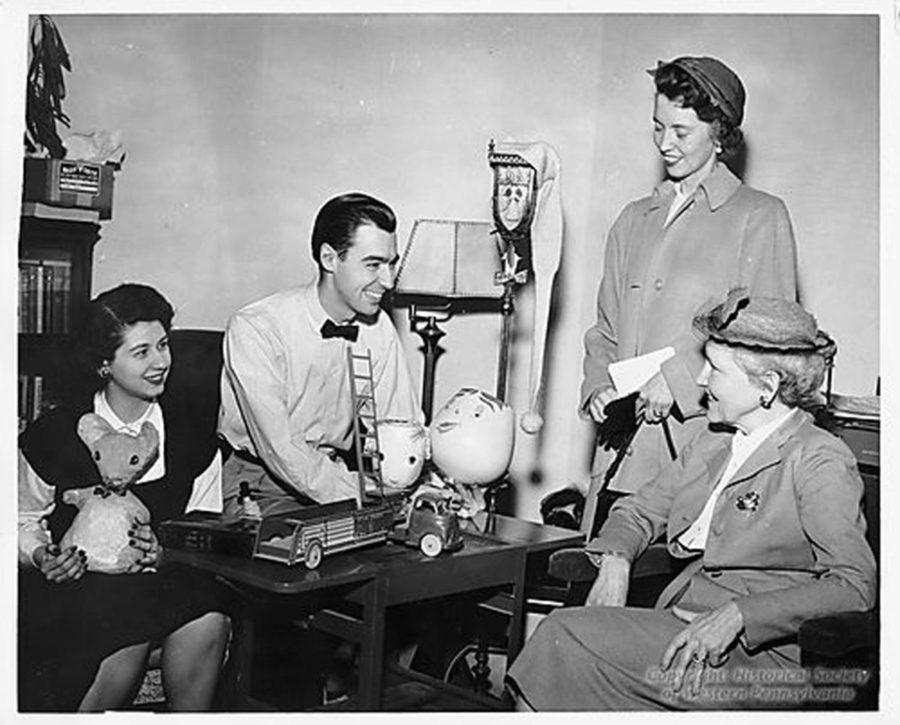 The iconic children’s show “Mister Rogers’ Neighborhood” turned 50 Monday. The show, which was broadcast from 1968 to 2001, was filmed in Pittsburgh and hosted by the late Fred Rogers. In honor of the show’s 50th anniversary, assistant news editor Janine Faust sat down with Elizabeth Mahoney, former head of Pitt’s now-dissolved Information Sciences Library, about the show itself and her work with the Rogers archive the library kept for more than 20 years.

Faust: I’m excited to be here talking to someone who was so involved with the archives.

Mahoney: Can I tell you what’s what before you get too excited?

We had the “Mister Rogers’ Neighborhood” archives in what was once the Information Sciences Library. It was called the Rogers Archive, and it was part of a collection in a room called the Elizabeth Nesbitt Room. In the early ’80s, some agreements were made between Family Communications Inc. — the company that oversaw the production of “Mister Rogers’ Neighborhood” — and the University to house his archives here, to respond to reference questions, to catalog the program and generally make it accessible to the public. So, the materials came. The work did not finish until 2006 or 2007. Over time, from 1984 onward, I can’t even tell you the number of people who touched these videotapes, watched these shows, assigned these records. I would be wrong if I didn’t mention two people — grad student Perry Recker and Laurel Povazan Scholnick, who’s now a library specialist at Langley Hall. In addition to the videotapes of all the programs in black-and-white as well as in color, we had puppets, we had scripts, we had fan mail, we had books related to the show.

We had tons of people sending postal mail, then email, calling on the phone and coming to visit the collection — people who wanted to use the collection because they remembered when their mom was on the show.

Schools change, so when they decided to close the Information Sciences Library in 2011, parts of our library were sent to Hillman, to storage, to special collections. But one of the hardest decisions was what to do with the things in the Elizabeth Nesbitt room. When Mister Rogers passed, he endowed a building at Saint Vincent College in Latrobe, his hometown — the Fred M. Rogers Center. It became clear we needed to move our materials there and bring the archives together. If you’re a scholar, don’t you want to go to just one place?

TPN: How often do people ask to interview you about the Rogers Archive?

Mahoney: Well, with the 50th anniversary, NPR and now you. In the past, when the collection was here, we had phone calls all the time. When Mister Rogers died, we had a number of people who called. I always pushed other people forward to answer questions. It was a great opportunity, though. Mister Rogers was different from Captain Kangaroo or Howdy Doody, because he put his energy toward making sure his show was developmentally appropriate for the three- or four-year-old. Did you watch it when you were younger?

Mahoney: What do you recall most about the show?

Faust: Uh, him entering the room and taking his outside shoes off and putting his indoor shoes on. That, and the Neighborhood of Make-Believe.

Mahoney: King Friday and Prince Tuesday and Queen Sara. And that mentioning of the shoes is critical. It wasn’t a shtick. Prior to Mister Rogers, other people did similar things. The difference was that Mister Rogers brought together the information he gained by talking and working with child psychologist Margaret McFarland and incorporated an appreciation for the arts. Local people like Joe Negri, who’s a famous jazz musician, to Yo-Yo Ma — Rogers had these people come on the show as friends in the Neighborhood.

Faust: What kind of impact do you think this show has had on American culture?

Mahoney: A significant impact. So many people will talk about how they learned how to parent from it. People would sing those songs — “What do you do when you’re mad about something?” They would use Mister Rogers as a mechanism to talk to their children. The people that came to see us, either they had been on the show or their family members had been on the show. They were so emotionally invested in the show — in what he gave them. He had an identified audience, and asked how we could talk about death, fire, scary things, the dark — these were all topics that he covered. Did it have an impact? Yes. His sweater is in the Smithsonian, for heaven’s sake.

Faust: What did you like most about your time overseeing the archive?

Mahoney: The best part was just the variety of questions. We had so many reference questions coming from so many different sorts of folks. One minute you’re answering an email, telling someone you’re so excited because you found the episode that her grandmother was in — and then you turn around and someone is saying they’re doing some research on the impact of television on children. Meeting Mister Rogers or Mr. McFeely might be what some others would say, and you know, that was great, but at the time I was so intent on the work — what needed to happen, what programs needed to be cataloged.

Faust: What do you feel you learned from being able to work with the material?

Mahoney: When I began working with the collection, I came with no understanding of Mister Rogers, no understanding of how important he was to Pittsburgh as a whole. After years of viewing the programs and seeing what went into the program and the part of Pittsburgh that he highlighted and what he brought to the City, I came to appreciate that he was a spokesperson for the City. We used to have people come to us and think there actually was a “neighborhood” somewhere in Pittsburgh. Maybe the thing that I took away from it most was an appreciation for the depth of the scholarship and research that went into the show. He made it look easy, but it was so much.

Faust: What was the most valuable thing the show taught people overall?

Mahoney: So much of what he did embraced the concept of civility. We need to be friends with our neighbors. We need to have compassion for, we need to understand people who are different from us. We need to be kind to our parents. A lot of his songs, like “What do you do with the mad that you feel” had to do with how to behave civilly in the world. I’m not a media specialist, I’m not a child psychologist, but in my view it’s the civility that overwhelmingly ran throughout all of his programming.