No. 1 Virginia vanquishes Pitt, 66-37, in last home game of the season 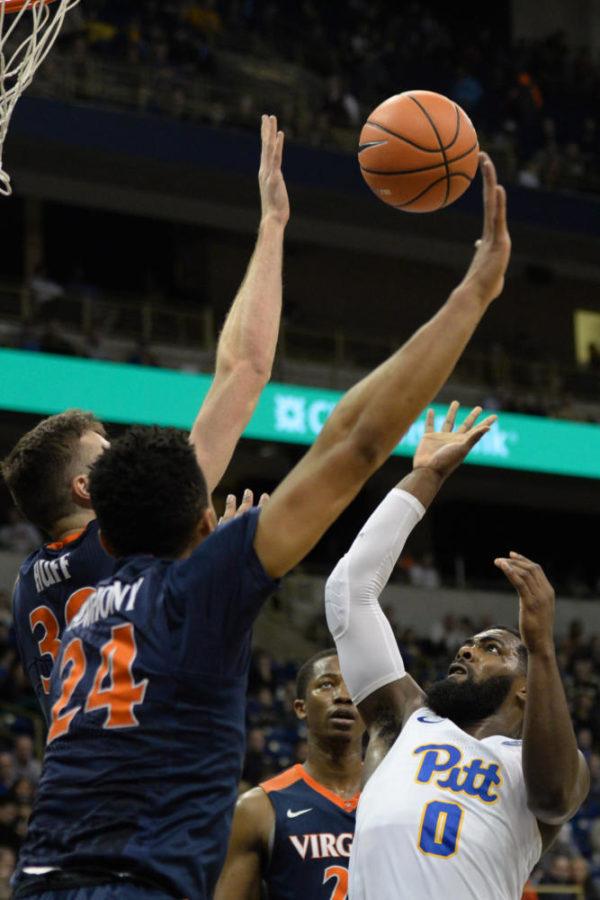 Jared Wilson-Frame has his shot blocked. He finished with 9 points, second on the team. (Photo by John Hamilton / Managing Editor)

The No. 1 Virginia Cavaliers secured their third ACC regular season title in the last five years Saturday afternoon. The Panthers also continued to set records, extending their losing streak to 17 in a loss against the best team in the nation.

Stallings sent out an unusual starting lineup featuring three of Pitt’s graduating members — guards Zach Smith, Jonathan Milligan and Monty Boykins — but the trio couldn’t stop Virginia. Senior forward Ryan Luther was the only member of the senior bunch who wasn’t on the court due to a foot injury.

[Click here to view the full gallery of game photos.]

The Cavaliers took a quick 8-0 lead in the first three minutes of the game, forcing Pitt to call a time-out. Out of the break, the Panthers cleaned up their defense, keeping Virginia to nearly three scoreless minutes.

Meanwhile, the Panthers’ offense continued to struggle. After free throws by Milligan, Pitt scored its first bucket 10 minutes through the first half on a 3-point shot from junior guard Jared Wilson-Frame. Virginia kept a 14-6 lead with 9:59 left to go.

After a free throw by first-year guard Marcus Carr, the Panthers’ last point before going on a nine-minute scoring drought, Virginia went on a 13-0 run, taking a 30-7 lead to close out the half.

The Cavaliers shot 52 percent from the field and 50 percent from beyond the arc in the first half. With eight different scorers for Virginia, sophomore guard Ty Jerome led the Cavaliers with a game-high 10 points.

The Panthers could not gather momentum in the first half, going 1-22 as a team, recording four turnovers and shooting at 4.5 percent.

Facing a 23-point deficit coming out of the break, Pitt struck first on a layup from sophomore forward Kene Chukwuka. But Virginia wouldn’t slow down and answered with a 7-0 run to bring the Cavaliers to a 37-9 lead.

The Panthers were able to keep pace with the Cavaliers, outscoring them 13-12 during the next six minutes of play. Despite that momentary flash of success, Pitt still trailed 49-22 with 10:21 left to play.

Virginia put the game out of reach after a 3-pointer from redshirt freshman guard De’Andre Hunter — who finished the game with 14 points and 10 rebounds —  left the Panthers trailing 55-25 with 8:55 on the clock.

The Panthers then kept Virginia to nearly four and a half scoreless minutes, managing to shrink their deficit to 55-31, but still couldn’t catch up as the clock wound down.

Despite a far better offensive showing in the second half — scoring 23 more points than in the first — the Panthers couldn’t best the Cavaliers, falling 66-37.

Virginia finished the game shooting 51 percent from the field and 50 percent from deep, and the Panthers shot 24 percent as a team and 28 percent from beyond the arc in what was a season-low 37-point showing.

Stallings expressed his admiration for Virginia after the game.

“Defensively, they just don’t have any weaknesses,” he said. “I thought we were a little intimidated in the first half, missing layups and missing shots right around the goal there.”

The Panthers have one last shot at a regular-season victory Wednesday when they take on Notre Dame in South Bend, Indiana. Tip-off is at 7 p.m.