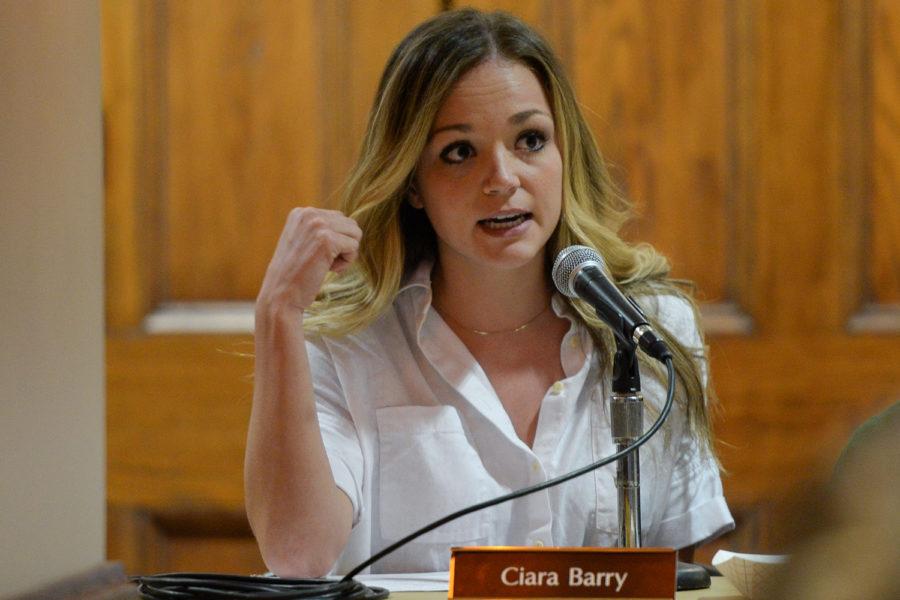 The resolution states that approximately 1,825 college students in the United States die each year from alcohol-related injuries. The resolution notes that Pennsylvania’s medical amnesty policy does not provide protection for the person receiving medical attention for alcohol related overdoses, unlike drug overdoses.

“The University of Pittsburgh Student Government Board believes adding legal protection to the state criminal code for the person receiving medical attention in an incident involving alcohol will create a safer environment for college students across the commonwealth,” the resolution said.

The resolution notes the Pitt policy that says the person seeking help for someone and the person experiencing the alcohol emergency won’t be charged with violating Pitt alcohol and drug policies.

But Kneis mentioned in an interview after the meeting that students can still receive a conduct violation from other authorities.

“People don’t want to call for help because they don’t want to get their friend in trouble,” he said. “This essentially does not de-incentivize people calling for help.”

The resolution is being introduced after Dean Kenyon Bonner placed Pitt fraternity Sigma Chi on suspension in January because of a “serious alcohol incident” involving a Sigma Chi member. All of Pitt Greek Life was also put on social probation because of the incident, meaning they cannot host, sponsor or participate in any social activities in which alcohol is present. Bonner said he will lift the Greek life probation after “meaningful progress” is made in improving the safety of Pitt sororities and fraternities.

SBG will be sending a copy of the resolution to all members of the Pennsylvania General Assembly.

After the first open forum, Executive Vice President Zuri Kent-Smith announced he has been appointed by Vice Chancellor for Diversity and Inclusion Pamela Connelly to create a committee to consider renaming Parran Hall.

Parran Hall is named after Thomas Parran Jr., the nation’s sixth surgeon general and the first dean of Pitt’s School of Public Health from 1948 until 1958. The name of the building has recently come under scrutiny due to Parran’s involvement in the infamous Tuskegee Syphilis Study, where treatment was withheld from hundreds of African-American men suffering from the disease for the purpose of research. The graduate student organizing committee started a petition to rename the building, which had 546 signatures Tuesday night.

“I found out about Thomas Parran’s history and controversy over the summer. The name has been on people’s minds for a while,” Kent-Smith said.

The first meeting of this committee will be in March, after spring break.

SGB also discussed internal changes at the public meeting. The board introduced a resolution that would update the process of selecting University Senate Council Representatives. The current process simply selects the three board members who received the most votes in the SGB elections. The bill would instead appoint the executive vice president, the title given to whoever receives the most votes in the board member elections, as well as the chief of finance and and chief of cabinet, two appointed positions.

“We just wanted to ensure SGB was as best represented as possible,” Kneis said. “Questions come up and the vice president have a better knowledge of specifics happening in various committees, as opposed to just general board members.”

Allocations Committee Chair Cory Stillman announced that “Allocations 101” videos have been filmed. They will be posted on the SGB website to show student groups the processes for requesting allocations and filling out supplemental forms.

Board member Ian Callahan announced a new grade-change system that would reduce the time it takes for a professor to change a grade. He said the registrar’s office is still working on finalizing the system.

Callahan also announced that the Dietrich School’s course descriptions site will no longer be used and updated. He said the reason it is shutting down is because the school is no longer able to continue investing in maintaining it. The registrar’s office will be expanding the enrollment information on Peoplesoft instead.

To start the meeting, Kneis also gave his congratulations to next year’s Board members, including incoming SGB President-elect Maggie Kennedy, and announced that the transition process has officially started.

“Maggie, I am excited to pass my gavel on to you, but I’m going to hold on to it for a few months,” Kneis said.

Political Science Student Association requested $3,264.04 for ground transportation and lodging for their annual trip to Washington D.C. The board approved in full.

Phi Beta Lambda requested $1,989.95 for ground transportation and lodging for its State Leadership conference in Harrisburg. The board approved in full.

Pitt Women’s Club Soccer requested $175.00 for competition expenses. The board approved in full.

Panther Airsoft Club Team requested $866.00 for general travel. The board approved in full.

Pitt PanthEARs requested $1,522.71 for airfare and lodging their annual trip to the American Academy of Audiology 2018 Conference. The board approved in full.

Pitt Rugby Football Club requested $1,302.48 for lodging for its NashBash Rugby Festival in Nashville. The board approved in full.

Men’s Ultimate Frisbee Club requested $2,225.24 for their Stanford Invite. The board approved in full.

Kappa Kappa Psi requested $2,628.81 for registration, ground transportation and lodging for its Northeast District Convention. The board approved $916.43 and denied $1,712.38.