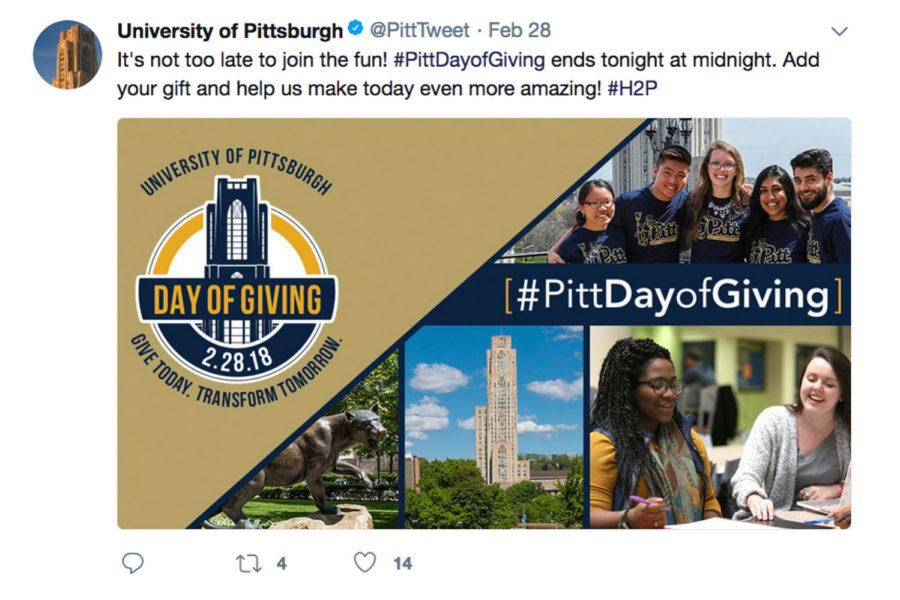 By Cassidy Power and Samuel Ruppert | For The Pitt News

Pitt’s second annual Day of Giving proved it’s the gift that keeps on giving — raising $9,029,828 in the span of 24 hours, nearly twice as much as last year. The 3,358 donations poured in from six continents and all fifty states.

Individual alumni and students alike pitch in on the Day of Giving to help support different schools, programs and student organizations within the University community. Participating groups are separated into three categories — School Participation, Pitt Programs and Experiences and Student Organizations. Bonus cash prizes are awarded to those in each challenge who received the greatest number of donations.

According to University spokesperson Kevin Zwick, Pitt raised $1.66 million for scholarship funds last year through the Day of Giving. Individual groups, such as the School of Pharmacy, chose to put donations towards scholarships as well.

The Pitt Fund was the second most-donated to the program this year, earning an additional $20,000 in prize money. The Pitt Fund provides scholarships to students who, for financial reasons, would otherwise be unable to attend college.

While the different schools of the University of Pittsburgh had donation numbers based on single-name donations, the programs and student organizations had numbers that were based solely on the number of gifts received.

The School of Pharmacy took first place in the School Participation Category for the second year in a row, acquiring the most single-name donations and taking the $30,000 prize. The Human Engineering Research Laboratories — which received 176 donations —  narrowly beat out the Pitt Fund — which received 157 donations — to take the $30,000 prize in the Pitt Programs and Experiences Category. The Men’s Glee Club, which accumulated a record 1,053 donations, beat out Pitt Club Tennis by 630 donations to claim the first-place prize of $10,000 for the Student Organizations Category.

Groups used many different methods to reach out to other donors. The Men’s Glee Club stressed on its Facebook page that people should donate multiple times in small increments to try and increase its total number of donations.

Rishi Gupta, a senior at Pitt and the President of the Men’s Glee Club said the group was persistent in contacting alumni donors.

“We tried to be more organized this year. We reached out to a list of alumni about a week or two before and then followed up again on the day,” Gupta said.

Young alumni donated from to various groups from locations all over the world this year, but some donations came from close to home, with 808 donations coming from University faculty and staff. These donations accounted for almost 40 percent of the total number received.

“Our two most popular Facebook posts from yesterday were both video clips from a gala earlier in the year,” Osborne said. “One was of our students singing the alma mater, which I think definitely pulled on the heartstrings. The other was a very emotional speech given by an alumnus about how special the School of Pharmacy is and how this place has really made his dreams come true.”

According to Gupta, the prize money the Men’s Glee Club received can drastically reduce the cost of participation for its members. The club plans to use their prize money to fund their upcoming domestic and international world tours.

“What this money will goes towards will be every year we go on a tour. Any fundraising we do subsidizes the amount members have to pay in order to go,” Gupta said.

For the Club Tennis Team, extra funding can make all the difference. Kynadi Mauney, a junior and co-president, stressed that funding from the school isn’t always enough.

“For a team like ours, where we have to go off campus to practice, the money is very helpful,” Mauney said.

“We are getting ready to renovate Salk Hall so some of the funds will go into the building renovations which are desperately needed … this is a really big win for us,” Osborne said.

Osborne stressed the importance of the day and its implications for the School of Pharmacy.

Brian Cuban, Pitt Law alumnus of ‘86, felt compelled to donate because of an issue close to his heart. As an advocate of addiction and eating disorder recovery, Cuban wants to see increased funding for mental health resources.

“I speak at a lot of law schools about student wellness. I know how tight budgets can be and how student mental health related initiatives may be something that the school wants to do but there is simply no funding for it,” Cuban said.

Lynn Shea, the director of communications of the Office of Institutional Advancement, said the Day of Giving isn’t just about increasing funding. Equally important is fostering engagement of Pitt students and faculty, past and present.

“At the end of the day, we are all proud to be a part of such a large and enthusiastic community,” Shea said.