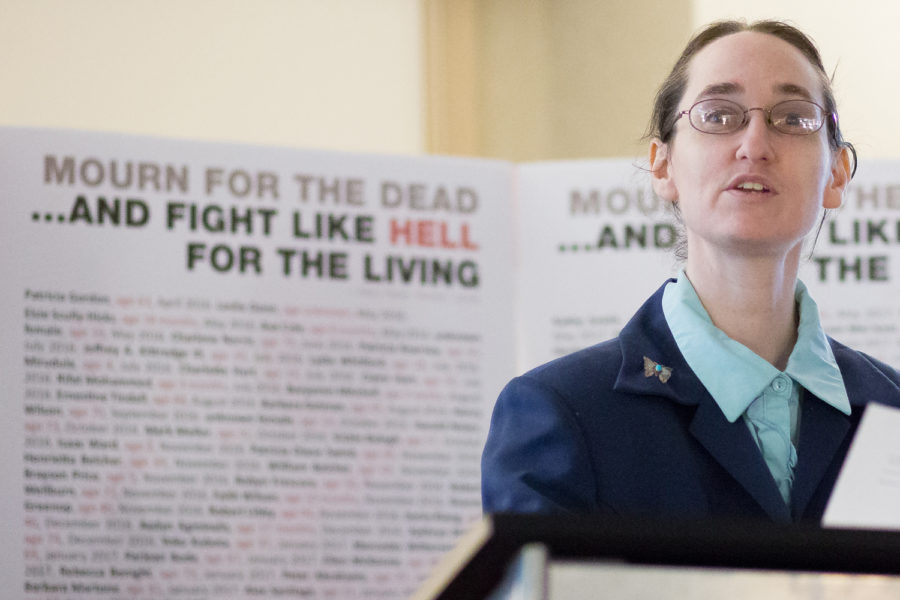 Andrea Mauro was physically restrained, force-fed horseradish and shocked with play buzzers as a child when they had tantrums or failed speech therapy exercises.

All of this was done to them by the people their parents had sought out to “help” them. Mauro, an autistic activist and student studying clinical psychology at CCAC, is a survivor of early intervention and Applied Behavior Analysis — a scientific discipline that employs techniques meant to change a person’s socially significant behavior. Far from being helpful, Mauro said the experience was “traumatic.”

“The reason why a lot of people didn’t think this was abhorrent in the long term was that I started acting ‘normal,’” they said. “It paid off.”

Mauro was one of several speakers present at the Pittsburgh Center for Autistic Advocacy and Pitt’s Students for Disability Advocacy group’s Disability Day of Mourning event. The event, which 30 people attended in the William Pitt Union Thursday evening, was part of a nationwide vigil.

The vigil, which has been held every year on March 1 since 2012, brings disability communities in cities across the world together to honor victims of filicide. “Filicide” is the legal term for a parent murdering their child. In the disability community, “filicide” is used when talking about a parent or other relative killing a child or adult relative with a disability. According to the Autistic Self Advocacy Network, an organization that seeks to advance goals of equal access, rights and opportunities for autistic people, filicide is commonly portrayed as perpetrated out of the relative or caretaker’s frustration or pity.

Different speakers at the Pitt event shared their experiences as disabled individuals during the event and called for an end to these actions.

According to the ASAN, more than 550 people with disabilities have been victims of filicide in the past five years. Research from the Ruderman Family Foundation has found at least one disabled person is killed by a relative or caregiver per week.

Cori Frazer, a director of the Pittsburgh Center for Autistic Advocacy, began the vigil. They said the event, besides being a day to remember those who have passed, is also an opportunity to bring awareness to these tragedies and demand justice for all disabled people.

“Tonight, we mourn for the dead,” Frazer said. “Tomorrow, and in the coming days, we continue to fight like hell for the living.”

Lauren Stuparitz, a prison abolitionist with Coalition to Abolish Death By Incarceration, echoed Frazer’s statement. She said the vigil was a “somber occasion, a significant one and a radical one.” According to Stuparitz, violence toward disabled people is pervasive through many realms of their lives, taking place in their homes, school and places of work. She said this violence is “dehumanizing” and “hurts us all.”

“Not only are we, our disability community, criminalized, abused, targets of ableist oppressions, aggressions and barriers … but some of us are killed,” Stuparitz said. “Disability is still being considered a real reason to hurt and kill us.”

Mauro said because of their autistic behavior, they were perceived as a tragedy to their family until their behaviors were “normalized” by the therapy.

“My autistic behavior is actually a fundamental lens of who I am. The therapy didn’t really do much for me other than really damage me,” Mauro said.

Mauro said the idea that something about them needed to be fixed is what causes the abuse and deaths of many disabled people.

“This narrative, that the ends justify the means, the value of a person can only be judged by what they mean to normal people and how palatable they are, is deeply damaging and deeply dangerous and leads to the murder of so many people,” they said.

Bethany Ziss is a disabled person and a pediatrician who spoke at the vigil. She said she is often met with questions as to why disability is considered a risk factor in the abuse and neglect of children. As a pediatrician, she often asks herself what doctors do to contribute to the stigma of disability. She presented a poem explaining how medical education has perpetuated disability stigma.

“In medical school, they didn’t teach us that it was OK to kill people with disabilities. They just rounded all the hospital floors and shook their heads, and clicked their tongues, and said, ‘He has no quality of life. She should be DNR … the best thing for him would be if he should earn his angel wings,’” she recited.

Michelle Walker, a speaker, consultant and founder of Lend An Ear Consulting, an organization that holds classes, seminars and individual consultations to teach people American Sign Language, found the idea that another person having the right and authority to end a disabled individual’s live “repulsive.”

“We deserve to be fought for. And I refuse to let anyone tell me or you any different,” she said.