Season in review: Men’s team has campaign to forget 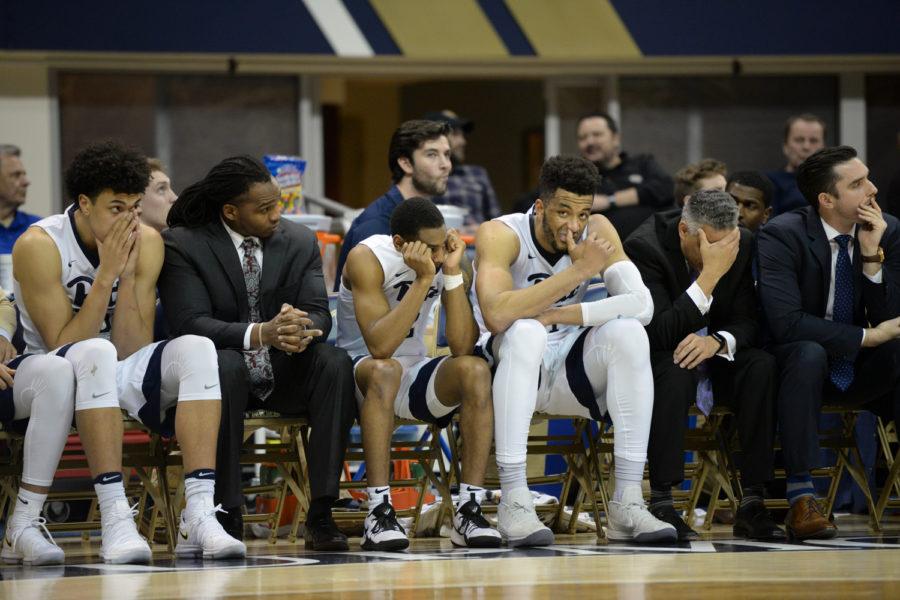 The Pitt men’s basketball season came to a close last Tuesday with a 67-64 loss to Notre Dame in the first round of the ACC tournament, and the 2017-18 Panthers are now history — albeit for not-so-great reasons.

Pitt finished the season with an overall record of 8-25 including 0-19 in the ACC. That win total marks the team’s worst since the 1976-7 season, and gave the Panthers the distinction of being the lone team in NCAA Division I basketball this season to not win a conference game this year.

If you’re a glass-half-empty kind of person, you might view this season as a total catastrophe. A testament of terribleness, the epitome of embarrassment, a fountain of failure — one could think endlessly of alliterations to illustrate the team’s poor performances.

If you’re a glass-half-full kind of person, you may be more inclined to shrug this season off as part of the rebuilding process. After all, Pitt’s core group of first-year players earned invaluable experience that will most certainly benefit the team going forward. While other programs will be losing players to graduation, the Panthers are on pace to bring back a fully reloaded roster, meaning the team can only get better from here — in theory. The rebuilding process, however, will now be more complicated with the firing of head coach Kevin Stallings.

But at least Pitt was good at something this year, even if it happened off the court. The Panthers placed a conference-high five players on the All-ACC Academic Team — an honor bestowed to each student-athlete who earns a semester GPA of 3.0 or higher. So take that, rest of the ACC!

The inexperienced Panthers came into the season with murky expectations, and the first two games solidified the notion that this could be a rough year for Pitt basketball.

Pitt dropped its opening game to Navy, 71-62, marking the first time the Panthers lost their season opener since 1996, and followed that up by losing their home opener to Montana, 83-79 in overtime. The Panthers committed an abysmal 19 turnovers as a record-low 3,102 fans watched from the Petersen Events Center seats, though that record was broken several more times this season.

But for all the losses and negative statistics that can be shown about this year’s Pitt men’s basketball team, they were able to accomplish something that last year’s team failed to do: beat Duquesne in the annual City Game. The Panthers avenged last year’s loss in the crosstown rivalry by knocking off the Dukes, 76-64, Dec. 1.

One of the season’s major turning points came during a home game against No. 18 West Virginia Dec. 9. The Panthers took the Mountaineers right down to the wire before collapsing in the final minutes to lose 69-60. Senior forward Ryan Luther was instrumental in the near-upset effort, leading Pitt with 13 points and 12 rebounds to notch a double-double.

That game showed the type of production and leadership that Luther provided to the young Panthers on a consistent basis, but it would be his last game of the season after he suffered a foot injury.

Luther led the Panthers in nearly every major statistical category at the time of his injury, including points per game (12.7), rebounds per game (10.1), 3-point percentage (.387) and minutes played. It’s easy to imagine Pitt avoiding a winless season in the ACC, had their senior leader remained healthy for the year.

The team made history in a Jan. 2 game versus Louisville when head coach Kevin Stallings elected to start five first-year players — Marcus Carr, Parker Stewart, Khameron Davis, Shamiel Stevenson and Terrell Brown — for the first time in program history. Those players would finish the season as team leaders in most statistical categories — Carr in minutes played, assists and steals, Stewart in 3-point field goal percentage, Stevenson in rebounds and Brown in blocks.

The Panthers lost that matchup 77-51, but it wasn’t the loss or Stallings’ roster moves that made headlines. During the game, Stallings turned around and yelled back at a heckling Louisville fan, “At least we didn’t pay our guys $100,000.” The comment — which served as a talking point for sports news outlets over the next day or two — referred to the FBI investigation that found the Louisville basketball program to be guilty of several recruiting violations, including working with Adidas to offer one prospect, Brian Bowen, $100,000 to sign with Louisville.

Now, those comments are coming back into play. Stallings was fired as head coach on March 8, although the details regarding his multimillion dollar buyout are still unclear. Pitt reportedly offered Stallings a reduced buyout of $4.8 million — significantly less than his estimated $9.4 million buyout in his contract — and is threatening to use those inappropriate Louisville comments as leverage to fire him with cause.

Whichever candidate is willing to take a chance on the Panthers will find themselves leading a roster that should return nearly all of its production from the past season. In addition to the core group of rising sophomores, Pitt should also bring back junior forward Jared Wilson-Frame, who led the Panthers in scoring after Luther’s injury.

And despite being in his last year of eligibility, Luther may still be able to play for the Panthers next year. He plans to apply for a medical hardship, a waiver that allows college athletes to gain an extra year of eligibility if they play less than 30 percent of the team’s games in a season.

Luther and Wilson-Frame — along with junior transfer guard Malik Ellison, who was forced to sit out the 2017-18 season due to NCAA transfer rules after coming to the program from St. John’s — should form a competitive coalition alongside Pitt’s first-year players who gained significant playing time this season.

As for the 2017-18 season, it will still go down as one of the worst seasons in Pitt basketball history. But hopefully it will be soon forgotten, considered a momentary blip in an otherwise consistent program, rather than the beginning of a long-term downfall.