Column: When it comes to Stallings’ firing, the blame should be shared 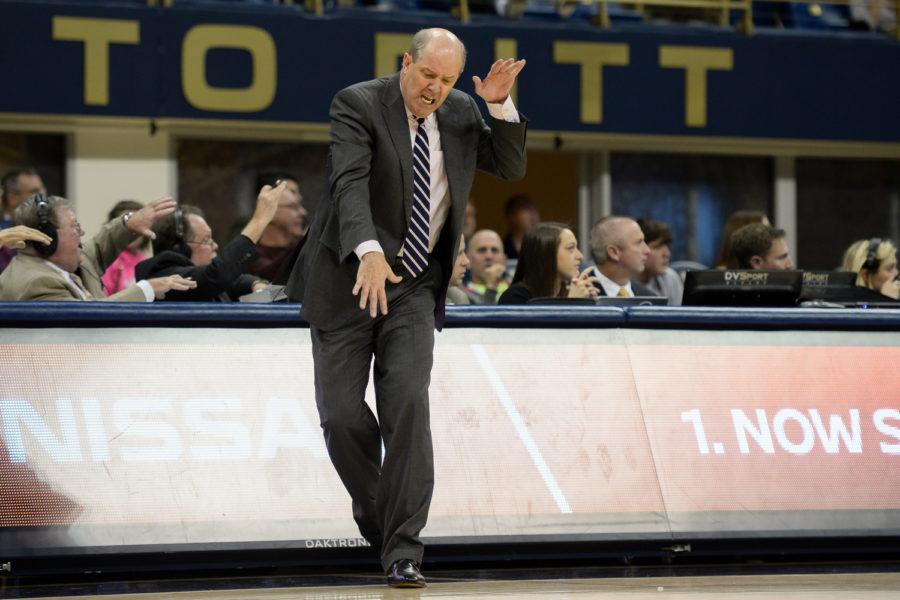 In a time of uncertainty for Pitt basketball, one thing is for sure — former head coach Kevin Stallings’ tenure will go down in Panther history as an unmitigated disaster.

In two years, the widely criticized coach managed to win just four conference games, go winless in the ACC during the 2017-18 season and break the school loss record while holding the school record for consecutive losses.

When anything goes as poorly as the last two seasons have for the Pitt men’s basketball team, the first thing the administration wants to do is find who’s to blame. Stallings isn’t the only one bearing the weight, though.

Stallings entered a fan base that was ready to dislike him from the start. He was caught in the same recruiting whirlwind that started to sink former Pitt and current TCU head coach Jamie Dixon. His prickly personality rubbed some older players and fans the wrong way and he showed little signs of tangible improvement.

Former athletic director Scott Barnes hired Stallings on his way out, which is a good place to start in the long-winded travesty. Barnes didn’t block transfers, strike out on the recruiting trail, ostracize his older players in public spats and fail to bring any energy to the Petersen Events Center, but he did give Stallings a platform to do so.

The hiring was ill-conceived from the start and was almost immediately pegged as destined to fail. When the hiring was announced, Stallings wasn’t exactly a hot commodity after a 17-year semi-successful stint as Vanderbilt’s head coach.

His tenure saw him fail to ever take advantage of talented teams in the SEC — a conference that, in recent years, pales in comparison to the powerhouse that is the ACC. Since 2010, the ACC has won four National Championships — Louisville included — and the SEC one.

Yet, it’s hard to separate some of the pitfalls — or just plain pits — Stallings fell in from those the previous staff did. Dixon saw a downturn in ability to recruit highly touted players in his last years, bringing in only two four-star recruits in Michael Young and Damon Wilson between 2013 and 2015.

Pitt’s move to the ACC in 2013 also brought with it a strange revelation — Pittsburgh is in a bind due to its Midwest-adjacent location. The former coaching staff, which specialized in recruiting the Northeast, wasn’t prepared to compete along an entire coast for players.

For Stallings, who came in with nearly two decades recruiting in the South under his belt, managing to bring in a deep class of first-year players — none of whom had immediate program-altering impacts —  was nearly a success.

The issues arrived for Stallings with the 2018 recruiting class that seems, so far, like a step back from the 2017 class — which is saying something when the expectations were probably, at best, lukewarm.

But getting players on the court was just the start of a struggle.

For a man touted as old-school and offensively minded, Stallings couldn’t convert his reputation of offensive discipline and execution into victories for the Panthers. After so many missed backdoor cuts and listless passes around the perimeter resulting in contested threes, you come to the conclusion that it was more than simply the growing pains of a young team.

The fatal flaw of the Stallings era was the air of inertness in improvement. If the lows were located in the first half of his unusually short time in Pittsburgh, it would have been painful, but understandable. Instead, the two worst moments — the 55-point loss to Louisville and the seven-point first half against Virginia — were in separate years.

Ultimately, there is more than enough blame to go around. As these things often go, it was a confluence of perfectly terrible circumstances.

It wasn’t entirely his fault, but he didn’t do a ton to help himself either. One thing’s for sure — Pitt needs to make the right decision with its next head coaching hire, because for however bad it is now, it can always get worse.