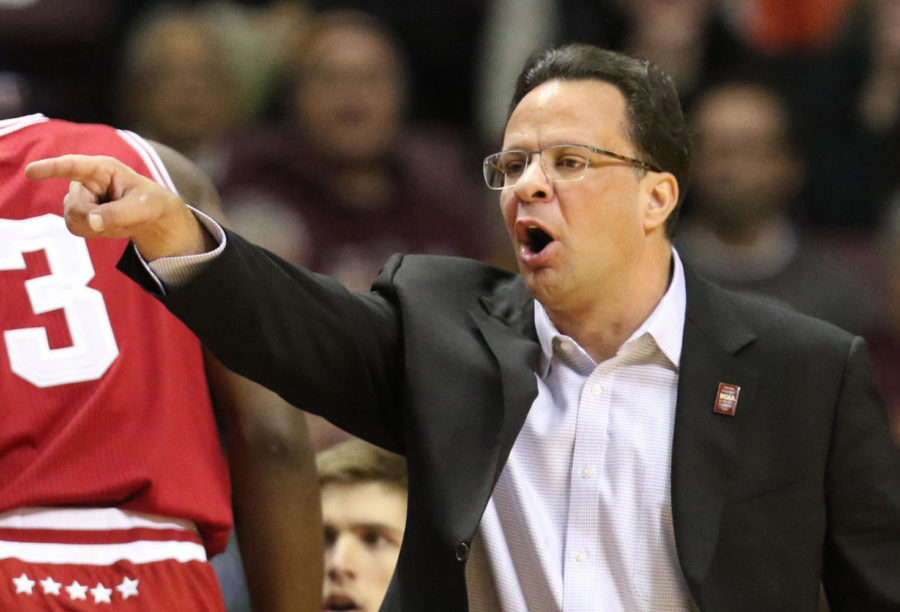 Then-Indiana head coach Tom Crean yells instructions to his players during the first half against Minnesota on Saturday, Jan. 16, 2016, at Williams Arena in Minneapolis. (David Joles/Minneapolis Star Tribune/TNS)

Pitt men’s basketball and the athletic administration are officially on the quest for a new head coach to replace Kevin Stallings.

The mission is straightforward — find the perfect person to rejuvenate the program and return Pitt to its status as a basketball school. Just like any hiring process, a candidate must have proper qualifications — years of experience, proper age, high success and realistic chances as a coach are all factors in who Pitt will hire.

Here is a list of potential coaches that Pitt should have an eye on during its search.

The former Indiana head coach has the best track record among all of these candidates, which makes him the top choice. Prior to Indiana, Crean coached at Marquette for nine seasons and went to the Final Four in 2003 — his fourth year with the team. He took over a historic Indiana program in 2008 and went on to coach the Hoosiers through 2017 — winning the Big Ten conference in 2013 and 2016.

Throughout his career, Crean has produced three top-five picks in the NBA draft with Dwyane Wade at Marquette and both Victor Oladipo and Cody Zeller at Indiana.

What makes him the ideal candidate is that he is only 51 years old. Age is vital to a candidate for a program looking to have a coach stay for a long enough time. It was considered strange when Pitt hired Kevin Stallings at age 55 — a retirement-worthy age.

Crean has been working at ESPN as an analyst since being fired from Indiana in 2017, deciding  to take the year off of coaching despite many schools trying to hire him. Many pundits and fans thought he was a great addition to the ESPN coverage team this past season, but Crean has plenty of time to get back into the coaching game.

Compared to the other coaches on this list, Crean brings a winning culture and great recruiting to Pitt — something that the Panthers need in their program right now. A bonus is Crean was an assistant coach at Pitt in 1994.

Hurley is arguably one of the top names in coaching circles right now. His Rhode Island Rams have won 25 games the past two seasons and made the 2018 NCAA Tournament, signaling success for the mid-major program.

Named Atlantic-10 coach of the year this past season, Hurley previously coached at St. Benedict’s Prep High School in New Jersey for nearly 10 years. He then coached at Wagner College for two seasons before being hired by URI in 2012. He comes from a basketball family — his father, Bob Hurley, was a legendary New Jersey high school coach at St. Anthony’s and his younger brother, Bobby Hurley, is the current Arizona State head coach and a former Duke point guard.

Hurley has amassed a 147-104 head coaching record and is just 45 years old. It looks as if both Pitt and UConn will be fighting over who gets to hire Hurley, but Pitt being in the ACC should be an edge over UConn in the American Athletic.

Hurley’s knowledge of top-ranked high school talent from his experience at St. Benedict’s Prep should translate to recruiting better than other coaches on this list.

An unfamiliar name to many, Becker has had recent success at mid-major Vermont. Since joining its program in 2011, Becker has led the Catamounts to two NCAA appearances in 2012 and 2017. He has also been named the American East coach of the year three times — in 2014, 2017 and 2018.

With a record of 166-77 at Vermont, winning at least 20 games in each of his seven seasons at the school, Becker would be a solid coaching choice for Pitt. He has built a successful program at Vermont, and most believe he can do the same at a bigger school with more resources to recruit top talent.

Becker is also a very realistic hire for not a high price, especially with Crean and Hurley taking bigger offers elsewhere. He brings the Panthers a tough defensive attitude that other coaches could not offer as well.

Musselman, 53, could be the most qualified coach on this list, but again, another the casual fan has never heard of before. He was a head coach in the NBA for the Golden State Warriors from 2002 to 2004, and for the Sacramento Kings from 2006 to 2007.

Since arriving in Reno, Musselman has gone 79-28 and made the NCAA Tournament the past two seasons. On top of having a great record, Musselman is known to be a tremendous player developer, with many NBA and college players crediting him with their success.

All of the jobs Musselman has held demand a coach who can get the most out of their players, and help them get better. Pitt is a perfect spot for Musselman to come in and help grow the talent that is already here.

His resumé speaks for itself, and it’s time he gets an opportunity to become a head coach in a Power 5 conference. No other coach being considered has the NBA experience like Musselman, which brings a more mature and helpful skill set to the program.

The former Robert Morris and current St. Bonaventure head coach Mark Schmidt is ready to make the leap from a mid-major to the big leagues.

Schmidt, 55, has a career record of 273-241 with 191 of those wins coming at St. Bonaventure. He has led the Bonnies to three straight seasons of at least 20 wins, and has made the NCAA Tournament this year and in 2012.

His recent success makes him a candidate for the Pitt job, but his age may be a turnoff to fans. Though his local experience at Robert Morris may give him an edge over other candidates, Pitt should only look at Schmidt if other preferred hires fall through.