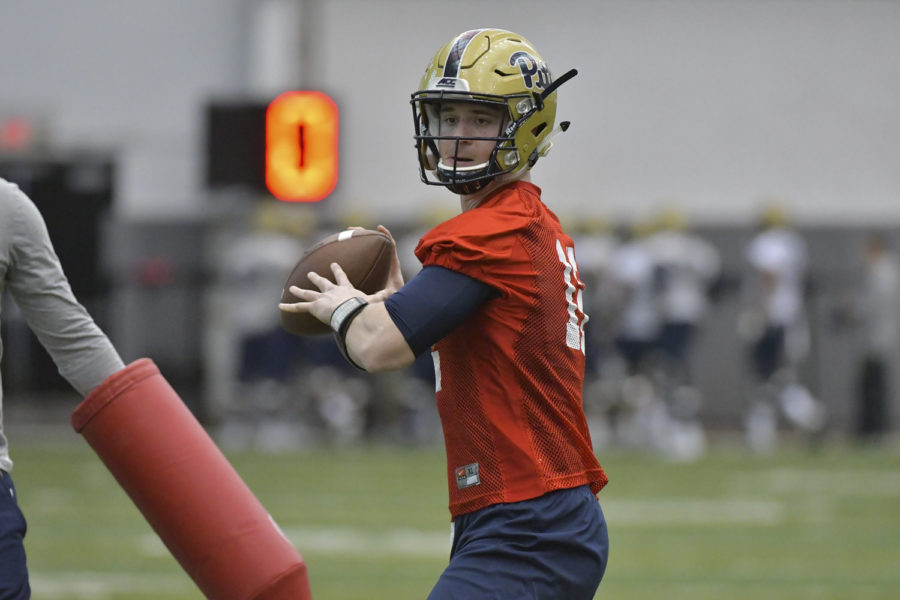 Ricky Town was recruited for the Panthers’ football team earlier this winter, making Pitt the fourth college he has played for since graduating from high school. (Photo courtesy of Pitt Athletics)

But despite his winding journey across college football, the quarterback has yet to play a single snap of Division I football.

Town was aggressively recruited out of high school. Currently listed as a three-star recruit, Town was the fourth-ranked quarterback out of California in 2015, behind big names like UCLA’s Josh Rosen and Washington’s Jake Browning.

Town committed to USC over top-tier offers that included Florida State, Georgia, Miami and Stanford. He had previously committed to Alabama but decommitted after offensive coordinator Doug Nussmeier left for the University of Michigan.

“[Town] has an advanced feel for the game that is way beyond his years,” Greg Biggins wrote for 247sports. “[He] boasts a strong arm and the quickest release in the region. He’s not hyper-athletic but does a great job moving around the pocket.”

He chose Ventura College, located in his hometown of Ventura, California. Town threw for 1,160 yards and 12 touchdowns with a 60 percent completion rate for Ventura in 2017, playing under head coach Steve Mooshagian, a former offensive coordinator at Pitt from 1997-1998.

Town came into contact with Pitt’s coaching staff during the offseason and decided to make his return to Division I football with the Panthers.

“It was just a unique opportunity,” Town said on a Pitt LiveWire video. “I could definitely see myself helping this team. I got to meet with Coach Watson and Coach Narduzzi, and I knew those were the two men I wanted to play for.”

Town, who arrived on campus this semester, has already gotten used to Pittsburgh climate, 2,500 miles away from Ventura.

“Pitt’s been great so far,” Town said in an interview. “I’ve really been enjoying my experience of getting to walk around and seeing Pittsburgh and all of the history. The snow’s definitely different than Southern California, but all in all, it’s been a really nice place.”

With two years of eligibility left at Pitt, Town wants to make an immediate impact. He will have to compete for the starting job with soon-to-be sophomore Kenny Pickett, who led Pitt to one of the greatest upsets in program history in his only start last year against No. 2 Miami. Despite this quarterback competition, Town says he has already developed a close relationship with Pickett.

“First day I got here, Kenny hit me up and we went and threw,” Town said. “Kenny’s a great guy. I’m looking forward to competing with him and learning from him and helping each other out.”