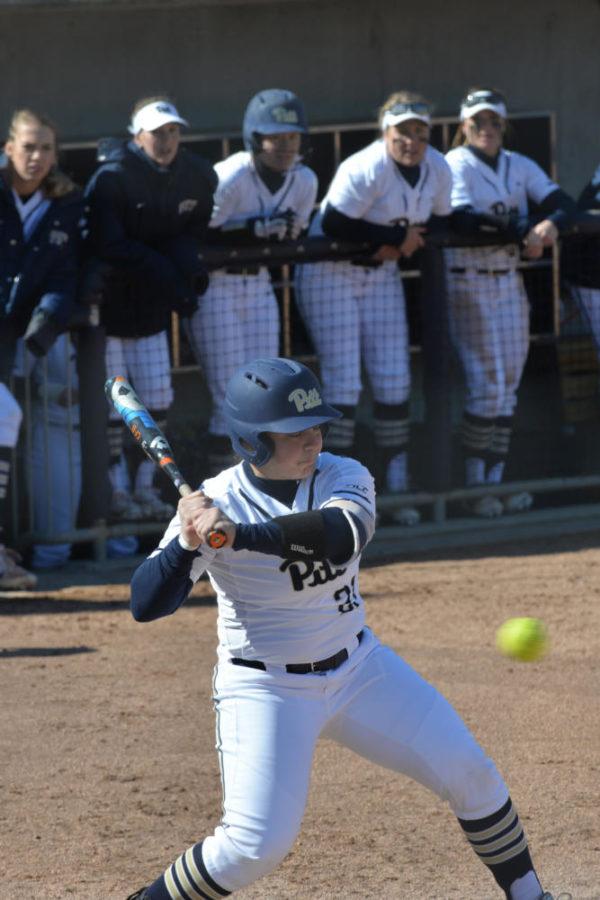 While the Pitt swimming and wrestling teams send their top individuals to compete at end-of-season tournaments, the baseball and softball squads are just beginning to get into the swing of things. Here are some of the Panthers’ top performers during the transition from winter to spring sports.

The Pitt softball team stayed busy over spring break, as the Panthers played a grueling 10 games in nine days. Pitt recorded an even 5-5 record over that stretch, and senior catcher Georgina Zeremenko asserted her place as the Panthers’ most potent offensive weapon.

Zeremenko leads the Panthers in most offensive statistics including home runs (seven), batting average (.329) and on-base percentage (.407). In the first game of the Panthers’ weekend tournament in Boca Raton, Florida, Zeremenko’s fourth-inning home run helped cement a 6-1 victory over Ball State. Pitt faded down the stretch with losses to Michigan and Stony Brook, but Zeremenko still managed to knock three doubles combined in the losing efforts.

Zeremenko and the Panthers will travel down to North Carolina for their next game against the Tar Heels Friday, March 16, at 6 p.m.

Since the baseball season started Feb. 16, the Panthers have cruised through their nonconference schedule with 10-2 record. Redshirt senior pitcher Matt Pidich is a large reason for that— through four starts, his earned run average sits at just 1.19.

Pidich has been a model of consistency so far for the Panthers’ pitching staff. He’s gone at least five innings in all of appearances and has yet to suffer a loss or give up more than one earned run in a game. Pidich’s dominance was on full display in a March 3 game versus Butler, in which he pitched six shutout innings while striking out nine batters and giving up just two hits. The Panthers won, 3-0.

Pidich will look to keep up his hot streak in the Panthers’ next game, which is set for 6 p.m. Friday, March 16, against in-conference foe North Carolina.

Despite being on the same squad as talented and accomplished senior diver Meme Sharp, Pitt first-year diver Lydia Rosenthall notched the best finish for the Panthers’ diving team on the first day of the 2018 NCAA Women’s Swimming and Diving Championships Thursday, March 15, at Ohio State’s McCorkle Aquatic Pavilion.

Making her NCAAs debut, Rosenthall notched a team-best 33rd-place finish on the one-meter springboard after scoring 262.85 points on six dives. She’ll look to top that performance on the three-meter springboard, which starts at 11:30 a.m. Friday, March 16.

Senior wrestler Dom Forys was one of four Panthers to qualify for the 2018 NCAA Wrestling Championships. Wrestling in the 133-pound weight class, Forys was the winningest Pitt wrestler this season, tallying a record of 21-4.

In his first-round NCAA Championship match Thursday, Forys pinned Penn State’s Corey Keener in four minutes and 57 seconds to advance to the round of 16. The victory marked the second straight year in which Forys took down Keener in the opening round of NCAAs —  he recorded a 10-2 major decision in the same match in 2017.

With the win, Forys became one of two Panthers to advance in the tournament along with redshirt sophomore Taleb Rahmani. Forys will look to outperform his 2-2 tournament record from 2017.