Students find furniture and more free and for sale 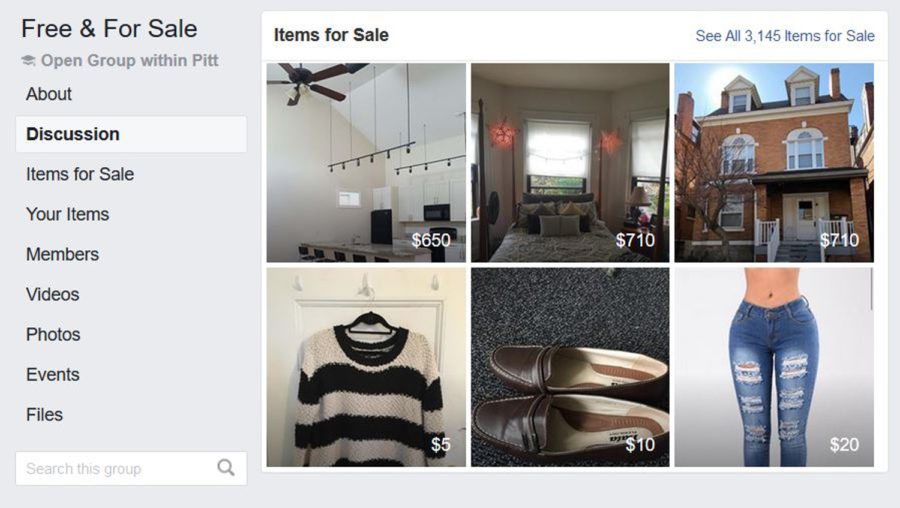 Picking up the couch wasn’t supposed to be an all-day affair.

Kathryn Kennedy and her boyfriend Andrew Rabeneck planned to quickly move it into Kennedy’s newly rented — and bare — apartment, order pizza and watch Star Wars from the comfort of her new couch.

But they didn’t know what would lie ahead.

Kennedy, a 2017 Pitt graduate, and Rabeneck, a senior and chemical engineering major at Pitt, picked up the long, tan couch from South Oakland and transported it in Rabeneck’s mom’s minivan.

After nearly damaging the roof of the van and a failed attempt at getting the couch through the apartment building entrance on the hot, sticky July day in 2015, Kennedy and Rabeneck were ready to give up. They dumped the $20 couch in a nearby dumpster, called it a day and ate their takeout pizza while sitting on the apartment floor.

They found the couch on Pitt’s Free & For Sale Facebook page — a concept that occupies a space in between yard sales and eBay. Free & For Sale pages at Pitt are a constant virtual market, with users buying and selling items at all hours of the day and night with people who are often strangers.

Some students, such as Michelle Garcia, a first-year psychology major, have used Pitt’s site and only had positive experiences. Garcia has sold several pieces of clothing — including a jean dress a few weeks ago — as well as textbooks and a calculator. She said it’s a great system, especially for college students.

“It’s more accessible [than brick-and-mortar store shopping], especially in college if you can’t go out and you’re really busy and have people around you, and you’re able to go to them really quickly to buy new things at a cheaper price,” Garcia said.

While that may be true for Garcia, not all users feel the same about Free & For Sale’s potential to change buying habits. Jeanne Batog, a first-year civil engineering graduate student at Pitt, doesn’t think Free & For Sale is doing anything to shift students away from traditional consumerism.

“Generally, people that want new things will buy new things,” Batog said. “And if there wasn’t a buy-and-sell Facebook page, people would still be selling their things on Craigslist.”

But there are some advantages to using the Facebook group rather than another selling site. Lynnea Lombardi, a Pitt junior and communication major, is selling a Michael Kors satchel on the page and said she also has the bag posted on Poshmark, an online buying and selling marketplace. If Lombardi sells the bag on Poshmark, 20 percent of the profit will go to Poshmark.

“I’m hoping that the item will sell on the Free & For Sale page, because it seems a lot simpler to just meet someone on campus than to have to ship it to someone in another part of the country, and I’ll get to keep all of the money,” Lombardi said.

Both Lombardi and Batog are active on both Free & For Sale, which currently has 12,936 members and is a Facebook-borne concept, and Free & For Sale: Oakland — the smaller, student-controlled buying and selling Facebook group for Pitt students.

The page Free & For Sale: Oakland, with more than 4,600 members, is something of an online University heirloom, currently under the administration of four Facebook users. One of them is 2015 Pitt graduate Michael Spak. He said one of the most defining elements that separates his group from Facebook’s version is the stricter guidelines for what users can and can’t post in the group.

“The group was started because there was another “Free & For Sale” page, but there was constantly spam on it as well as housing posts, etcetera,” Spak said. “The [Free & For Sale: Oakland] page was created as an alternative that could be monitored better.”

Spak believes the page started in 2014, but doesn’t remember who passed the admin position down to him. He takes the administrator responsibility seriously, monitoring the page almost daily and taking down posts related to subletting and other unapproved entities, as well as older posts. For this reason, it wasn’t possible to find Kennedy’s 2016 couch transaction.

In contrast, Pitt’s Free & For Sale group comes from Facebook itself. The page, though, says a user named Sahil Amin — who is also an undergraduate researcher at Pitt — is and has been the page’s admin since 2012.

The official Pitt group, with current membership at about 37,000 Facebook users, requires a Pitt email to join. While the group may be intended for Pitt students, Facebook’s “Pitt Community” page says the group has no affiliation with the University of Pittsburgh.

Spak regulates his group to keep the Free & For Sale: Oakland page from turning into a buying and selling free-for-all. Spak also said if he doesn’t maintain and monitor the page, it Facebook may archive it, rendering it unusable.

But for Batog, these boundary lines between pages don’t appear to have as much meaning. She believes the page is useful for anything users may want to buy or sell — including requests for parking spots she made on both the Free & For Sale page and Free & For Sale: Oakland page.

She requested a parking spot on North Dithridge Street or in Schenley Farms on Feb. 1. While sitting at a lofty price of $6,484,056,784 — not a serious price she was actually willing to pay — the request didn’t yield successful results. Batog also said she’s been able to sell furniture on the page, but the page’s success ultimately depends on the user.

“Sometimes I find it is frustrating that people don’t update their post with what has been bought and what is still for sale,” Batog said. “I think it’s a good system, but depends who is using it and how efficiently they are using it.”

And unlike Amazon or other conventional buying methods, there’s no return policy. It’s like a yard sale — if the mirror turns out to look terrible on the wall, the buyer will have to figure out reselling it on their own.

That, or take the easy way out and toss it in the dumpster.