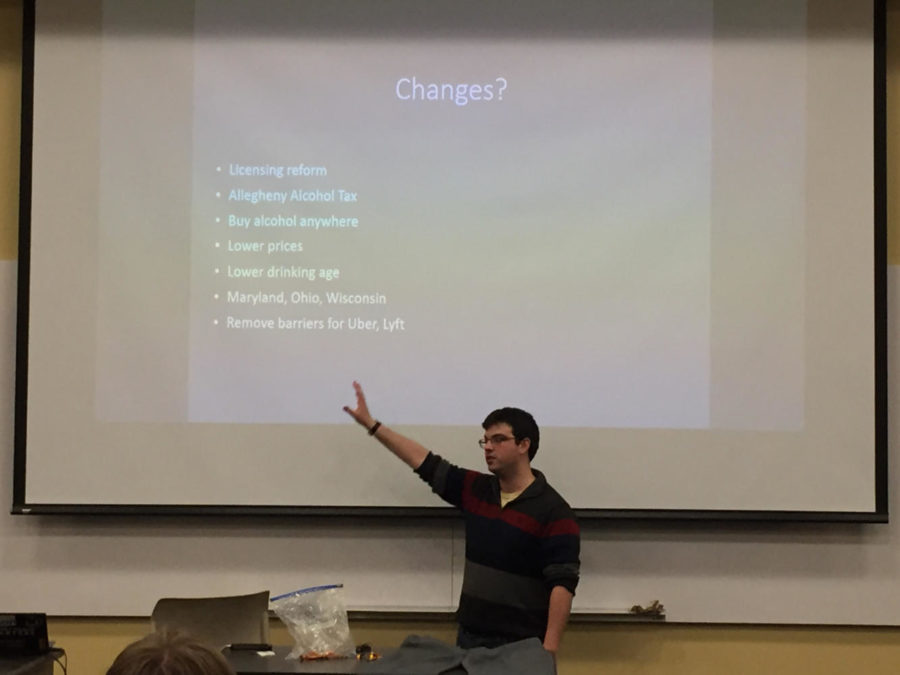 It’s St. Patrick’s Day, and you’re struggling to maneuver around the sticky, crowded dance floor in a stranger’s cramped basement. Someone bumps into you, causing you to almost spill the beer in your right hand. But you don’t care — these kinds of party scenes in college are common. And despite the immediate obstacles, you’re still having the time of your life.

Throwing these blowout St. Patrick’s Day parties isn’t easy. If you’re the host, buying the necessary alcohol under Pennsylvania’s current liquor laws remains a difficulty — and so does inviting college-age guests without getting busted by the police.

You may have had to endure hour-long wait times at the only liquor store near campus, the Fine Wine & Good Spirits on Atwood Street. As you finally make your way toward the exit, you breathe a sigh of relief — you feel like you just got out of jail.

If you’re a party attendee under 21, you risk paying hundreds of dollars in fines if the police catch you with a blood alcohol level more than 0.02.

But why is there such a lack of liquor purveyors near campus, and why must underage drinkers shell out their entire wallet for a victimless legal violation?

These are exactly the kinds of questions Pitt’s Students for Liberty raised at their club meeting in Lawrence Hall Wednesday night. To start the event, Ben Sheppard, president of the club, delivered a presentation describing Pennsylvania’s current liquor laws — many of them seemingly absurd.

In Pennsylvania, most hard liquors can’t be sold outside state-owned wine and spirit stores — something many of our neighboring states allow. Arcane regulations forbid grocery stores from selling customers more than 192 ounces of beer per transaction, forcing beer drinkers to go in and out and in the store again if they want to buy more than two six-packs at once.

What followed was a discussion with club members and other meeting attendees — mostly Libertarians and Republicans. But unlike in many political events on campus, there was noticeably little disagreement between attendees who typically hold differing views on social policy. All discussion participants came to an unanimous consensus — Pennsylvania’s liquor laws are outdated, impractical and a danger to those they aim to protect.

Despite the bureaucracy of current state law, Democratic Gov. Tom Wolf has made tremendous strides towards eradicating unnecessary regulation. Wolf signed Act 39 into law in 2016, which lowers prices on alcohol at state-owned stores, allows grocery stores to sell wine in limited quantities and restaurants to sell wine and six-packs to go. And with Act 166, Wolf allowed distributors to ship alcoholic beverages right to people’s doorsteps — another step in the right direction.

But while these changes represent some of the biggest changes since the state’s liquor laws were written in the 1930s, they’re still not nearly sufficient.

Current laws still aim to limit the average citizen’s access to alcohol. On the surface, this seems like the right solution to alcohol-related problems on college campuses, where binge-drinking rates remain at 40 percent and more than 1,800 students in the nation die every year from heavy consumption, according to the National Institute on Abuse and Alcoholism.

But the solution to binge-drinking culture on campuses is not to do away with alcohol altogether, but to inculcate a culture of controlled drinking. According to a classic 1967 study from Stanford University, students are actually more inclined to drink when immersed in a culture that encourages sobriety.

“Drinking in social situations governed by abstinence norms is often an expression of aggression against normative authority,” the study reads.

The reality is that students would actually benefit from ready access to alcohol to curb their rebellious, bingeing tendencies. But the government has set up our current laws to create the exact opposite situation.

Only Fine Wine & Good Spirits stores are legally allowed to sell spirits — and with only 600 of those stores in the country, it seems Oakland is actually lucky to have one.

Licensing regulations in Pennsylvania also put a hard cap on producers, restricting any wine distributor in the state from producing more than 200,000 gallons a year. For spirits distilleries, that number is a suffocating 100,000. And imports from out-of-state can only make up so much of the gap.

But it’s not just Pennsylvania-specific laws that are the problem. No matter how limited the supply of alcohol is, enforcing a drinking age of 21 nationwide only encourages teenagers to drink. Harsh penalties for underage consumption only make matters worse. Those under 21 are forced to drink in private if they want to drink at all, and if an accident occurs they’re far from help. Because they’re afraid of getting in trouble, they’re also scared to call the police. Lowering the drinking age would work wonders to prevent students from engaging in high-risk drinking activities and consequently reduce alcohol-related deaths.

Still, even if more lax liquor laws help lower alcohol-induced deaths and rates of binge drinking, the result of new legislation isn’t truly what matters. No one, regardless of political bent, wants an irresponsible binge-drinker to prevent them from having the legal ability to drink — especially if they’re drinking responsibly.

According to Ron Swanson, a government employee in the popular TV show, “Parks and Recreation,” American laws should exist solely to secure individual liberties — not to protect people from making rash decisions.

“The whole point of this country is if you want to eat garbage, balloon up to 600 pounds and die of a heart attack at 43, you are free to do so,” he says in an episode. “To me, that’s beautiful.”

It really is beautiful — and fair. Even though Swanson is a fictional character, his logic remains sound. Reckless individuals who abuse their freedoms should not prevent the general populace — mostly responsible people — from being afforded those freedoms. Likewise, binge-drinkers should not be the reason why the average law-abiding citizen, no matter their age, can’t have a beer without risking legal penalties.

So for the sake of freedom — and the convenience and safety of average citizens — please, Pennsylvania, fix your liquor laws.

Ben Sheppard was a columnist at The Pitt News.

Neena primarily writes about politics and local issues for The Pitt News. Write to Neena at [email protected].