Pitt men’s basketball future up in the air 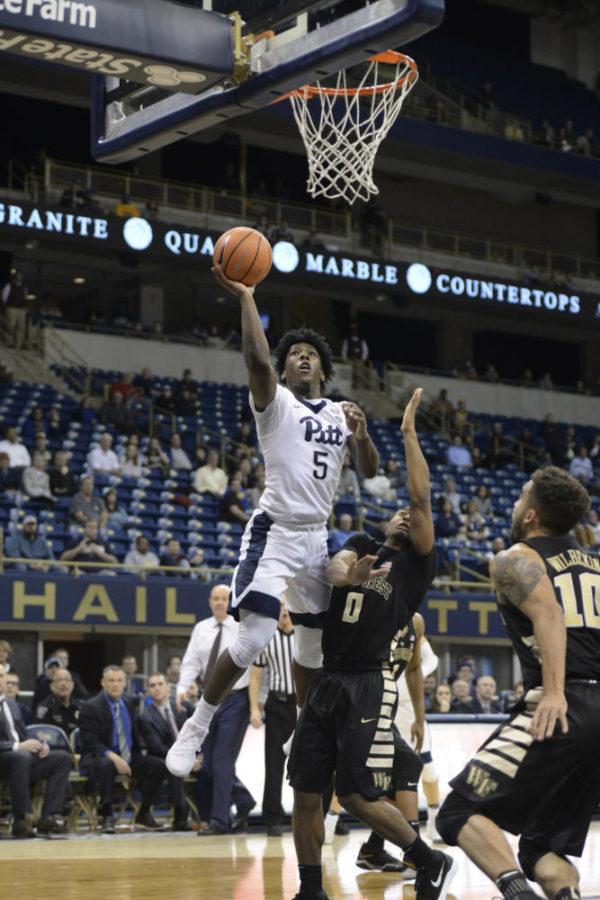 Marcus Carr (5), first-year point guard, is one of seven players to have requested their release after the firing of head coach Kevin Stallings and one of two players to have officially been granted his release. (Photo by Thomas Yang | Visual Editor)

The dominoes have started to fall after a tumultuous weekend for the Pitt men’s basketball team, which saw nine current players and two recruits request releases from the program.

First-year guard Marcus Carr became the second Pitt player to be granted his release from the program Monday night. He joins junior guard/forward Jared Wilson-Frame as the only two players so far to have been granted their releases.

Luther was the only returning player from the 2016-17 roster and the Panthers’ best player before going down for the year with a foot injury acquired in a game against West Virginia Dec. 9. Luther was leading the team in both scoring and rebounding before his injury.

If all of the players who requested releases eventually transfer, the Panthers would have just one player on the roster with any career starts — first-year center Peace Ilegomah with two.

The potentially departing players accounted for more than 95 percent of the minutes from last year’s team.

The nine players also make up over half of the Panthers 16-man roster. With redshirt senior guards Jonathan Milligan and Zach Smith and graduate guard Monty Boykins graduating, the Panthers will be left with just four players from last season’s roster heading into next season.

The Panthers have become used to this sort of turnover over the last two years. Last year, five players transferred, four more graduated and another was dismissed after Pitt finished the season 17-16, missing the NCAA tournament for just the third time in 15 years.

This year’s Pitt team missed the NCAA tournament as well, making it the first time Pitt has missed the tournament for consecutive years since 2001.

This season’s team will also eclipse last year’s team in roster overhaul, losing 12 players to last year’s 10. Only three major conference teams since 2000 have lost more than 10 players in a season before this year’s Pitt team.

Carr, Wilson-Frame and Stewart have all said that the team supported Stallings even if fans and the administration didn’t.

The Panthers now move forward into the offseason with no head coach, no committed recruits, potentially no returning starters and a lot of questions.