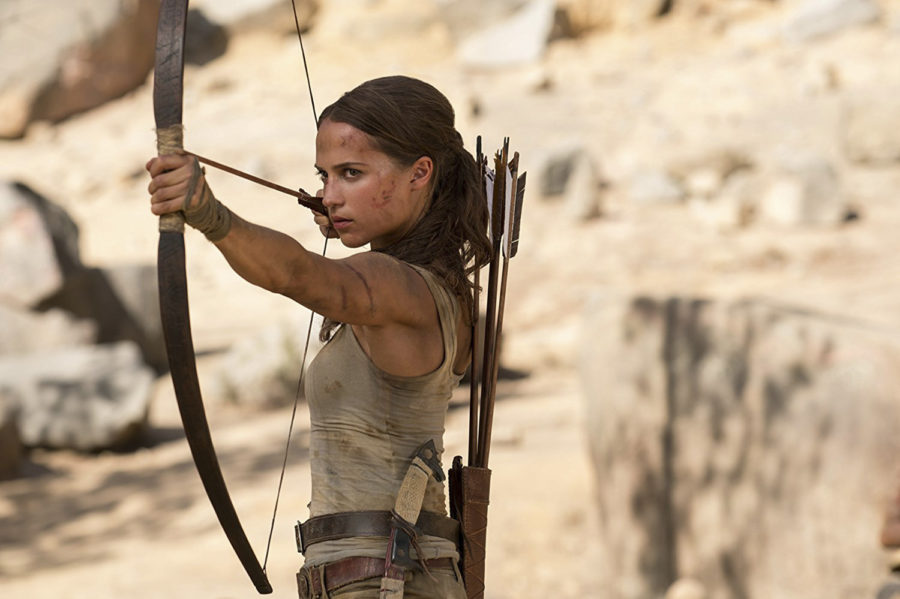 By Derek Wagner | For The Pitt News

While reboots and remakes made up the majority of films over the past decade, “Tomb Raider” lay dormant — a cautionary tale to studios of the dangers of adapting video games for the silver screen. Warner Bros. finally reopened the tomb of Lara Croft this year, hoping to find the magic that had eluded the Angelina Jolie-led failures.

Hints of what the franchise could potentially be are evident in the new “Tomb Raider,” starring Alicia Vikander as Lara Croft, but director Roar Uthaug and his production team approached the film in an uninspired, low-risk way. “Tomb Raider” has the makings to be an attention-demanding force at the box office, but failures behind the camera prevent the film from unleashing that power.

If there were any doubt that Vikander would be the right Lara Croft, she dispels it easily within the first few scenes of the film. Her joyful energy and resilience drives every scene she is in, buoying the lackluster script with an irresistible grit.

What makes her performance even more impressive is she does her own stunts, a taxing proposition given that “Tomb Raider” features enough literal cliff-hanging scenes to make an American Ninja Warrior blush. Having also starred in the sci-fi drama “Ex Machina” in 2014, Vikander demonstrates her diverse skill set, as she is just as convincing an action hero as she was an AI.

Vikander is in perfect position to turn Lara Croft into a career-defining role for herself. She has built a resumé strong enough to warrant studio commitment, yet she lacks the common name recognition that the top actresses in Hollywood do. For Vikander, success in the “Tomb Raider” franchise could elevate her into A-list status, much as “Hunger Games” has helped make Jennifer Lawrence one of America’s top-paid actresses.

But for all the commitments that Vikander has made to her studio, both in choosing to be the face of the franchise and in her excellent performance, the majority of “Tomb Raider” is spoiled by the laziness and lack of ambition of the production team.

Successful action movies demand good writing, impressive action sequences and effective marketing — “Tomb Raider” has none of these things. Despite blowing through a $94 million budget, the movie’s special effects are merely passable, and the film’s set design is reminiscent of one of the later “Indiana Jones” flicks.

“Tomb Raider” might as well be an uninspired “Indiana Jones” sequel. Lara’s father, played by Dominic West, is a wealthy aristocrat with a hidden hobby of seeking an ancient tomb — clearly not-too-loosely based on Indy himself.

While the treasure hunter genre is admittedly a hard one to reinvent, “Tomb Raider” adds virtually nothing to past works. There was not a single scene in the film that I hadn’t seen before. Booby-trapped rooms, secret puzzles to unlock doors and getting marooned on an island are all key points of intrigue in “Tomb Raider” — as well as nearly every other treasure hunt film made in the past forty years.

This isn’t to say that “Tomb Raider” wasn’t enjoyable — on the contrary, this film gives the audience exactly what it wants at every turn. Every thrill, no matter how cheap or outlandish, lands well, and every action sequence is fun to watch, even if most lack any true intrigue. “Tomb Raider” is a quintessential genre film — it sticks to its tropes and provides basic narrative to justify its gratuitous explosions and gun battles.

The tragedy of the film is the very fact that it fails to be anything more than a generic action blockbuster. Unlike the recent elevation of the superhero genre into comedy/action/sci-fi hybrids that dominate pop culture, “Tomb Raider” barely treads water with its Indiana Jones predecessors, making it entirely uncompetitive with the refined products of Marvel Studios or Fox’s “X-Men” series.

Recent box office evidence shows the franchise model of filmmaking is in jeopardy, as formerly secure franchises such as Transformers, Pirates of the Caribbean and Alien all flopped last summer. Knowing this, it seems unlikely that a mediocre adventure series will have any success at breaking into the market.

Yet there is still hope. The “Tomb Raider” franchise’s greatest asset at the moment is Alicia Vikander, who nearly single-handedly salvaged prospects for a sequel — no disrespect to Daniel Wu or Walton Goggins, who both performed well in underdeveloped supporting roles.

If Warner Bros. can find a more ambitious director and a creative writing team, we could very well see “Tomb Raider” become one of the strongest female-led franchises in the business.