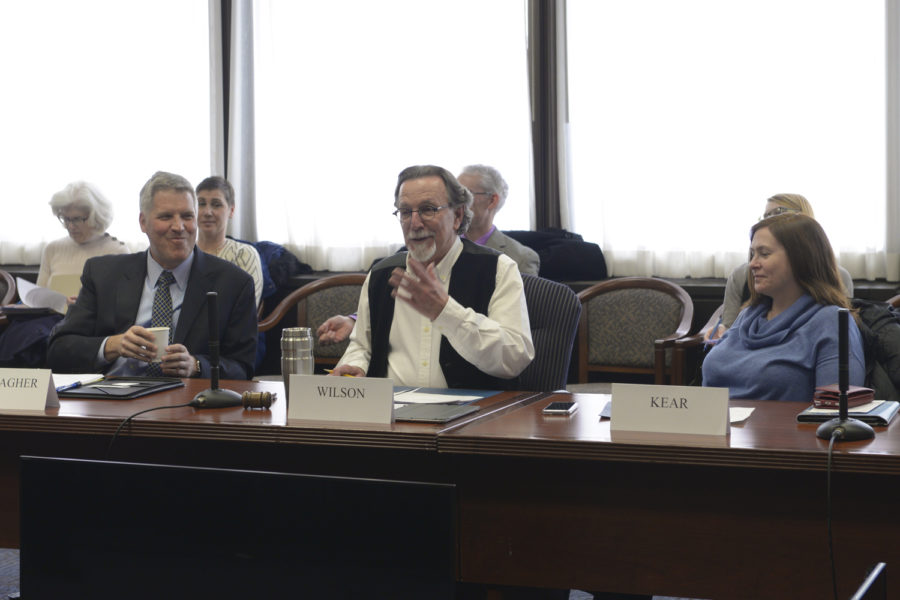 Chancellor Patrick Gallagher opened up his monthly report at Wednesday’s University Senate Council meeting by recognizing the two newly appointed deans of the engineering and law schools — whose hirings were announced in rapid succession over the past two days.

“I think we could all recognize [Martin] and his very engaging, strategic and partnership-oriented style that I think is going to be just a great fit for taking Pitt engineering to its next chapter of success,” Gallagher said.

Gallagher also recognized Amy Wildermuth, who was appointed dean of the School of Law Tuesday. Wildermuth is currently a professor of law at the University of Utah’s S.J. Quinney College of Law. She’ll take over as head of Pitt Law July 1.

“Amy is somebody who is dynamic,” Gallagher said. “[She] has a very clear vision for how we can really have an outstanding law department.”

Gallagher’s report then shifted to the future of the University’s Titusville campus. The Board of Trustees voted unanimously Feb. 23 in favor of converting Pitt Titusville into an educational and training hub. According to Gallagher, the hub will “provide a broader spectrum of … education and job training-type programs.”

“We are now moving quickly to try to implement that idea and form that hub,” Gallagher said.

After Gallagher concluded his report, Frank Wilson, president of the University Senate Council, began discussing next week’s Senate Plenary — an annual event focusing on a pressing topic pertinent to each academic year. According to Wilson, this year’s plenary will focus on open educational resources like PDF textbooks.

Pitt’s Student Government Board passed a resolution in mid-January calling for the University to adopt open educational resources — classroom materials published under open license. This would make textbooks and other classroom materials available for free or at little cost. SGB has been working alongside the Senate Council to achieve the resolution.

“The students, of course, have made sure that [open educational resources] became an issue for us,” Wilson said. “I think at this point, the forces are coming together and it makes a lot of sense.”

Concluding his report, Wilson said the goal of the plenary — scheduled to take place next Tuesday — is “something that we’ll be able to build upon.” The plenary will feature a panel of Pitt faculty, including Vice Provost Nathan Urban.

Before the meeting concluded, Andy Stephany, president of the staff council, discussed the results of Pitt extending paid parental leave to staff. Stephany said the amount of staff turnover has decreased by half since the proposal was passed six months ago.

“The cost savings are a couple hundred thousand dollars,” Stephany said. “So we’re already seeing a benefit in that area.”

Stephany also spoke about a different policy aimed at University faculty and staff that approves absences for volunteer service. The proposal, which seeks to establish paid time off for faculty and staff engaging in volunteer and community service initiatives, was unanimously approved at the general membership meeting Feb. 21.

“We look forward to working with our University partners to successfully advance this proposal,” Stephany said.