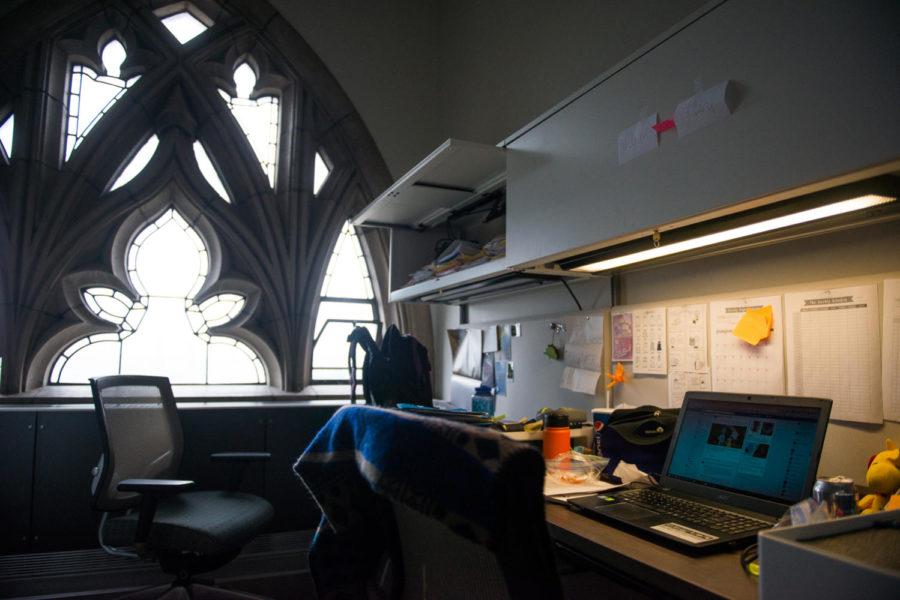 An office on the 14th floor of the Cathedral of Learning, where Pitt's Department of Communication is located. (Photo by John Hamilton / Managing Editor)

The dean of the Dietrich School of Arts and Sciences said Thursday that previous investigations and a recent survey of the department of communication have revealed an environment where women remain undervalued.

“The investigations revealed failures of systems and failures of character,” Dean Kathleen Blee said in a statement.

The University and the Title IX office will begin taking measures to address an environment where the “inappropriate acts of the few were tolerated by the silence of others.”

Blee described the University’s work over the past several months, reviewing both claims of sexual misconduct in the department from more than a decade ago as well as the department’s current climate. Issues in the department have been known for years — an external review in 2004 found that professors constantly engaged in consensual relationships with graduate students.

The department received renewed attention in December when Carol Stabile, a professor in the department from 1994-2005, wrote an article alleging a culture of harassment and a “‘nest’ of predators.” Pitt announced days after the article’s publication that the Title IX office would investigate the current culture in the department.

“After reviewing reports of the investigation, I am disappointed but determined,” Blee said. “Aspiration without action is not acceptable at this crucial juncture. We should do better, and we will do better, beginning immediately.”

Stabile called the statement powerful, and noted that it is the first time Pitt has acknowledged the “problems that have forced women and people of color to leave.”

“But the real work starts now—as they figure out how to change the culture in that department,” she said in an email Thursday.

Blee said those found through the investigations to have violated Title IX and University policies have received disciplinary sanctions. The University plans to monitor behavior in the department and “ensure that all recommended actions to improve the climate are implemented.”

It is unclear from the statement if members of the department have been sanctioned from recent investigations. Pitt spokesperson Deborah Todd did not clarify, saying the school can’t share details of the investigations in order to protect the privacy of people cooperating.

The current chair of the department, Lester Olson, did not answer a phone call Thursday evening or respond to an email with questions about the department’s current culture.

Blee added that she will be working with the Department of Communication and the Title IX Office to institute mandatory inclusivity and Title IX training for all faculty, staff, and graduate students in the department. The school with also rebuild the department’s decision-making committee and bring in an outside person to strengthen mentorships in the department, especially for women and minorities.

“As I continue to work with the Title IX Office and the department in the years ahead, we may find other ways to fashion a climate of inclusion and engagement,” Blee said. “But, we will not rest until the situation is changed.”