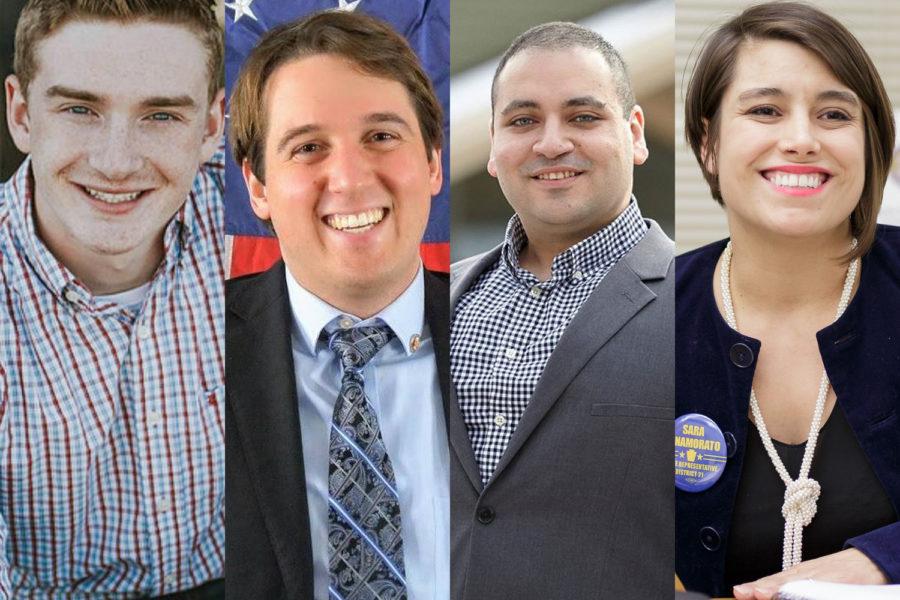 (From left) Josh Nulph, Jacob Pavlecic, Kareem Kandil and Sara Innamorato are all current or former Pitt students running for the state House. (Images via Facebook)

Jacob Pavlecic and his best friend Quin McLaughlin’s conversations were usually about local sports. But after the 2016 election, McLaughlin — now a student at Slippery Rock University —  surprised Pavlecic by switching their conversations to politics. He thought Pavlecic could run for office.

“He said that if [Donald Trump] could do it, why not us?” Pavlecic said. “I don’t know if he was being serious at the time, but it stuck with me.”

Pavlecic, a 20-year-old Pitt junior studying politics and philosophy, is now knocking on doors and making countless phone calls in his campaign to win the 30th District seat in Pennsylvania’s House of Representatives.

Several other Pitt students, past and present, are likewise campaigning for a spot in Harrisburg. Besides Pavlecic — who is running as a moderate Democrat — there is Josh Nulph, a 20-year-old former Pitt student hoping to encourage Republican voters for the seat in Pennsylvania’s 33rd District. Pitt alum Sara Innamorato — a Democratic Socialist — is running for the Democratic nomination in the 21st District, and Kareem Kandil, another Pitt alum and Democratic Socialist, is running on the Democratic nomination in the 30th District against  Pavlecic.

Josh Nulph said he became the “Ron Swanson” of his township at 18 years old after he was elected treasurer, and then chairman, of the Recreation Board of Harrison Township.

Nulph, now a 20-year-old former Pitt student, also spent time working for the Pennsylvania GOP in the 2016 election cycle while attending school. He said these experiences influenced him to run for political office. Nulph left Pitt when he was a sophomore to launch his political campaign for Pennsylvania’s 33rd District seat on the Republican ticket.

He now juggles campaign work with working toward a finance degree at the online Liberty University. His platform includes listening to the needs of the community and working for a more efficient budget spending plan to afford lowering property taxes.

“In my district … we have some of the highest property taxes in the state,” he said. “That’s one of my biggest issues, because in my area there are many affluent families and there are many people who unfortunately are struggling to put food on the table.”

Nulph said he also hopes to address the opioid epidemic in the state by focusing on the experiences of first responders.

“The first step to tackling the opioid epidemic is talking with first responders because they are on the ground level,” he said. “I am not a first responder, so I have a great respect [for them]. I want to make sure they have the tools they need to do their job.”

Nulph believes in his team and his drive to win the election. His said his leadership method involves knowing the people in his district and having a strong system to support him.

“I want to be out meeting as many people as I can, because if you want to be an effective leader, you have to know who you’re leading,” he said.

Sara Innamorato never imagined she would run for office, despite having co-founded She Runs SWPA, an initiative that encourages women to run for office in the region.

“I was looking at the things that I really care about,” she said. “I was going to ask women to run and many said ‘why don’t you run?’”

Innamorato is currently vying for the 21st District seat, running as a Democratic Socialist in the Democratic primary. Her platform has been influenced by the death of her father, who passed away when she was a teenager due to an opioid overdose. She said a main priority of hers is to increase funding for people who are impacted by the opioid epidemic, including families impacted by a loved one’s addiction.

“There’s a lot of families that are collateral damage for [the opioid epidemic],” she said. “We talk about funding for treatment — how do we expand funding to the people who are impacted by a loved one being addicted?”

Innamorato, a former Pitt business student who graduated in 2008, views the current American political environment as rife for corruption, with too many family names holding multiple offices and using money to buy power.

“I don’t believe any politicians should take any money that furthers corporate interest,” she said. “But it’s really hard not to take that if you have this progressive idea to move forward.”

Innamorato thought she would have to defend her qualifications for why she’s eligible for the seat, she said. But she said she has found through her campaign work that people care more about her dependability and less about her resumé.

“I think people just want to know you’re authentic,” she said. “It is more about my experience and my plan for Pennsylvanians.”

Pavlecic, who is set to graduate at the end of the semester, attends an administration for public affairs class Tuesday night when he’s not out gathering signatures to get on the ballot.

“The biggest thing with politics is no one can be an expert in everything,” he said. “You need to know what you don’t know, do your research on that to make an informed opinion. And I think students, that’s what we do, and I plan to work hard to try and do that.”

The moderate Democratic candidate has top priorities that he plans to focus on if he gets elected, including balancing the state budget and creating a severance tax in order to provide more money for education, he said.

“When the state mandates what schools have to use money for, it just doesn’t work, and the districts are best equipped to answer what they need the money for,” he said. “Increase basic education subsidies to let school districts make their own choices.”

Pavlecic said his student perspective allows him to better represent people because he is used to focusing on research and providing evidence-based solutions to problems like per diem regulations for politicians.

“I think so many people are fed up because they think the government doesn’t even listen to them,” he said. “Give me a chance to let me show that I’ve done my homework. I’m committed.”

Also running in the 30th District is Kareem Kandil. A Democratic Socialist and former Pitt bioengineering student, he has done work in the health care, research and data science fields in the past, influencing him to focus on environmental and health concerns. He said he is against fracking because of the effect it has on people’s lungs.

“Even the staunchest Republicans don’t want fracking right by their schools, their kids,” he said. “It’s unfortunate that no one seems to be willing to give an alternative message to that.”

Kandil, who graduated from Pitt in 2013, also intends to focus on mental health if elected. There are areas in Pennsylvania where not a single medical facility that caters to mental health can be found for miles, according to Kandil.

“We need more workers and [we need to] encourage more people to go into mental health,” he said. “[Mental health] doesn’t get the focus it deserves.”

Although Kandil agrees with his opponents on severance taxes and the importance of health care, he does not believe they currently have a well-constructed platform.

“I haven’t seen, to my dismay, any comprehensive health care plan or solution,” he said. “I wait to hear their solution.”