You may have seen Ian Troost without even knowing it. It's possible he was a passing thought or a source of lingering ire. It all depends on your opinion of mustaches, mascots and kneeling during the national anthem.

He was the tall skinny guy with the little brown caterpillar named Jerry perched on his upper lip. Jerry has since perished due to a Super Bowl bet.

During the 2016-2017 school year, the senior marketing major was Roc, jumping around in the Oakland Zoo or Panther Pitt. Before that, in Utah, he was Griff the Griffin.

And last fall you may have seen him suited up in a Pitt jersey and kneeling during the national anthem. 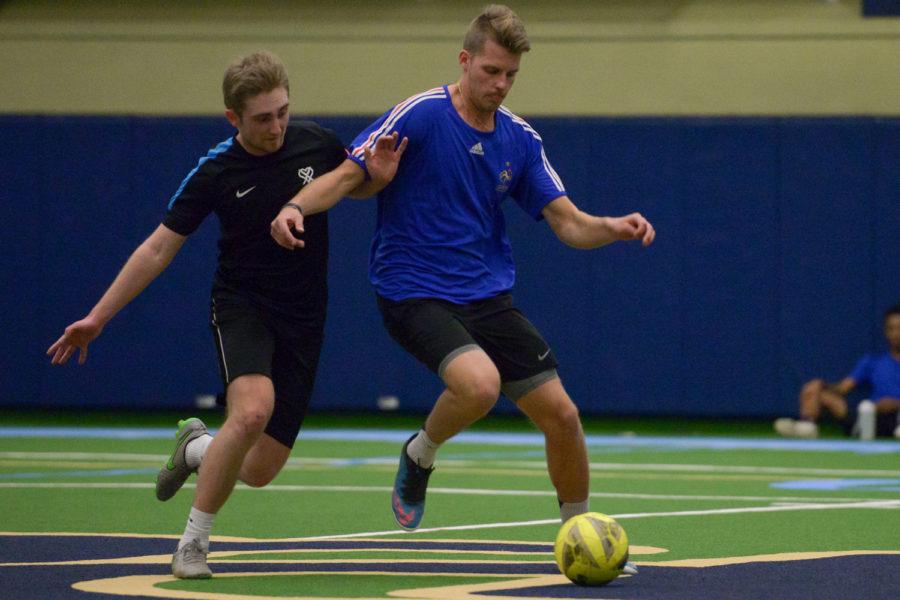 Though his recent life is anything but normal, his grew up in standard small-town America.

“Honestly, I don’t think I could have had a better childhood,” Troost said. “I got very lucky growing up.”

Troost is well acquainted with the idyllic beaches and lush green scenery of Portsmouth, New Hampshire. Basking in the summer sun and wrapped in hometown comfort, Troost knew Portsmouth had its problems. He just didn’t — or couldn’t — grasp the larger context.

“You kind of get set in your community’s ways and thinking,” Troost said. “You see the problems your community has, which are all very valid problems and legitimate problems, but you may not see problems on a larger scale.”

In high school, he was the captain of the soccer team, and he was even kicker on the football team for a few games his senior year. When the two sports overlapped, soccer always took precedence — he wasn’t entirely sold on football just yet.

“I really wanted to play soccer in college, and that gave me the best opportunity to do so while still being able to do other things,” he said.

He decided that Westminster College in Utah was the best place for him to continue his passions. He wanted to ski Utah’s slopes and hike its mountains, explore the metropolitan downtown of Salt Lake City and meet a wider variety of people. 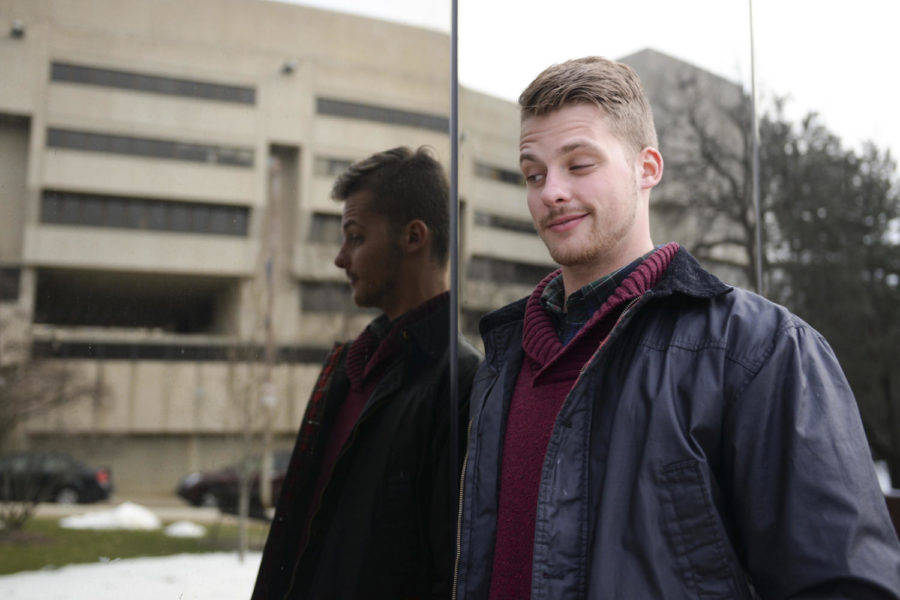 He did all of that, but he also opened his perspective to a wider spectrum of social problems — institutionalized ones he’d only heard of and couldn’t comprehend the depth of — including  immigration and gender bias.

“I’m sitting there like a naive kid, and I’m like, ‘Well, I’ve never heard of these problems before,’ so like — not that I was delegitimizing them — you just don’t understand how serious or how in-depth they go,” Troost said.

As a first-year student, he kept it low-key, playing soccer and meeting new friends like Matt Warne.

“He’s very reliable. He lives in Pittsburgh now, but he still is a best friend to me,” Warne said.

Troost decided in his sophomore year he wanted to get involved in the community around him. This is when Troost had what he calls an “aha” moment. He was elected student body president of clubs at the Associated Students of Westminster, a group that oversees the operations of over 50 clubs on campus.

While running an organization, playing soccer and growing as a person in Utah, he also met his true love — mascoting. 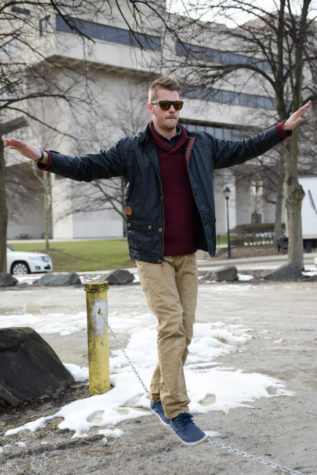 “I was like, ‘Why not?’ and I ended up falling in love with it and realizing how much of a subculture it is — meeting other mascots, pro mascots and stuff like that,” he said.

Then, he had an idea. He wanted to kick again, and he was also a good mascot. What if he could combine the two? He sent out tapes of himself kicking to schools like Carnegie Mellon and Pitt — but most weren’t interested. He then emailed cheerleading coaches about becoming the new mascot. His plan was to build a connection with members of athletic departments and parlay the connections into a spot on the football team.

“And I wanted to be the mascot anyway — if football didn’t work out, that was,” Troost said. “I love mascoting more than anything. Actually, it worked out really, really well.”

Troost moved to Pittsburgh and cemented his place among a rotating crew of Rocs, just waiting for his shot at the football team. Among his top mascot moments was being at Clemson in 2016, when Pitt scored the upset.

“Being Roc was one of the most unbelievable experiences,” he said.

After his time as Roc, he decided to try for a walk-on spot on the Pitt football team. Troost made the team in the spring of 2017, but wasn’t sure if he would remain on the team after that season. But when he came back after the summer to prepare for the 2017 season, he saw his nameplate on a locker.

Though Troost went to every practice, he didn’t play a single minute of the season. But that was okay with him — while he wanted to play, he was happy with helping the team in any way. He enjoyed his time with the team, but missed having the time to spend with friends and realized he wasn’t quite happy with football anymore. After going back and forth, he decided he was leaving the team in November.

His interests aren’t limited to the athletic realm, though. He’s written a couple sketches for University of Pittsburgh Television and plays the ukulele — poorly — but it’s cooking that really excites him.

“They’re not necessarily traditional enchiladas, but my chicken enchiladas are pretty freakin’ good,” Troost said. “Or I make a really, really good pasta dish that has a bacon-chicken-onion cream sauce, which is actually probably my best dish.” 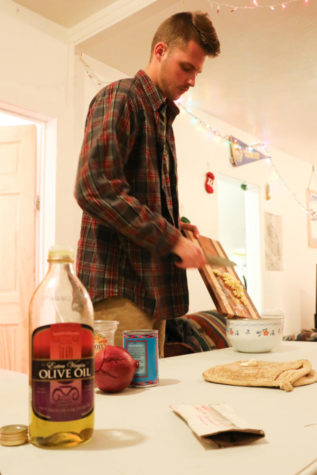 Cooking gives him free reign to try obscure combinations — and to flex his proverbial creative muscles.

But he can also quickly switch conversation topics from his favorite dish to his most influential activist.

His adviser at Utah, Oliver Anderson, opened his eyes to race and identity issues. Anderson challenged him on his biases, sometimes at Troost’s behest. Troost didn’t always see why a person's preferred identity was such an issue, and Anderson would catch him and explain it.

“He did such a good job explaining things to me, helping me break out of this role of heteronormativity. I really owe a lot to him for that,” he said, his tone almost reverential.

Anderson recalled Troost’s interest openness to learn and his quest to learn “all sides of a topic.”

“Ian has always been a grower,” he said. “As soon as he learned something new or overcame a challenge, he set his goals onto the next big thing.”

Troost admitted that when he was a senior in high school, he likely would have disagreed with Colin Kaepernick’s decision to kneel during the anthem, coming from a family with military backgrounds. So when Troost knelt during the national anthem in protest of police brutality in October, he tried to make his stance explicitly clear.

He didn’t care what strangers on the internet thought but worried friends and family would think his actions on Heinz Field were an attention grab. But it wasn’t — it was an attempt to build a conversation, to add another voice, however small, to the chorus.

“It definitely stressed me out a little bit. I would find myself not thinking about school or not focusing on school, but doing more research or responding to people — not necessarily negative comments, just having conversations with people — which is really important,” Troost said.

Occasionally, someone will read the Pittsburgh Post-Gazette’s article on Troost kneeling and send some hate his way on Twitter, but that doesn’t bother him much. Only his close friends’ opinions matter to him, and only if they’re willing to hear him out — because he’s more than willing to hear them out.

“My biggest thing is, I don’t really care what other people think about me,” Troost said. “If you want to have your opinion, you have your opinion — it’s that simple. Because I clearly have mine.”