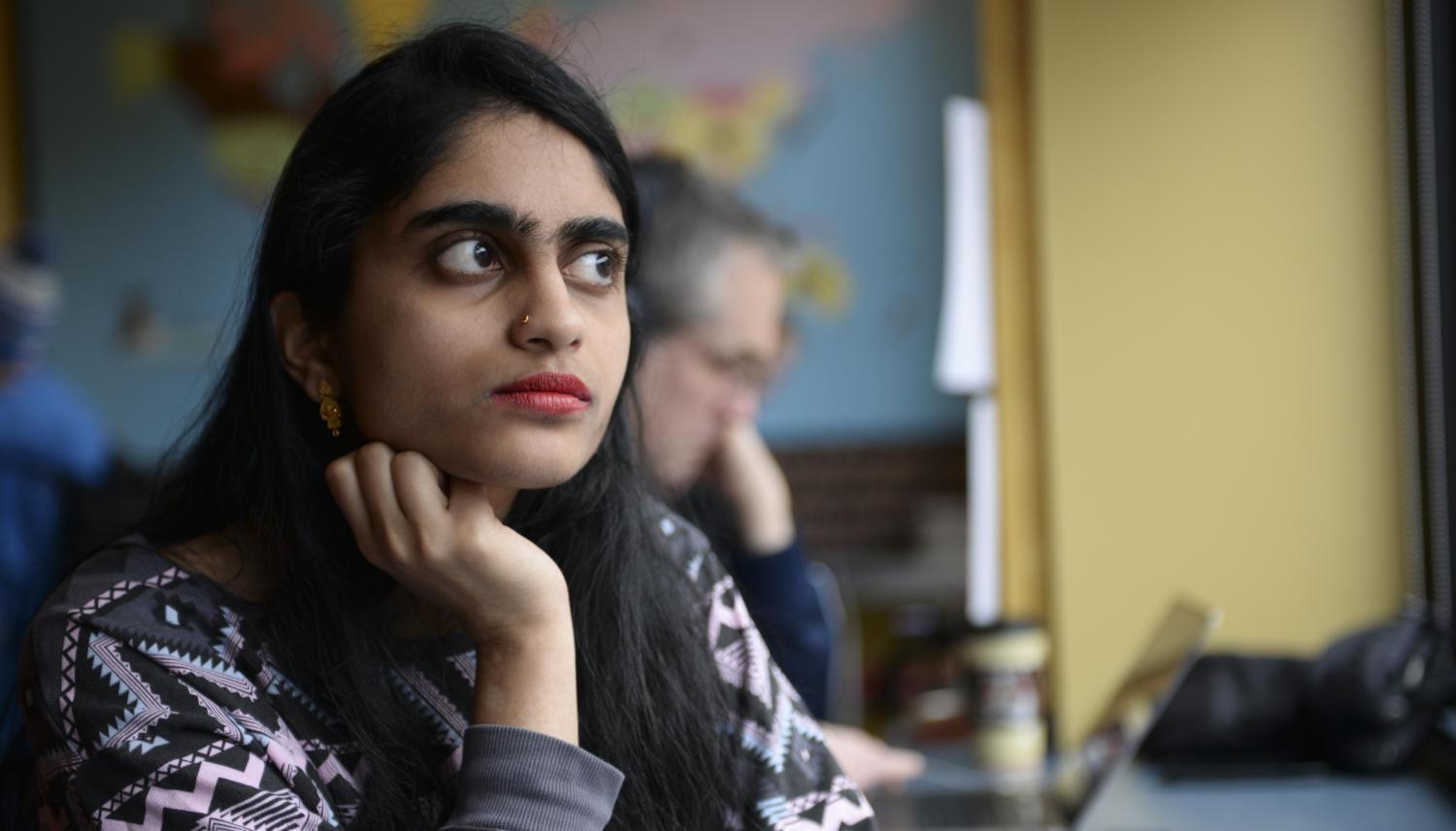 Krithika Pennathur has a story to tell, but it’s not about her.

Pennathur, a Pitt junior, may spend her days speaking at events or leading advocacy workshops in clubs on campus — but over coffee you’ll have her undivided attention and the feeling that she has all the time in the world.

“You can just write at the top of my profile, ‘Krithika just likes to listen,”’ she said. “‘That’s all she likes to do.’”

From a young age, Pennathur could tell she wasn’t like the kids she grew up with. Whether taking ballet, jazz and tap classes at South Side Dance or sitting with her nose in a book at Winchester Thurston School, Pennathur had a vague but sure feeling of unbelonging — and a feeling that she wasn’t the only one who felt that way.

She developed a love for books, though hardly any of them were written by or about women who looked like her — a petite Indian girl with a wild mane of dark hair flowing down to her waist.

“I was very much attuned to other cultures not being represented and other sexualities not represented in literature,” Pennathur said. “Or they’re misrepresented.”

But in college at Pitt — where she’s majoring in gender, sexuality and women’s studies, along with English writing and history — Pennathur decided to make her voice heard. With the birth of her club, Pitt Unmuted, she’s created a space for her voice — and a lot of other ones, too.

Pennathur set Unmuted in motion with a Facebook post last summer to gauge Pitt students’ interest in the club. The focus would be wide — sexual assault, relationship abuse, issues in the judicial system and other current events — and the club would allow for discussion and education on these topics as well as offer an online platform for both male and female assault survivors to share their stories.

Pennathur, who has a “personal connection to the cause,” said the support she received for the idea overwhelmed her.

“That huge response [on Facebook] showed that people needed this,” she said.

The club has held regular meetings since the beginning of the 2017-18 school year with the support of Unmuted’s faculty adviser, Laura Stamm, but only became officially Pitt affiliated in January. 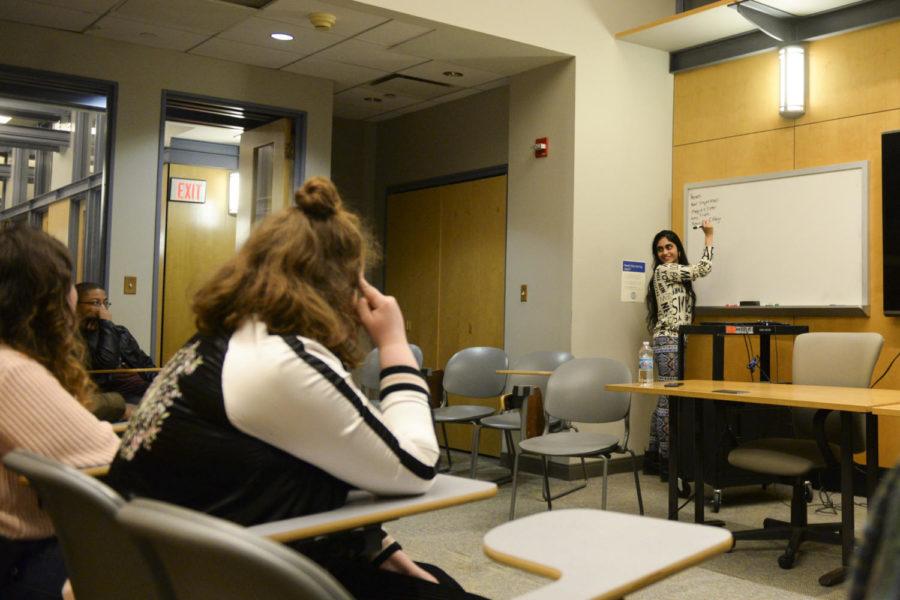 Jacqueline Souza, Pennathur’s good friend and Unmuted’s vice president, said members are thankful for the club because they don’t see the University providing the kind of support for assault victims that they need.

Pennathur agrees, citing the death of Pitt junior Alina Sheykhet in October as one case in which Pitt neglected to directly address the incident and issues like intimate partner violence.

“It was a really big blow to students,” she said. “Upsetting is an understatement.”

This is the kind of silence Pennathur and the members of Unmuted combat every time they meet, validating those who haven’t felt they could voice their experiences and uplifting those who feel isolated.

“It’s so hard,” she said, “because survivors don’t owe you their stories, but they deserve a place where, if they want to share their story, they should be able to.”

The club isn’t only for survivors, though. Pitt senior English and economics major Matthew Walker, who has three friends who have experienced assault and partner violence, attends the club as a way to support them.

Pennathur aims to make each meeting as interactive as possible, engaging members to brainstorm ways they can uplift women and other marginalized groups. She calls on club members by name with a warm familiarity as she writes their input on a whiteboard.

Though Pennathur founded the club and is its president, she prefers to stay in the background.

“It’s really led by the people who are in the club, the people that continue to share their stories,” she said. “I don’t impose a certain vision for the club except for it to serve as an intersectional platform.”

Pennathur hesitates to bring any kind of focus herself. For the first time in an hour-long conversation, she is short for words when asked to talk about a time she’d uplifted someone else. 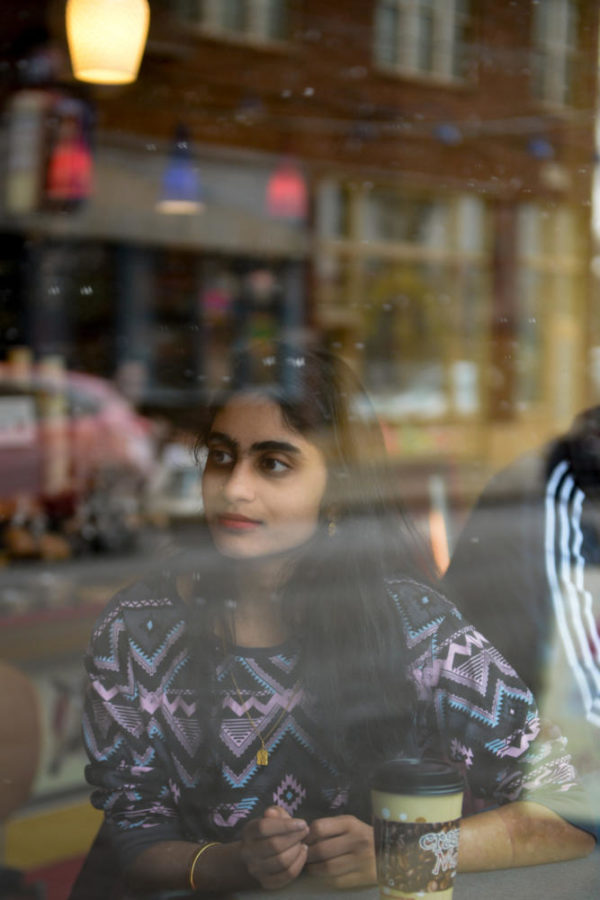 “This is difficult for me,” she said, “because as you probably notice, I’m not the kind to want to talk about myself.”

Though Pennathur would rather listen to others than share about her own experiences, her friends can confirm what anyone would guess from meeting her — she speaks to inspire.

“We became friends on Facebook before real life, and she’d always like every single comment and post I made on Facebook,” Khusbu Patel, a Pitt sophomore and neuroscience and psychology major, said. Patel describes Pennathur as one of her best friends. “She’s very supportive ... definitely my number one hype woman.”

“I could write an essay on her,” Souza said. “I’m constantly amazed at how tireless she is. She spreads herself so thin, but you don’t see the negatives that come along with that.”

Souza isn’t the only one to notice how involved Pennathur is. In addition to serving as Unmuted’s president, she is the volunteer coordinator for Pitt Girl Up, an international women’s rights advocacy group, serves on the board for Pitt Color TV, a startup organization at Pitt which serves as a platform for people of color, and is involved with Pitt’s South Asian Student Association. Pennathur is also a part of the sexual assault prevention month task force.

It’s a heavy workload, one Pennathur said her parents were initially worried about her taking on.

“My dad thinks [my work with Unmuted] is I’m like doing the job of three people,” she said. Her mother, Revathi Pennathur, said that though she was concerned about her daughter’s workload, she always encourages her to take a few hours to rest.

“That’s my big thing with her,” Revathi said.

So, what does a woman with three majors, two minors, a certificate and countless extracurricular involvements do to relax?

But don’t ask Pennathur for a favorite sweets shop recommendation — she’ll direct you to her own kitchen, saying her mother’s recipes are some of her favorites.

Pennathur’s relationship with her family, which resides in Pittsburgh but hails from South India, has had a strong influence in shaping her into who she is today — whether she’s standing in the kitchen making Indian desserts like gulab jamun or saying her morning prayers.

Pennathur is Hindu — a faith that, between passed-down necklaces and long Sundays spent at the temple, weaves itself deeply with her identity.

“My grandma gave me this when I graduated high school,” Pennathur said as she pulled back her sleeve to reveal a golden, intricately designed bangle.

Both of Pennathur’s grandmothers — “pathi” in her native language Tamil — live in India. She sees them only about once a year because of the travel distance.

“I always felt sad … because I could never go to ‘Grandma’s house.’ But this kept me grounded,” she said of the jewelry, “like, they’re with me.”

Pennathur’s passion for activism didn’t take root until high school, but the adversity she faced since starting school for her race and religion contributed to her devotion to intersectionality in her advocacy. 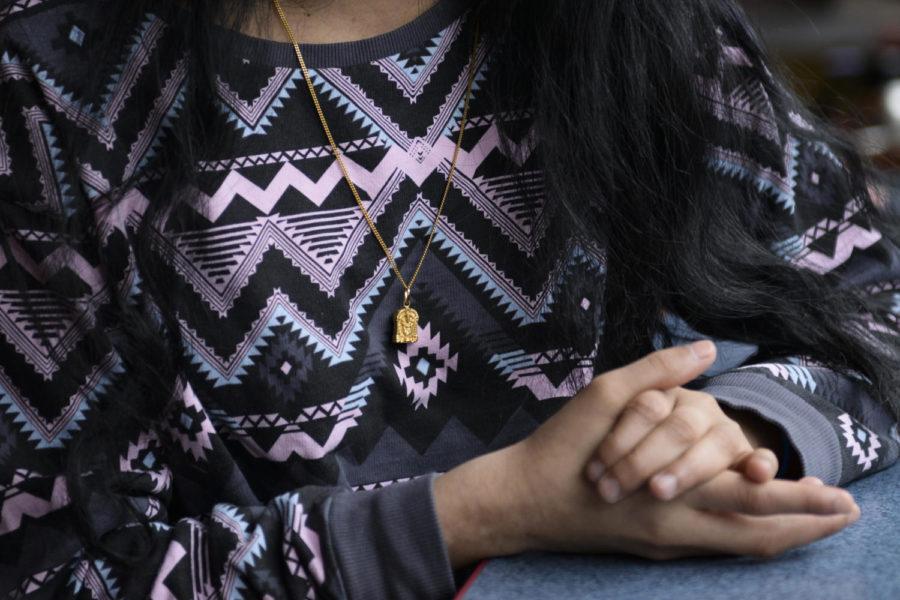 Pennathur’s advocacy and leadership of Pitt Unmuted may have been college creations, but intersectionality and diversity run deep wherever she’s involved.

And as for her role models? There are no shortage of those, either.

“The women in my family are my earliest heroes. Their strength — I’m a first-generation American,” she said. “A lot of people on this campus inspire me, and some of them don’t necessarily know it.”

But as much as Pennathur does to uplift and give voice to students, some still feel isolated and shamed by their stories.

“My heroes,” she said, “I haven’t met them all yet, because their stories aren’t being told.”