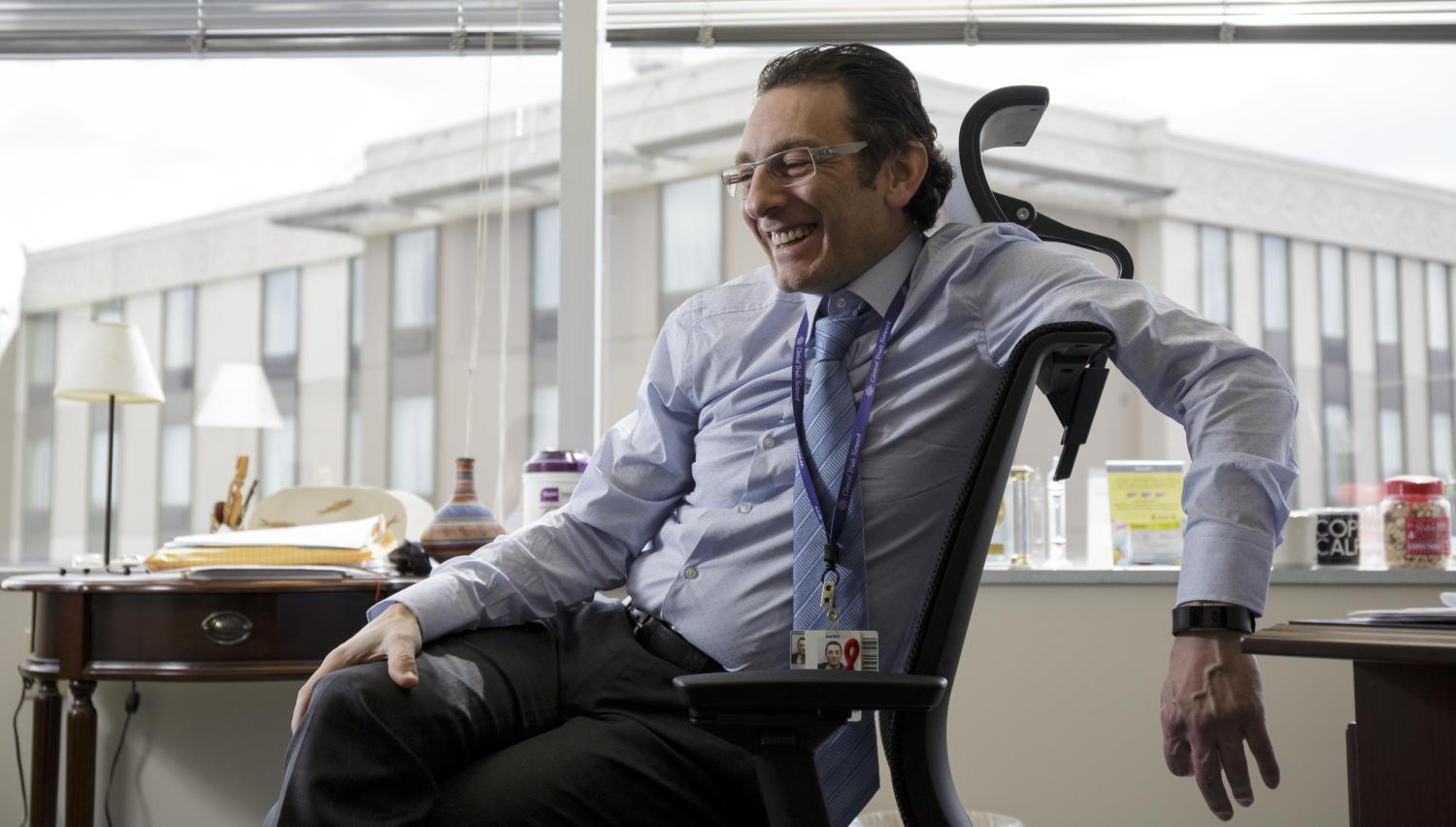 Dr. Antoine Douaihy didn’t think he would end up working as an addiction psychiatrist when he was growing up in Lebanon and France. He wanted to be a classical ballet dancer.

Douaihy discovered his passion for dancing when he was 9 years old — and he thought he would pursue it as a career throughout much of his childhood.

His passions have motivated him since he was a young ballet dancer in France — during his time at a local dance studio in Syracuse, New York, when he came to America and still to this day. He’s maintained his slight, athletic build from his dancing days. He sees a connection between his time as a dancer and his current professional life.

“To me, dancing was a way to express myself … to be more in touch with who I am,” Douaihy said. “This is where the similarity is probably the common denominator.”

In both dancing and medicine, Douaihy values the connections that he can make with people, whether they’re colleagues, patients or audience members.

“It’s very much similar when it comes to being in this place when I’m connecting with patients,” he said. “So in a sense, when you’re really dancing, you’re on the stage, you’re connecting with people. You’re affecting people on some level.”

Douaihy’s original plan was to work with patients with mood disorders. It wasn’t until one of his mentors, Dr. Eugene Tinelli, suggested he take a job at a veteran’s hospital that he became interested in the field of addiction.

Tinelli suggested Douaihy do a rotation on the addiction floor of the VA hospital in his first year to explore his options. Wary of working with addiction patients, Douaihy cautiously took the chance.

It was there that Douaihy discovered motivational interviewing after Tinelli gave him a book on the topic.

Motivational interviewing is a therapeutic technique that helps patients find internal motivation to change their behaviors. Douaihy uses this in place of confrontational approaches like interventions.

“Motivational interviewing has been the foundation of my career,” Douaihy said. “It has become like a way of living, because I believe in what I’m doing and how I’m doing it.”

Douaihy’s interest in motivational interviewing led him to eventually co-edit a similar book on the technique, designed for medical trainees, in 2014.

Douaihy found this more empathetic approach useful in working with patients struggling with addiction. He values the trust that his patients have in him, so he was reluctant to share specific stories.

“These are people who struggled, who tried very hard to change their lives and are stuck in a vicious cycle,” Douaihy said.

He said it was those patients who really solidified his interest in the field of addiction psychology.

“I got hooked on that kind of work,” Douaihy said with a laugh, acknowledging the irony.

After finishing his term at Syracuse in 1996, Douaihy did addiction work out of a private practice that he set up in Ogdensburg, New York, for a few years. But it wasn’t long before he wanted something more.

Inspired by his mentors at Syracuse, he wanted to find work in academia, initially planning on heading to the West Coast. But when things didn’t work out after an interview for a job in San Francisco, Douaihy found himself in Pittsburgh.

“I ended up interviewing here, in a way, by default,” Douaihy said. “I never thought I was going to end up in Pittsburgh for 18 years.”

Since arriving on campus in 2000, his passions are divided between clinical research and training and mentoring medical students. One of his former mentees, Alexandra Sansosti, a third-year medical student, worked with Douaihy last July and August.

Even though Sansosti plans to make a career in general surgery — not addiction psychiatry like Douaihy — she found Douaihy to be a valuable teacher and guide.

“He is the most loyal, dedicated mentor that I have ever encountered. I am talking in my entire educational career,” Sansosti said.

She remembered one patient in particular from her rotation last summer who had been admitted to rehab several times in the last few years. Douaihy stuck with her when others were ready to give up. Another physician told Sansosti that they didn’t know if the patient could be helped since she was so self-destructive.

“[Douaihy] had said to me, ‘Alexandra, this is the population that we work with. This is not out of the ordinary. And if you give up on these people, they’ll never trust the medical system. And they’ll never come back. And that’s when you lose people. That’s when drug addiction becomes deadly,’” Sansosti said.

Douaihy was able to keep the patient on the floor until she was ready to enter inpatient rehab, an experience Sansosti described as “eye-opening.”

Cecilia Fichter-DeSando, the prevention manager for addiction medicine services at UPMC, says Douaihy is similarly compassionate and encouraging with his colleagues.

Fichter-DeSando and Douaihy were part of a team looking to help pass the Pennsylvania Clean Indoor Air Act — a law that prohibits smoking in a public place or workplace — in 2008. She said Douaihy was vital to getting the law passed and helped keep her encouraged throughout.

“I just said, ‘When is this going to happen?’ and he said, ‘Cele, this is a culture change, and culture change happens slowly — and we’re going to do this if we keep working at it together,’” Fichter-DeSando said.

According to Fichter-DeSando, he researched and sent articles to other professionals in the field for months explaining the benefit of smoke-free public places. The research he found showed that people recovered from illness and addiction quicker if there were smoke-free spaces available to them.

“He’s not autocratic,” Fichter-DeSando said. “Even though he firmly believes what would be best, he wants you to come to your own decision.”

Douaihy’s line of work has come to the forefront of both local and national conversations as western Pennsylvania and the United States as a whole have found themselves enwrapped in an opioid addiction crisis.

In Pennsylvania, 38 out of every 100,000 deaths during 2016 was due to overdose — the fourth highest total in the nation, according to a report from the Centers for Disease Control and Prevention. Douaihy has seen the effects of the opioid epidemic firsthand in his clinical work.

He wants the public to look at the victims of the crisis in the same way that he looks at his patients and students.

“It’s about human beings that are suffering,” he said. “All this work revolves around empathy.”