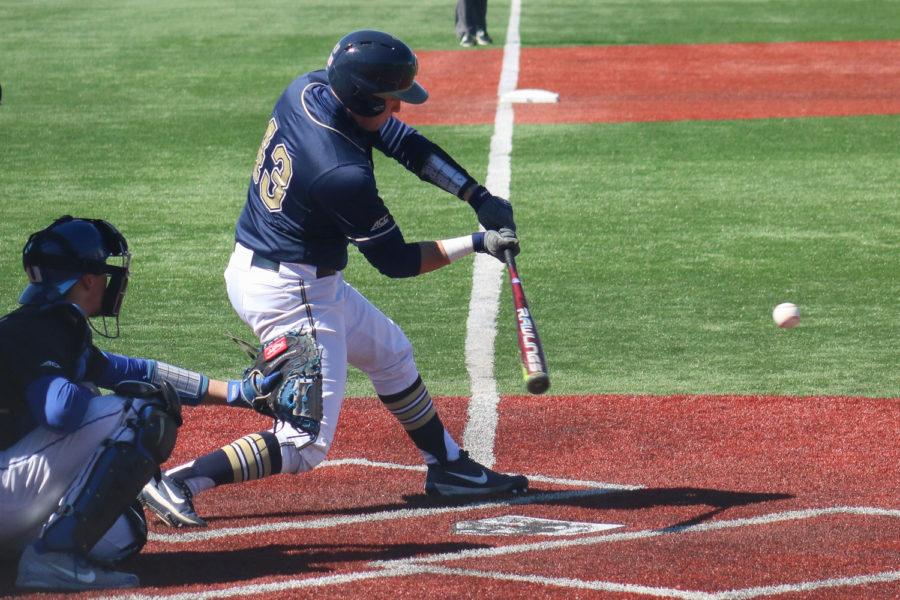 Basketball season may be officially over for Pitt, but it was still a packed weekend for athletics, as four teams took the stage with varied results.

Gymnastics saw strong individual performances once again and softball swept their series. Baseball had a mixed bag against a ranked Duke, and tennis continued their ACC struggles.

First-year gymnast Haley Brechwald was named the EAGL Rookie of the Year at the 2018 EAGL Championships Saturday at Towson University.

The team finished fifth in the meet with an overall score of 195.475. On bars, the team scored a 49.275, tying their program record set earlier this year against New Hampshire. The floor squad scored a season high at 49.275, which falls in the top 10 scores on floor in program history.

Brechwald reached the podium on floor, placing second with a season-high score of 9.925. She also finished third in the all-around with a 39.325. Junior Lucy Brett earned a second-place finish with a career-high 9.925 on bars, which tied for the second-highest bars score in program history.

The Panthers will find out if they qualified for regionals during the NCAA gymnastics selection show Monday at 4 p.m. The NCAA Regional Championship will take place Saturday, April 7.

Pitt’s pitching led the softball team to perfection during their double-header against Virginia Tech Friday evening at Tech Softball Park. The Panthers took game one 4-1, and then followed that up with a shutout, 4-0 in game two, pushing their record to 17-11-1, and 6-2 in the ACC.

Junior Sarah Dawson (9-7) got the start in the first game, allowing one unearned run in seven innings, striking out two and walking one. Junior Olivia Gray and senior McKayla Taylor were the big producers at the plate for the Panthers in game one. Gray went 3-for-3 with three RBIs. Taylor scored all four runs for Pitt, going 2-for-2 with two walks.

In game two, senior Kayla Harris (6-1) toed the rubber, throwing a complete game shutout, allowing four hits and one walk. Taylor added to her big day, going 1-for-3 with a walk and two runs scored. Her six runs on the day give her 122 for her career, putting her in fifth place in program history.

The third game of the series was supposed to be played Saturday, but was cancelled due to inclement weather. The Panthers travel to Athens, Ohio, to face Ohio University Tuesday, March 27 before returning to Pitt for their home opener against Duke.

The Panthers kept it close in their three-game weekend series at home against No. 19 Duke, winning one and losing two. Pitt lost 12-6 Friday despite a late-inning run, but bounced back Saturday with an 8-7 victory before falling short Sunday, 6-5.

Duke controlled early Friday, jumping out to an 8-1 lead after the first three innings. Redshirt sophomore Kevin Henriksen threw 4.2 scoreless innings in relief with four strikeouts, but after he was pulled, the Blue Devils put up another four runs.

Pitt had a bit of a ninth-inning rally, scoring five. Sophomore left fielder Nico Popa hit his first career home run as part of the effort, driving in three.

Pitt scored its sole victory of the series Saturday, backed by a four-run fourth inning. Duke pulled within one in the fifth, but senior first baseman Nick Banman hit a two-run home run, his second of the season, to put Pitt up four.

Duke rallied late, but the Panthers were able to hold them off. Redshirt senior Matt Pidich earned his third win of the season, twirling 6.1 innings with four strikeouts and four walks. Junior Yaya Chentouf earned the save, his fourth of the season.

But the Blue Devils were able to come away with the series win Sunday. Sophomore RJ Freure started for the Panthers, throwing 5.0 innings and allowing three hits while walking two and striking out eight.

The game was tied 5-5 heading into the ninth inning, and Duke scored the go-ahead run on a close fielder’s choice at home. Pitt was unable to come back to win in the bottom of the ninth. Chentouf earned his first loss of the season.

Pitt is now 12-9 and 2-7 in the ACC on the season. They travel to Morgantown Tuesday to play West Virginia at 6 p.m.

Pitt failed to pick up its first ACC win of the season this weekend, dropping a 6-1 decision to Virginia Tech at Burrows-Burleson Tennis Center Friday and losing 5-2 against No. 21 Virginia Sunday.

Bartolome was the only Panther to win in singles against Virginia Tech, as her opponent had to retire due to injury. Bartolome dropped her first set 7-6, but was up 4-3 in the second set when play was stopped.

Against Virginia, senior Callie Frey and first-year Camila Moreno clinched the doubles point with a 6-3 victory over the No. 12 team of sophomore Rosie Johanson and junior Meghan Kelley. The team of Bartolome and Lucas also won in doubles, 6-1.

Okamoto was the only Panther to win in singles competition against Virginia, defeating sophomore Hunter Bleser 7-6, 8-6 and 3-2.

After their trip to Virginia, the Panthers sit at 6-8 and 0-7 in ACC play on the season. Pitt returns home to the Oxford Athletic Club next weekend to face Syracuse and Boston University Friday and Sunday, respectively.