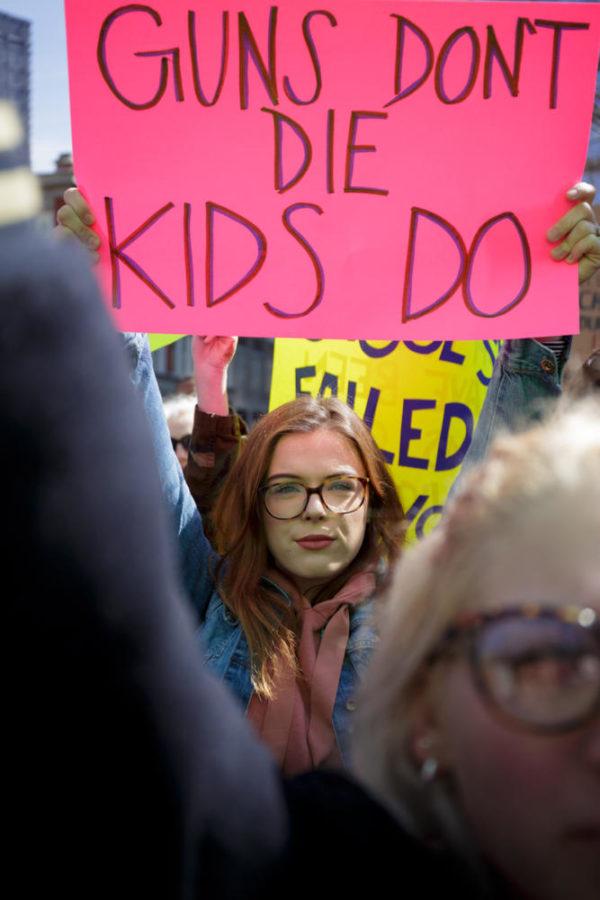 A demonstrator participates in the March For Our Lives rally, in which protesters demanded stricter gun control laws Saturday morning. (Photo by Thomas Yang | Visual Editor)

For most of the participants at anti-gun violence marches in cities across the country Saturday, there was a broad agreement: Gun laws are currently too lax, and we need to tighten them up to avoid future carnage.

Some people, however, were busy proposing bizarre alternatives to gun control.

On CNN’s “State of the Union” show Sunday, former U.S. Senator Rick Santorum, R-Pa., suggested students who had participated in gun control rallies the day before would be better off asking themselves “how do I, as an individual, deal with this problem?”

“Those are the kind of things where you can take it internally, and say, […] ‘Here’s how I’m going to help the situation,’” Santorum said. “Instead of going and protesting and saying, ‘Oh, someone else needs to pass a law to protect me.’”

There’s a lot to unpack from Santorum’s inability to care about more than one issue at once. It should be obvious students can both learn CPR and advocate for gun control laws simultaneously. But what’s more concerning than the ex-lawmaker’s bout of “whataboutism” is the startling extent to which he and others are willing to go to avoid even considering stronger gun laws as a solution to America’s school massacre problem.

The GOP has traditionally seen itself as the party of personal responsibility. That’s why, on the surface, Santorum’s calls for students to “be responsible and deal with the problems that we have to confront in our lives” don’t seem out of the ordinary. But look again and it’s clear just how extreme that line of thought is. It’s hard to see how Santorum justifies any government at all if he doesn’t think it should be responsible for stopping people from killing other people.

But Santorum is no anarchist — he’s just a garden-variety hypocrite. Just ask him about his position on an unborn fetus’ personal responsibility to avoid being aborted, for example. Along with much of his party’s national leadership, Santorum carefully selects when and where he wants to be principled about the role of government in individuals’ lives. The lives of high school students, in this point of view, are simply not worth the government’s time and effort to protect.

If conservative leaders in government are willing to totally abdicate their responsibility for the people they serve, it seems unlikely that other workable solutions will emerge. A school district in eastern Pennsylvania announced last week it would be arming teachers in classrooms with five-gallon buckets of rocks to toss at intruders in the event of a shooting.

The solution to governmental inaction on gun control comes off as practically prehistoric, speaking volumes about the extent to which Second Amendment fetishism has paralyzed American society. It invites comparisons with a time before humans banded together for the mutual protection of a political body.

A government that does nothing to protect its citizens from violence is just as good as no government at all, and politicians who oppose basic legislative actions to preserve our lives have no place in modern society.