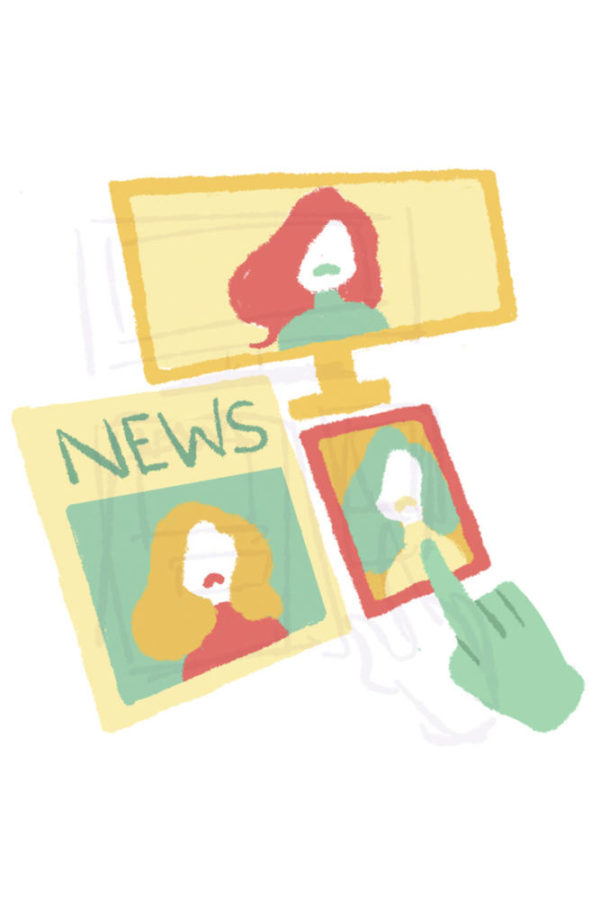 You may or may not have heard about the school shooting that took place last week at Great Mills High School in Maryland. Two students were shot, and the teenage murderer committed suicide briefly after.

The day of the shooting, my friend in the area was shocked and feared for her community. But when she told me what happened, I was shocked and confused that no one was talking about it. This was the second school shooting in a month, and it was barely covered in the news.

Instead, my phone was flooded with dozens of practically identical articles covering Trump’s alleged affair with adult actress Stormy Daniels, his potential firing of special counsel Robert Mueller, his congratulations to Russian President Vladimir Putin for re-election and even the suggestion that Russia has secret dirt on him.

There seems to be a common pattern between these stories — and it’s not just that they all involve Trump. Three out of the four seem to cover speculation rather than fact. This is a common trend in today’s media.

In the last month, we’ve seen two school shootings, and Austin, Texas, was rocked by a series of bombings. And tensions with Russia and North Korea continue to rise and could be forming the foundation of a potential war.

ISIS showed that it has maintained its presence last week with an attack in Afghanistan on the celebration of the Persian New Year, showing that terrorism continues to be a threat to this world.

On a more positive note, for the first time in years, Israel and Palestine are in the midst of peace talks, and the talks seem to pose an optimistic outlook on mending relations. If this goes positively, it could have a major impact on Middle East relations.

Yet none of this is dominating the conversation because the media is hyperfocused on releasing any and all information that portrays Trump in a negative light. Not only is this damaging to the public’s knowledge on current events, but it is contributing to a politically divisive nation with no compromise in sight.

The Stormy Daniels scandal is just one example of the media’s coverage on Trump, but it is very representative of the trend in news outlets to cover anything inflammatory, regardless of its relevance or importance to the nation.

The most widely watched “60 Minutes” interview ever aired last week featuring Stormy Daniels and her affair with the president that took place 10 years ago. Daniels’ story shouldn’t steal valuable news coverage when, during his campaign, dozens of women came out with accusations of sexual misconduct against Trump — the majority of them allegedly occurring while married to Melania Trump.

A year after the campaign, Daniels comes out with a story addressing Trump’s unfaithfulness, and the media is enthralled by the affair, as if this is different from his prior behavior. If he assaults women, this behavior is expected — if not already assumed.

“This is not a ‘[#]MeToo.’ I was not a victim, I’ve never said I was a victim. I think trying to use ‘Me Too’ to further someone else’s agenda does horrible damage to people who are true victims,” Daniels said in the “60 Minutes” interview.

Of course, it would be shortsighted to ignore Trump’s lawyer’s payoff to Daniels during the campaign — a possibly illegal act that certainly deserved media attention at the time. But belaboring an act that occurred years ago does nothing to help the situation or move forward.

After a year in office, Trump’s behavior is more than predictable. Americans have become well-versed in the hyperbolic antics he spits into the Twittersphere, like when he congratulated Vladimir Putin on his election win last week.

“I called President Putin of Russia to congratulate him on his election victory (in past, Obama called him also),” Trump tweeted March 21. “The Fake News Media is crazed because they wanted me to excoriate him. They are wrong!”

It’s clear Trump’s unsavory remarks like this can easily turn Americans away from his administration and the Republican party in general, but choosing to focus on them only widens the gap.

Trump’s stubborn behavior has been established between his childish tweets and inappropriate comments. But it seems the media falls for every offer of bait — if news outlets truly cared about the kind of coverage their viewers want, they would place the needs of viewers over their own need for high ratings.

Lindsay Maizland, a writer with Vox, went to her Michigan hometown to ask residents how they felt about Russian scandal news coverage in television media. The common answer — it’s not that important for Americans.

“I’m tired of hearing about the Russia thing,” Nancy Androsky, a Michigan resident, said in the article. “Let it go and move on. The media is the one that’s propagating it. They just won’t let it die.”

Perhaps the best way for news outlets to draw in viewers is to cover events and stories that actually matter to them — and no, Russia isn’t exactly taking first place.

Though media polls from news outlet MSNBC show sky-high ratings related to the Russian investigation, those ratings aren’t representative of Americans at large.

A recent Harvard-Harris poll showed that while 58 percent of people polled care about Trump’s place in the Russian scandal, 73 percent worry that MSNBC’s coverage of the event takes the spotlight away from issues that affect Americans, like health care.

The more the media attacks the White House, the more Democrats and Republicans will polarize their views of one another.