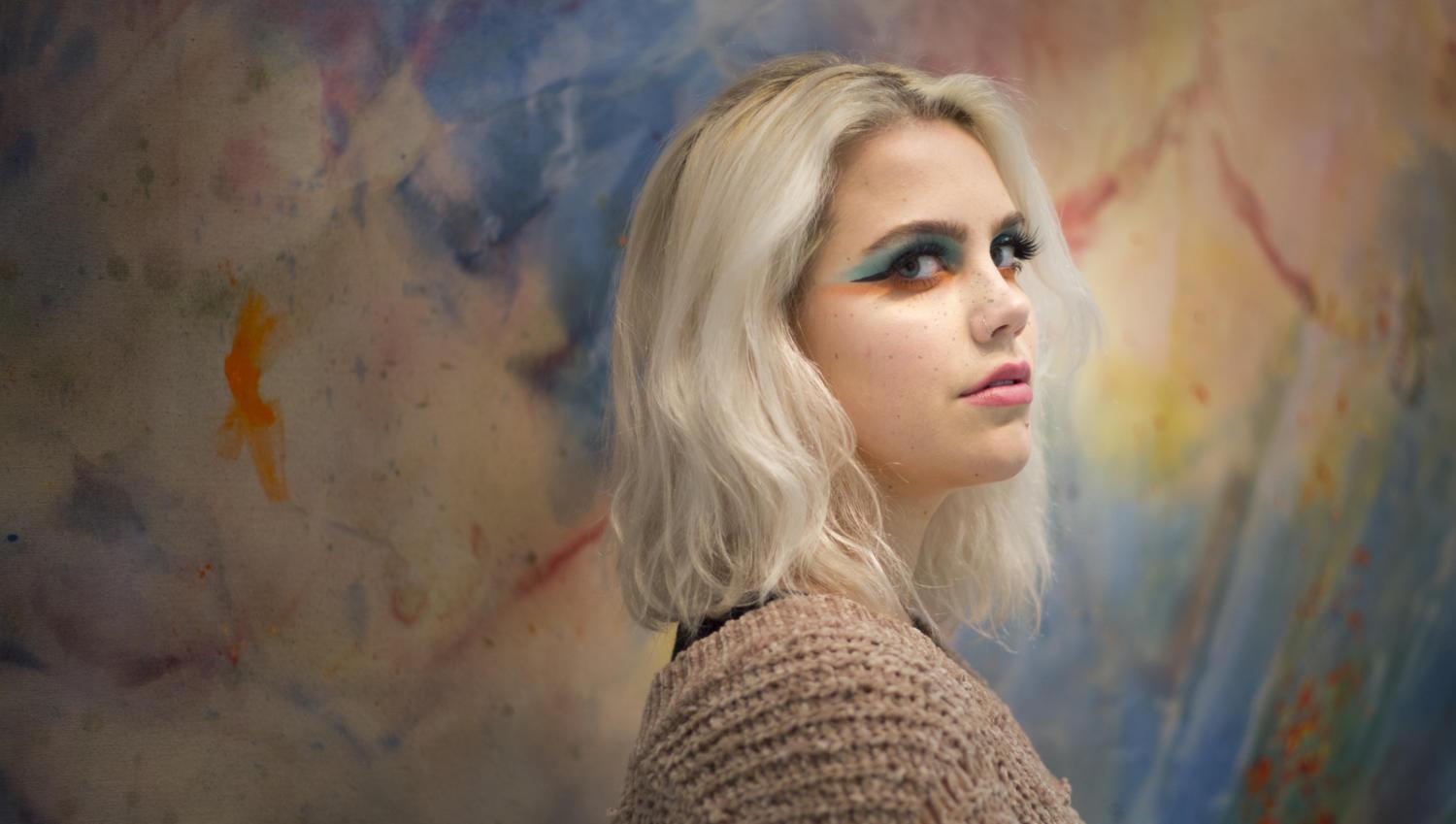 But now she finds herself at the provisional vanity on any given weeknight preparing to do another kind of work. She has everything ready in front of her — a tube of ColourPop concealer, a NYX Ultimate Brights eye shadow palette, a pot of shimmery, kaleidoscopic craft store glitter, a dazzling ring light and stand-alone mirror.

Her camera is there, too — ready to go as she prepares her tools. She pins her white-blonde hair back as she pats a shade of lime green shadow across her lid and crease, followed by a deeper hue in the center. She highlights the inner corners of her eyes and brow bones, finishing with a latex shine gloss, mascara and fluffy false lashes.

And the glitter, of course.

“I really need to find some cruelty free cosmetic-grade glitter!” she later writes on Instagram.

When she’s finished, she takes a few last photos of the look — snapshots of one of her made-up gray-blue eyes, usually the right one, in sparkling green and opal makeup — and sends them to her computer.

But the Allison Park native wasn’t always good at the art of beauty. It started in middle school — or maybe a bit before — when she would wear makeup in secret, hiding the burgeoning craft from her well-meaning mother.

“I would actually sneak eyeliner and makeup wipes to school, and get there early and put my makeup on at school and then take it off before I went home so I wouldn't get yelled at,” Del Prete said.

The makeup wasn’t all that great, either, she recalls.

“I did my eyebrows so thin, I plucked, like, all of them all off,” she said, cringing. “I was so horrible with that."

She opens her laptop to skim through her photos, her eyes flitting across the screen for the perfect shot. Though her looks may have been a little lousy at first, she improved. She joined the makeup crew for Hampton High School’s drama club, and quickly rose as head of the team in her sophomore year.

“I got some experience and lessons in special effects makeup there,” Del Prete said. “But I don't have any formal training.”

As high school — and her makeup skills — moved along, she remembers her looks doing the same.

“I used to wear bright lipstick to school every day. I would do a full face of makeup and fake eyelashes, too, every day,” she said. “I would wake up at like 5 a.m.”

Though she no longer does full faces every day, Del Prete still takes her craft seriously — treating it as a form of therapeutic self-expression and creativity.

“I kind of fell out of doing art and music and stuff in college, just because you're busy and with friends all the time,” she said. “I feel like everybody kind of falls out of their artistic endeavors in college."

Among these friends is Pitt senior political science and communication major Jeanna Sybert. Sybert met Del Prete in their first year while they were living on the same floor in Tower B, and she says Del Prete — now one of her best friends — is one of the most creative people she knows.

"She could do any artistic thing and she would be successful," Sybert said. “She’s great at makeup, drawing, she’s probably great at photography, too.”

With her final JPEGs ready, Del Prete sends them to her phone for light edits, posts them to her avant-garde-inspired Instagram account — @nightmaring — and waits for the feedback to trickle in.

Del Prete started her account in mid-December, and in around four short months it has garnered more than 2,500 followers. That number grows by the day, but Del Prete wasn’t always sure about even starting the account in the first place.

“I had a lot of self-doubt and a lot of impostor syndrome about it because I wasn't formally trained,” she said. “But I was following a lot of accounts that had that kind of avant-garde, editorial look, and I started to really like that and I thought I could do the same thing. Honestly, I saw these accounts and was like, 'I can do better than a lot of these guys.'"

The makeup artist community on Instagram — though vast and seemingly endless, with thousands of accounts and counting — has responded well to Del Prete’s looks.

“I found Ana a few months ago, back when she was a smaller makeup page. I instantly loved her work because it’s so unique compared to what I usually see on Instagram,” she wrote. “There’s a lot of people who stick to basic cookie-cutter makeup techniques and she just does whatever she wants, and always makes it look good.”

Others responded with the same enthusiasm for @nightmaring’s looks and online presence.

“I follow her cause she is really talented and her work is really unique,” @kassandrarummel wrote. "She is so sweet and kind I absolutely am in love with her work.”

“I’ve been following her since I started my account and I just loveeee how unique and creative all her work is! There’s no one else like her on Instagram!” @gracies.makeup wrote.

“I really admire her creative looks! [A]nd I also like supporting other [makeup artists] who I think deserve more love and appreciation,” @shharleen wrote.

Though this particular Instagram community of makeup artists — also known as “MUAs” by those in the industry — seems overall positive, there are darker parts of the internet craft.

In addition to paid deals with makeup companies that can alter one’s intentions on the site and general drama within the community, Del Prete cites the very nature of Instagram as somewhat deceptive — designed to keep users coming back.

And, though her hobby has become a great success, Del Prete still plans to pursue another passion of hers professionally — hoping to leave Pitt and attend graduate school this year to work on a career in counseling and therapy.

With majors in psychology and communication and a minor in gender, sexuality and women’s studies, Del Prete hopes to use these skills to help women and members of the LGBTQ+ community.

Sybert thinks she’s more than capable of accomplishing any goals she has.

“She really cares about people, gives thoughtful advice to anyone who asks for it,” she said. “She's wildly intelligent.”

But even if Del Prete doesn’t pursue a professional career in makeup, she doesn’t see herself stopping her sessions in front of the mirror — armed with the latest palette and an army of feathery brushes — anytime soon.