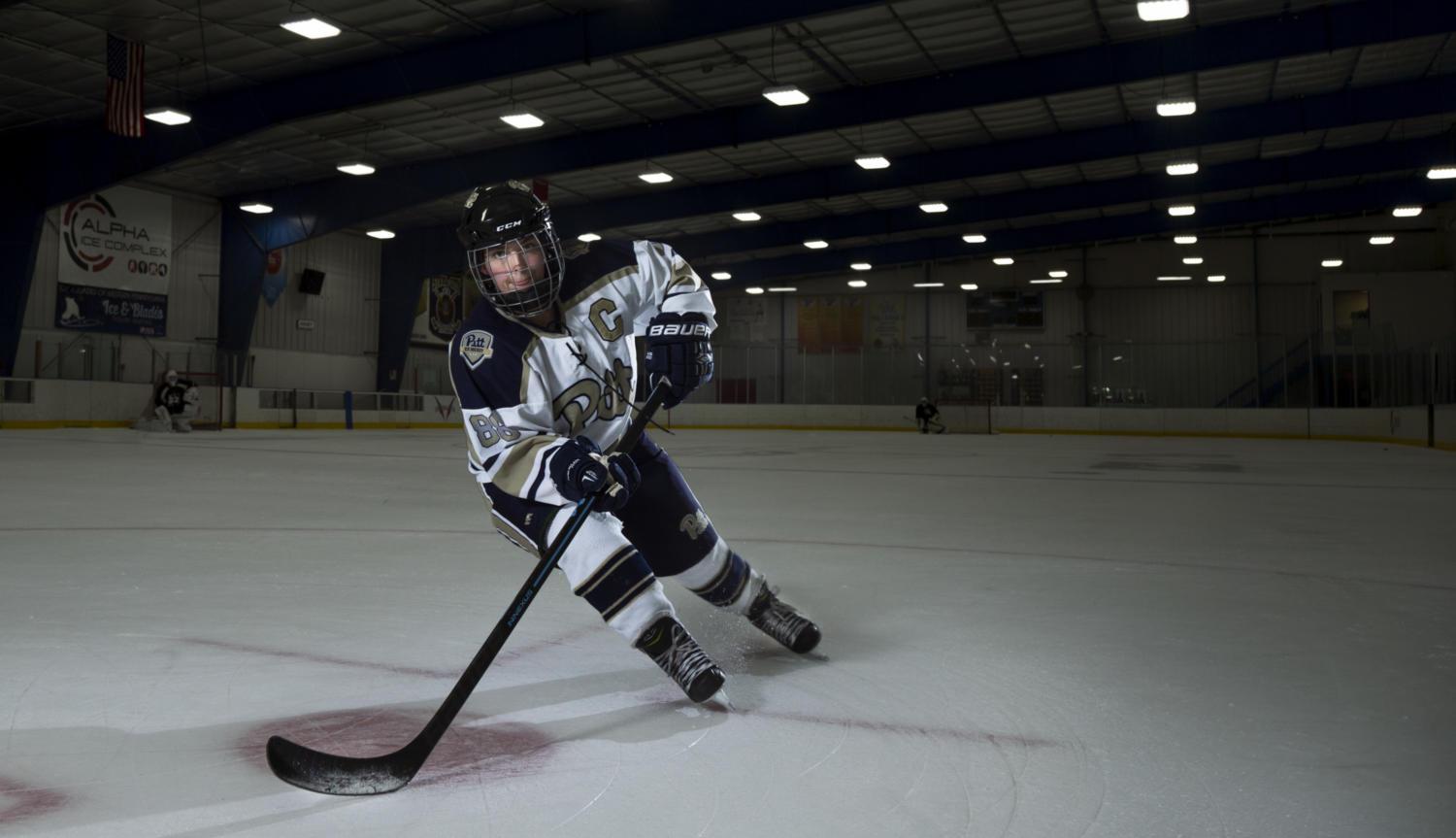 Jackie Sharp: For the love of the game

If you had told Jackie Sharp two years ago that she would eventually become the first Pitt women’s ice hockey player to have her number retired, she would have thought you were crazy. At that point, there was no women’s hockey team at Pitt, and Sharp hadn’t played organized ice hockey in nearly eight years.

“I loved hockey as a little kid. But I wasn’t allowed to play — my parents wouldn’t let me,” Sharp said. “It wasn’t until I was 11, when I begged and begged them, that they finally said I could play in-line [roller] hockey, no checking.”

Sharp, a Pittsburgh native, played competitive roller hockey for three years — often on boys travel teams. During her first year in high school, though, she talked her mom into letting her play ice hockey for the nearby Taylor Allderdice Dragons.

She played for just half a season before suffering a devastating setback — but the injury didn’t occur on the ice.

Sharp was walking home from school one day on her usual route, which took her through Oakland. While crossing the intersection at Fifth Avenue and Atwood Street, she was struck by an oncoming car that ran a red light.

“I was actually fine, for the most part. I had this really thick laptop in my backpack, and it snapped in half, which saved my back,” Sharp said.

Paramedics rushed her to the hospital, where doctors performed a series of X-rays and scans to detect any underlying damage. They didn’t find any significant injuries resulting from the collision, aside from a few bumps and bruises. They did, however, discover that Sharp was missing half of her C4 vertebra in her neck — a defect that had been present since birth but previously went undetected.

Then she heard three life-changing words from the doctor — no contact sports. Her mom made sure she obeyed. With that prognosis, Sharp’s ice hockey career was over just a few months after it began. But it didn’t take long for her energy to be channeled into another activity — robotics.

Two weeks after the accident, Sharp joined the robotics team at her high school, the Pittsburgh Science and Technology Academy, after one of her friends suggested she check it out. She felt an instant connection.

“I fell in love again,” Sharp said. “I went from being ‘all hockey’ to now being ‘all academic stuff.’” 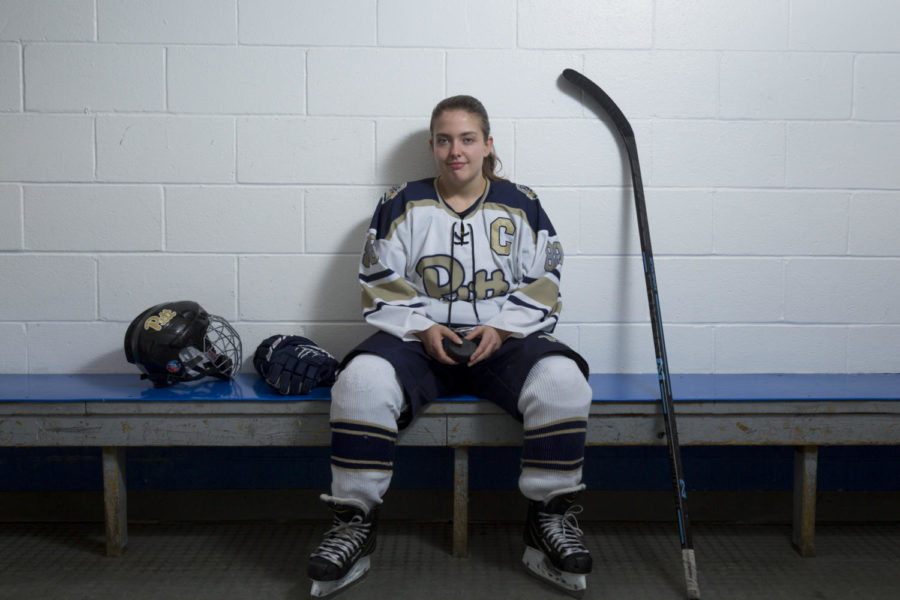 As part of the team, she competed in robotics and battlebots tournaments throughout her high school career. Sharp left high school in 2013 as a member of her school’s inaugural graduating class. She decided to pursue robotics as a career, so she enrolled in the mechanical engineering program at Pitt and at the same time became the first member of her family to go to college.

Sharp often worked a full-time, 40-hour week on top of an already-busy class schedule during her first two years to help pay tuition, including jobs as a skate guard, flower deliverer, tutor and babysitter. Sharp also worked as a Resident Assistant — two years at Panther Hall and one at McCormick Hall — and it was during this time that the Pitt women’s ice hockey team started to take shape.

“I was sitting there, helping out with some Green Team event,” Sharp recalls. “And this freshman comes up to me at Sutherland [Hall], and we get to talking about hockey, how she plays and how I used to play. And she says, ‘Well, we’re gonna start a women’s hockey team!’ And at first I was like, ‘Yeah, okay. Freshmen.’”

But Sharp kept in touch with that first-year student — Dana Julian, now a junior— and the two started going through the steps of creating a club hockey team. After making calls, attending meetings, recruiting and fundraising, they had everything they needed for a team — a coach, Pitt alum Jim Napoli, a league — the Division II American Collegiate Hockey Association — and nine players.

But playing hockey still posed a danger to Sharp. The condition that ended her participation in middle school never went away. But now that she was an adult, she decided to take the risk.

“I shouldn’t play,” Sharp said. “I only have tissue around the area of the missing vertebrae, and it could potentially puncture the vessel to my brain. I play for the love of the game.”

Sharp also had to make another sacrifice — sleep. Due to class schedules and ice availability, team practices started at 6 a.m. Tuesdays and Thursdays at the Shady Side Academy rink. This meant she had to wake up at about 4:30 a.m.

“At practice, Jackie was always the first player on the ice, usually at least 10 minutes prior to the start of our practice, working on skills either on her own or with one of the coaches,” Napoli said. “Jackie's youth hockey career was cut short, and it seemed that she wanted to make up for lost time.”

Every young team has to start somewhere, and the Panthers club didn’t exactly look like the Pittsburgh Penguins in their first season. The team lacked an experienced goalkeeper, so Sharp volunteered to get in the net despite having no competitive experience at the position of her own.

“[Jackie] wanted this team to be successful more than anything,” senior teammate Bre Doherty said. “She is incredibly dedicated and passionate about the things she truly loves.”

The Pitt women’s ice hockey team went 1-15 — dead last in the league — in its first season, with Rochester Institute of Technology being the lone opponent to fall prey to the upstart Panthers.

“We were god-awful,” Sharp said. “But the amount of recruiting we did last year, and the amount of students we met with … it was crazy.” 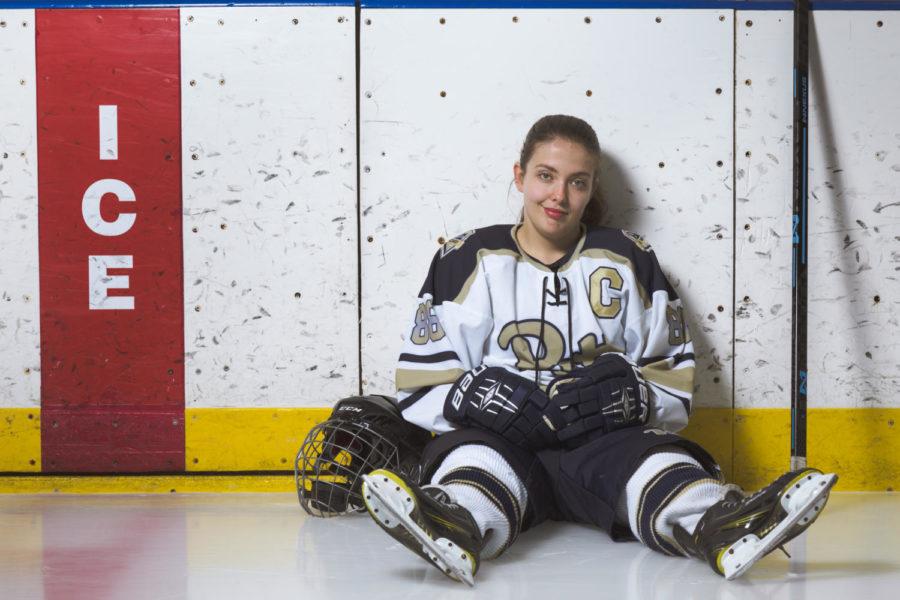 The heavy recruiting efforts paid off — the team nearly doubled its roster size from nine to 17 players in the second season. One of those recruits was graduate goalkeeper Katie Pucci — a transfer from Penn State — whose presence in goal allowed Sharp to shift back to her natural position on defense.

With the more experienced and newly reloaded roster, the Panthers went 11-6 during the 2017-2018 season and finished eighth out of 25 teams in the ACHA standings. Before its last home game of the season, the team also announced that it would honor Sharp by retiring her number — 88.

That 10-game improvement earned Pitt its first playoff berth, where the Panthers lost to the eventual champion Buffalo Bulls in the opening round.

In addition to the drastic one-year advancement in the win column, Sharp also emphasized the empowering nature of the team.

Doherty picked up on Sharp’s impromptu recruiting style, noting how she tries to inspire any girl she meets.

“It's a running joke on the team that in 2028, we're going to have 100 girls coming to Pitt saying, ‘Jackie Sharp told me I could play hockey for Pitt,’” Doherty said. “Because anytime she sees a young girl wearing something hockey-related or at a hockey game, she goes up to them and talks to them about our team.”

While this will be Sharp’s last semester at Pitt, one thing is for sure — she’s impacted the school, and the women’s hockey team specifically, in a way that will be seen for years to come.

“I just want to say that my hockey team has been a great advocate for getting people to come to Pitt,” Sharp said. “It’s been really awesome, to see women’s sports grow.”