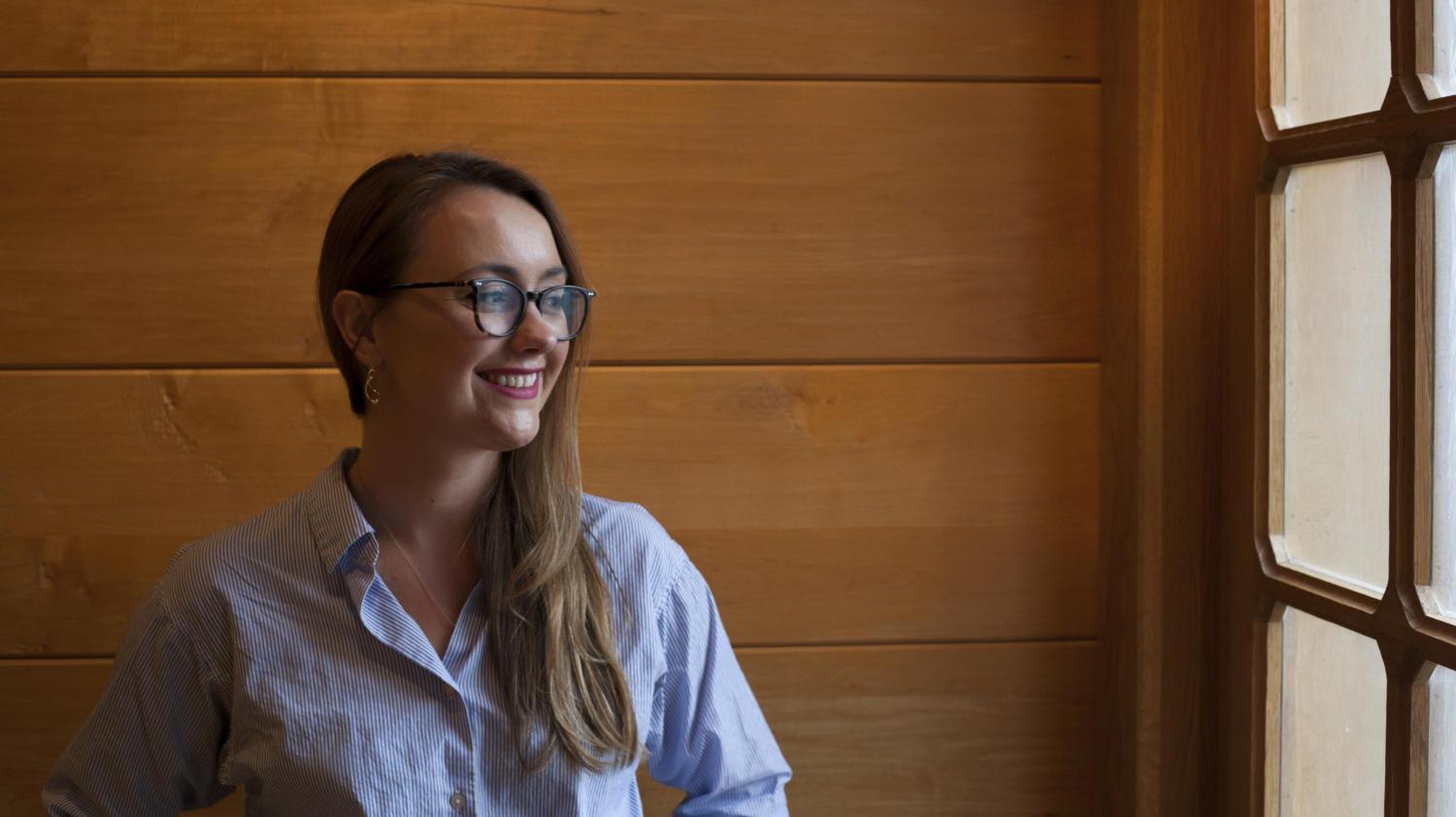 Two years ago, Maureen West often found herself settled in her home office, hooked on watching CBS news on her computer. Every now and then, she’d spot someone on her screen and take a snapshot.

When she saw her friends, West would whip out her phone and flaunt her pictures.

“Look at this photograph, and tell me what you see in it,” she would say.

She wanted her friends to notice something specific, something strange and unsettling about the images. Each showed people in suits bustling around a room, squinting into laptops and television screens, with cups of coffee abandoned on a desk.

Most of West’s friends couldn’t figure out what was wrong.

Hidden in the corners of each photo was West’s daughter — Emily. Sporting a pair of square-frame glasses and dark blonde hair, either fastened into a bun or tucked behind her ears, the young Ph.D. candidate at New York University had accepted an analyst position at CBS in January 2016.

“I was looking for [my friends] to notice that she’s the only woman in the photograph,” the senior West said.

The younger West, now a Pitt professor in the  political science department, stuck out at CBS. About to defend her dissertation at New York University, she was fresh, young and often the only woman in the room among a crowd of older-male colleagues. But she didn’t just look different.

Among her team of about 10 analysts, West was the only one to predict something her peers thought impossible — Donald Trump winning the presidential election.

“I believed that people were overconfident in believing that [Trump’s] controversial candidacy was a detriment to him,” West said. “But I actually didn’t take it that way, I saw some things that made me think, ‘He has a shot.’”

Leading up to the general election, when she wasn’t tracking election results, West was developing a statistical model using multilevel regression and poststratification, or MRP, and data from YouGov — an online survey company — to predict which way states would swing in November.

Unlike everyone else, her model showed Trump winning Wisconsin, Michigan, Ohio and Pennsylvania by narrow margins — key swing states he went on to win during the election.

This was controversial, and West wasn’t sure whether to believe the numbers herself. But she felt she was using her inexperience to her advantage. As a new analyst, she didn’t have strong prior beliefs about how elections unfold, which gave her a unique perspective on the election.

She also felt comfortable enough with her boss and mentor — Anthony Salvanto, director of CBS News elections and surveys — to be adamant about the accuracy of her statistical model. 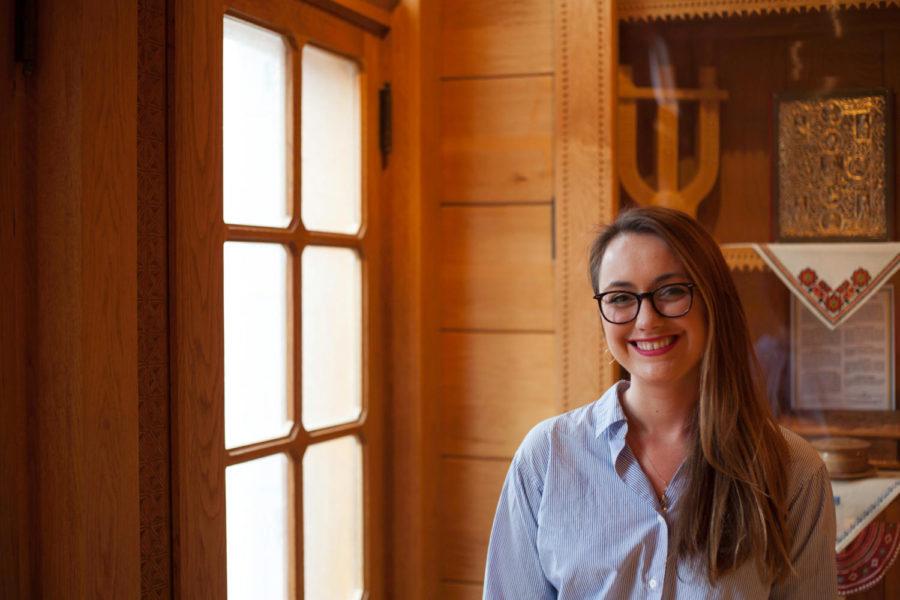 Election nights — for both the primaries and the general election — were a whirlwind. West and her fellow analysts sat behind big-name news anchors like Scott Pelley and scrambled to use exit polls and demographic voter files to assign states either blue or red.

“They’re like emergency room statistics,” West said. “There’s high stakes and high pressure to get an answer, 30 seconds sooner is a big deal, because you’re trying to beat NBC for their calls.”

That entire year was high pressure for West. In addition to late nights at CBS, she was an adjunct professor in the political science department at NYU’s Wagner School of Public Policy. And she was applying for jobs — which would lead her to move to the South Side and accept a position as an assistant professor in the political science department at Pitt in fall 2017.

Her office in Posvar Hall is sparsely decorated. A coat hangs off a hook in the entrance, and four rows of books on a wall-length bookshelf feature titles like “Understanding Ethnic Violence, “When Does Gender Matter?” and Statistical Models.”

Wearing a striped blue shirt, West leaned back slightly in her chair as she spoke, one leg crossed over the other. She had a bright voice and tenacious smile. Beaming, she explained how her journey to the bustle and glamour of New York City began at a Quaker high school tucked away in Bucks County.

West attended George School, where her mother teaches theatre, from grades nine through 12. With its community-orientated values and multicultural student body, George School encouraged her to do service work in Cuba and consider identities and inequalities around her.

“I was exposed to a lot of different types of people, given I lived in a pretty homogenous town — a white, upper middle-class town,” West said. “I was just always taught from an early age that it was important to value diversity and inclusion.”

Despite zig-zagging through career options, including journalism, George School’s values encouraged her to study political science, specifically African politics, during her undergraduate education at NYU.

But her mother said lively political debates in their household sparked her daughter’s interest in politics.

“I’m a very staunch Democrat, her father on the other hand is a very staunch Republican,” her mother said with a laugh. “Without arguing, we have some fairly strenuous debates in our household.”

“My dad and I joked that we would go into the booths next to each other and cancel out each other’s votes,” West said in an email. “You can probably guess then who my dad voted for.”

At CBS headquarters, as data continued to stream into the Decision Desk Nov. 8, 2016, analysts realized Trump was taking the lead in the presidential election. By 8 p.m., they were certain of the outcome.

While she felt good about her spot-on election prediction, the feeling was overshadowed by how surprising the night was for everyone at CBS once results came pouring in.

“Everyone was pretty shocked and sort of numb when we started to see what was happening that night,” West said. “Even Republican-leaning academics were sort of shocked in a way that made it very somber on the desk.”

Now, she brings her experience as a data analyst at CBS to the classroom, by teaching a political psychology course at Pitt.

“[Students] should be at least very skeptical and aware of the amount of uncertainty that lies in any kind of polling analysis,” she said. “There are things that I try to make my undergrads very aware of so that they are very savvy consumers of polling estimates.”

As students scribble down notes from her slides or sneak a couple minutes of a March Madness basketball game on their laptops, West stands in front of the classroom and asks undergraduates to consider gender bias in politics.

“She’s got a lot of information in her head,” Ian Callahan, a senior electrical engineering major in West’s class, said. “[She makes sure] you have the best picture possible to form your own interpretation.”

During the beginning of the semester, she spoke with her students about being the only data analyst at CBS to predict Donald Trump’s victory.

“It was nice of her to tell that story,” Callahan said. “It just shows how in-touch she really is with the political environment and what people actually think.”

As for West, while her accurate predictions were never published, she impressed Salvanto enough to always have a job as a data analyst at CBS.

“He met with me when everything calmed down and he said, ‘You have a position on the desk, the Decision Desk, for life,’” she said. “He puts together a team for the midterms, so I hope to go back.”