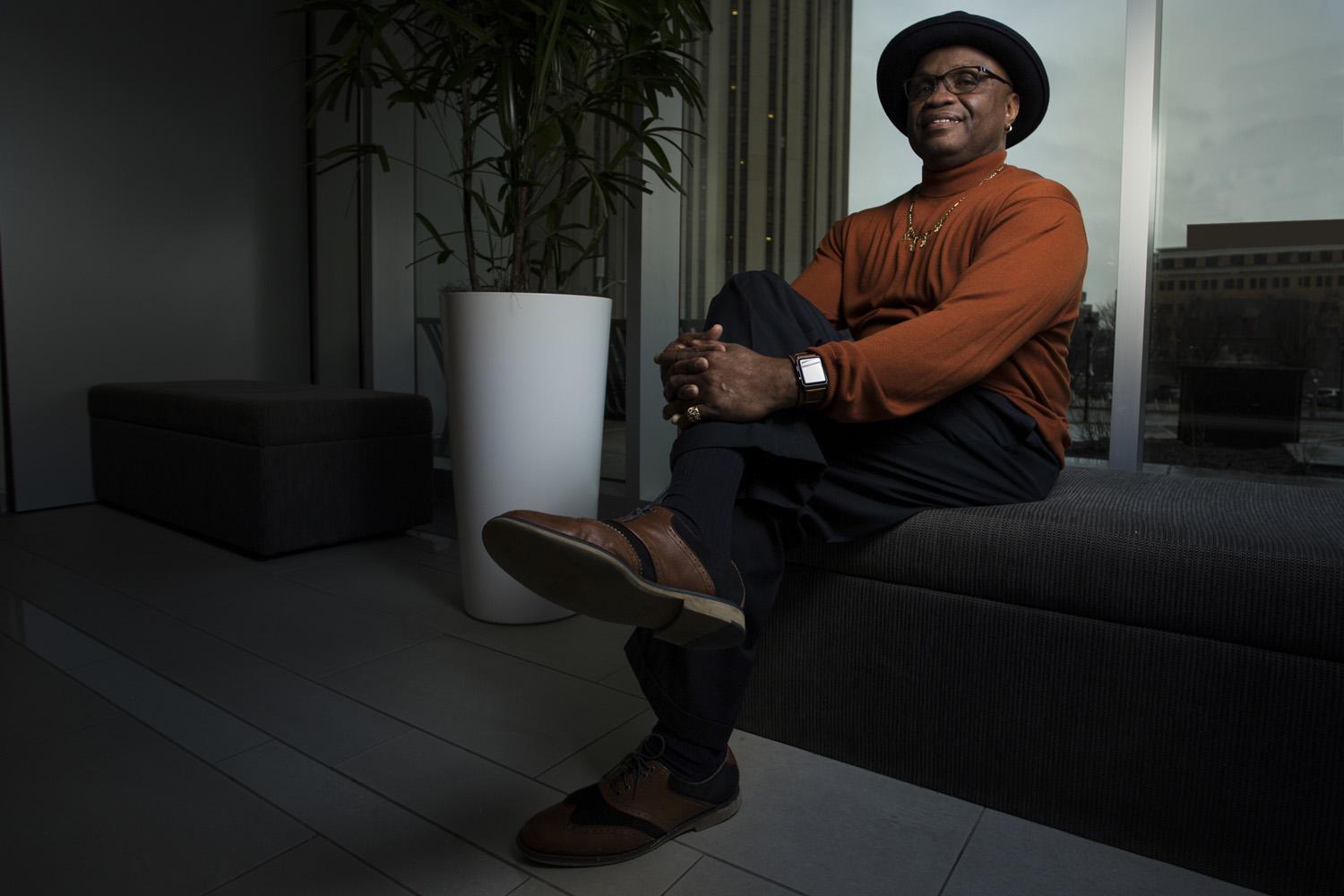 Driving around Allegheny County on a brisk mid-March afternoon, Richard Garland refuses to use the GPS in the dashboard of his black Chevy Tahoe.

Instead, the car’s screen displayed a zoomed out map and XM Radio’s Soul Town station as Garland made right turns, left turns, wrong turns and U-turns on his way back to Pitt from McKeesport Area High School.

“I guess we’re taking the scenic route,” he said as he rested one of his gloved hands on the steering wheel and apologized for the 45-minute journey.

But it was on that long drive that Garland was most comfortable opening up about his wrong turn-filled past — and the way it influences him in his current role as a Pitt assistant professor of public health and director of the Violence Prevention Initiative in the Center for Health Equity. 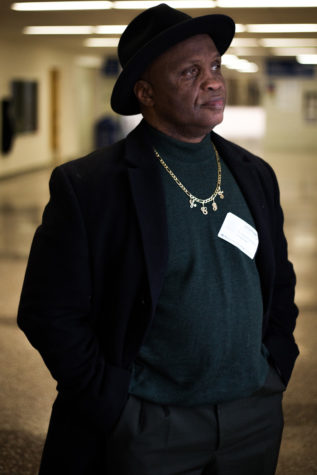 Garland is now one of the most well-known and respected anti-violence experts in the area, said Lee Davis, a life coach who works with him at Pitt. But Garland was once just like the at-risk young people he seeks to help.

“I had ‘short man syndrome,’” Garland said of his childhood. “Everything was about how good I could fight.”

Garland was raised by his grandmother until he was 13, when she was unable to take care of him. His lack of support led him to become involved in gangs while living in Philadelphia’s Frankford neighborhood.

“I was trained to be a gang member,” he said.

Garland, who is 65 but looks a good 10 years younger, spent more than a third of his life in prison. He was charged with conspiracy to commit murder and hindering arrest apprehensive and prosecution, landing him in prison from 1979 to 1991.

He said he was “wild” as a “young buck,” and prison kept him out of trouble and off drugs. “I’ve been blessed,” he said. “All those years in the penitentiary preserved me a lot.”

By the time he left Western Penitentiary — the recently closed Pittsburgh-area prison, later called SCI-Pittsburgh — Garland was a different person. He credits much of his transformation to the anti-establishment MOVE movement. Garland was a supporter, not a member, of the Philadelphia-based radical group, but his most vivid memories from Western Pen revolve around MOVE.

Garland remembers exactly when he learned nine members of MOVE were accused of shooting a Philadelphia cop — August 8, 1978. Though MOVE claims the cop was killed from friendly fire during a shootout, nine members — including women who held babies during the shootout — were sentenced to life in prison.

When Garland entered SCI-Huntingdon in ’79, he met some of the men sentenced for the killing. He was attracted to the group’s belief in natural law, a principle that says there are universal laws inherent in nature.

“We all need the same air to breathe, we need water to live, we need food to exist,” Garland said. “MOVE kind of chilled me out.”

While at Huntingdon, Garland refused to cut his dreadlocks — which all members of the group wore — a rule violation that put him in solitary confinement. But a few years ago he had no choice but to cut his hair.

"It started falling out so now I'm back to wearing hats,” he said. It's rare to see him without a fedora.

But if you want to see a photo of him with his dreadlocks, simply head to the Carnegie Library and check out his 2004 biography, “That’s All In It: The Richard Garland Story.” On the cover of his 306-page history — as told to the writer John A. Taylor — beams Garland wearing an era-stylish sweater and chain.

As he recounts in detail in the book, Garland remembers another date very clearly — May 13, 1985. The Philadelphia Police Department, which classified MOVE a terrorist organization, dropped a bomb on the group’s West Philly row house during a shootout. Police said MOVE started the gunfight, but the bomb and resulting fire killed 11 people, including five children.

The bombing has been largely forgotten by the city and the country — “literally stuffed down the  memory hole,” as Temple professor and journalist Linn Washington puts it.

But it had a profound impact on Garland, then at Western Pen, who says officials at the prison came into his cell and said he’d never get released because of his support of the “terrorist organization.” Despite the threat, Garland got out of Western Pen in ’91 and finished the bachelor's degree he started in jail, graduating from Pitt one year later.

Kicked out of high school at age 16, Garland was now back — this time as a drug and alcohol teacher in Pittsburgh Public Schools. Then he returned to school as a student, earning his master’s in social work from Pitt in 1996. He bounced around anti-violence nonprofits for the next few decades, eventually founding One Vision One Life, an organization that tried to prevent retaliatory violence. After a lack of funding killed the organization in 2012, Garland found his way to his current job at Pitt.

Working in academia has been an adjustment for Garland, according to Steven Albert, who co-directs the VPI. Garland’s experience is in more direct intervention, so he has to “walk the fine line” between getting people services and dealing with the goals and bureaucracy of a research institution.

“[Pitt] is a big operation and we move slowly,” Albert said. “The paperwork must be excruciating for someone who's used to getting out in the field and talking to people.”

Garland’s nontraditional background is to the benefit of the VPI, Albert said. His experience in working directly in underserved communities leads him to critique some common practices at a place like Pitt. He said the academics’ research in poor communities often lacks insight from people on the ground.

“You can’t just research one part of a community and make a blanketed decision,” he said. “One block to the other — kids and parents think totally different.”

His solution — walk the streets and talk to kids. “Ear hustling,” he calls it. That’s just what he was doing at McKeesport Area High School in March as superintendent Mark Holtzman gave a tour.

“You play football?” he asked one 10th grader during lunch.

“No, I golf,” the student, built like a star linebacker, replied. Golf, Garland said, is his favorite hobby — he can rattle off the names of the PGA Tour’s leaders until you get sick of it.

“The only reason I’m an expert is because I listen to the kids,” he said. “It’s the kids telling me what’s going on.”

He takes what he learns in the streets and forms a monthly list with all the fights and beefs around the county. He sends the list — dubbed “Shot Watch” — to hospitals, schools and other community groups so they know what to watch out for.

Garland and his team in the VPI treat violence from a public health perspective. Along with people like Davis, Garland works to interrupt “the transmission of the disease of violence.”

Davis, whose position is funded with a grant from the Allegheny County Health Department, has known Garland for 20 years. Garland mentored Davis, keeping him out of trouble by constantly checking in — until Davis eventually gave in and took his advice.

“He’s always put himself on the line to help guys like me,” he said. For Davis’ generation — the “hip-hop generation” — Garland is a legend.

So when Garland reached out with a job offer when he received the county grant last year, Davis immediately accepted due to his passion for preventing violence. Garland has the same passion — he could easily sit back at his desk on the sixth floor of Pitt’s public health building, but instead he is joining Davis on homicide scenes in Braddock and talking to 10th graders about golf.

However, when he is in the office, Albert said his co-director “sounds much more like a public health academic” than he did when he was hired in 2012.

But he has years to go before he blends in at Pitt — not that that’s his goal. Garland is the only professor who has ever called me “homie,” and he usually avoids vague buzzwords — though Albert has caught him talking about “protocol” and “infectious processes.”