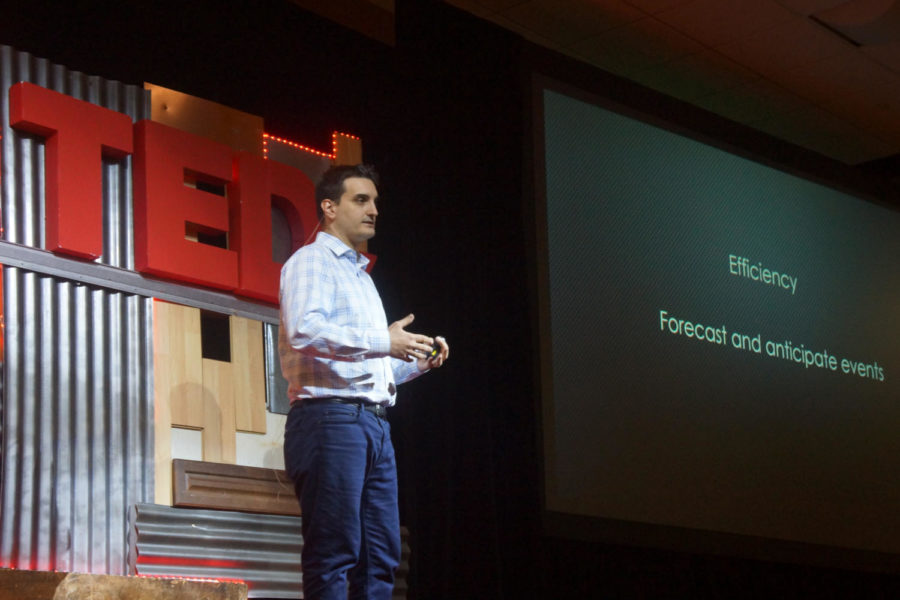 Konstantinos Pelechrinis, associate professor at the School of Computing and Information, discusses the future of smart city planning at Saturday’s TEDx University of Pittsburgh event. (Photo courtesy of Ian Callahan)

By Briana Canady and Zane Crowell | The Pitt News Staff

Growing up in the South Side of Chicago, Jasiri Oronde Smith’s childhood was “100 percent black.” His friends, his neighbors and his family were all African-American.

Then his family moved to Pittsburgh in the ’80s while he was still in high school. He met with racism and discrimination as a student at Gateway High School, which motivated him to found a club there called “Our Culture” to represent minority students.

“We petitioned our school, and we got our school to teach its first black history class, and I was off as an activist,” Smith said.

Smith told his story to a group of 130 people in the William Pitt Union as part of Pitt’s fourth annual TED event Saturday afternoon. The theme of this year’s event — which was independently organized and run by students — was (Re)think. Four local speakers from different fields shared their perspectives about how people can “rethink” what they know.

Smith, also known as Pittsburgh-based rapper and activist Jasiri X, was the first speaker at the event. He recounted how he continued his activism later in life, when he began incorporating his beliefs into his music. He posted a song to MySpace called “Free the Jena Six” in 2007, which tells of six black teens in Jena, Louisiana, charged with attempted second-degree murder for beating a white student who had allegedly made a racist joke. Many people claimed the charges were excessive.

Smith’s song ended up receiving widespread exposure, and he went to Jena to perform his song — with 50,000 other people protesting to drop the charges against the students.

“I was on stage with Al Sharpton and Dick Gregory and Ice Cube, and the song became the theme to the movie [The Jena Six], the charges were dropped … and I saw how powerful art could be when it was connected to a social movement,” he said.

Smith said earlier in life he would often try to fight people who would discriminate against him, but he found that music and activism were better outlets.

“So to those people of color and those labeled others, I would ask you to organize, speak out, push back, do something, say something. You might just find your life’s purpose,” Smith said.

Rather than just increasing the efficiency of buses and trains, Pelechrinis said cities need to focus primarily on making public transportation a more attractive option for people.

“We have become prisoners of time, and we feel stressed to reach our destination as fast as possible,” Pelechrinis said. “The smart thing to do is change this mind-set and start considering what will improve the quality of life for people.”

According to Pelechrinis, the stigma surrounding public transportation makes it difficult to get people to use it. This can lead to a cycle in which public transit services continuously get worse because of lack of use and funding — shortchanging the people who rely on it entirely.

Pelechrinis said while most cities look toward congestion pricing — a system of surcharging during peak hours to manage demand — Pitt Smart Living Project is focusing on using products from local businesses to incentivize individuals to use public transportation more often or wait for the next bus or train if the first one they’re trying to catch is full.

“You use an incentive from your favorite local coffee shop, you go and get a free coffee or pastry, interact with the other people that are there and possibly meet your future spouse,” Pelechrinis said. “What a great story that would be.”

Satvika Neti, a digital social justice advocate at the Women and Girls Foundation, spoke after an intermission about how society is moving toward a more intersectional future where interconnections between race, class and other social categorizations are more fully recognized.  She said her goal is to get people to identify with the “hyphens” in their lives, meaning she wants them to embrace the nuances in their identities.

But Neti said making assumptions about people based solely on their gender, race or other social categories doesn’t reveal everything about them and that intersectionality also needs to recognize individual experiences.

Because of these differing experiences, Neti emphasized the importance of using intersectionality and individuality to find solutions for issues in American society.

Before he was employed at CMU, Lockton worked on product design projects in London. While there, he became more interested in how tools, such as apps that instruct people to exercise or sensory brakes for inattentive drivers, affect the way people operate in society. He told the crowd they should try to see tools as a way to recreate society rather than allowing them to dictate it.

“It’s the idea that we design things, but actually the stuff that is designed ends up designing our lives to some extent,” Lockton said.

Lockton said he hopes the work being done by imaginaries lab will be able to “change the behavior of the system we’re in rather than our behavior being changed by design.” As of now, the lab has several projects underway, including studying qualitative data in order to help people explore their own and each other’s thinking and their relationships and agency with systems.

Hamed Safi, a first-year political science and history major in attendance said events like TEDx are interesting because it’s a way to understand the world around her outside of a classroom environment.

“You can go out and do things on your own time and hear what other people have to say about things,” Safi said. “It’s just a really good way to broaden your horizon.”