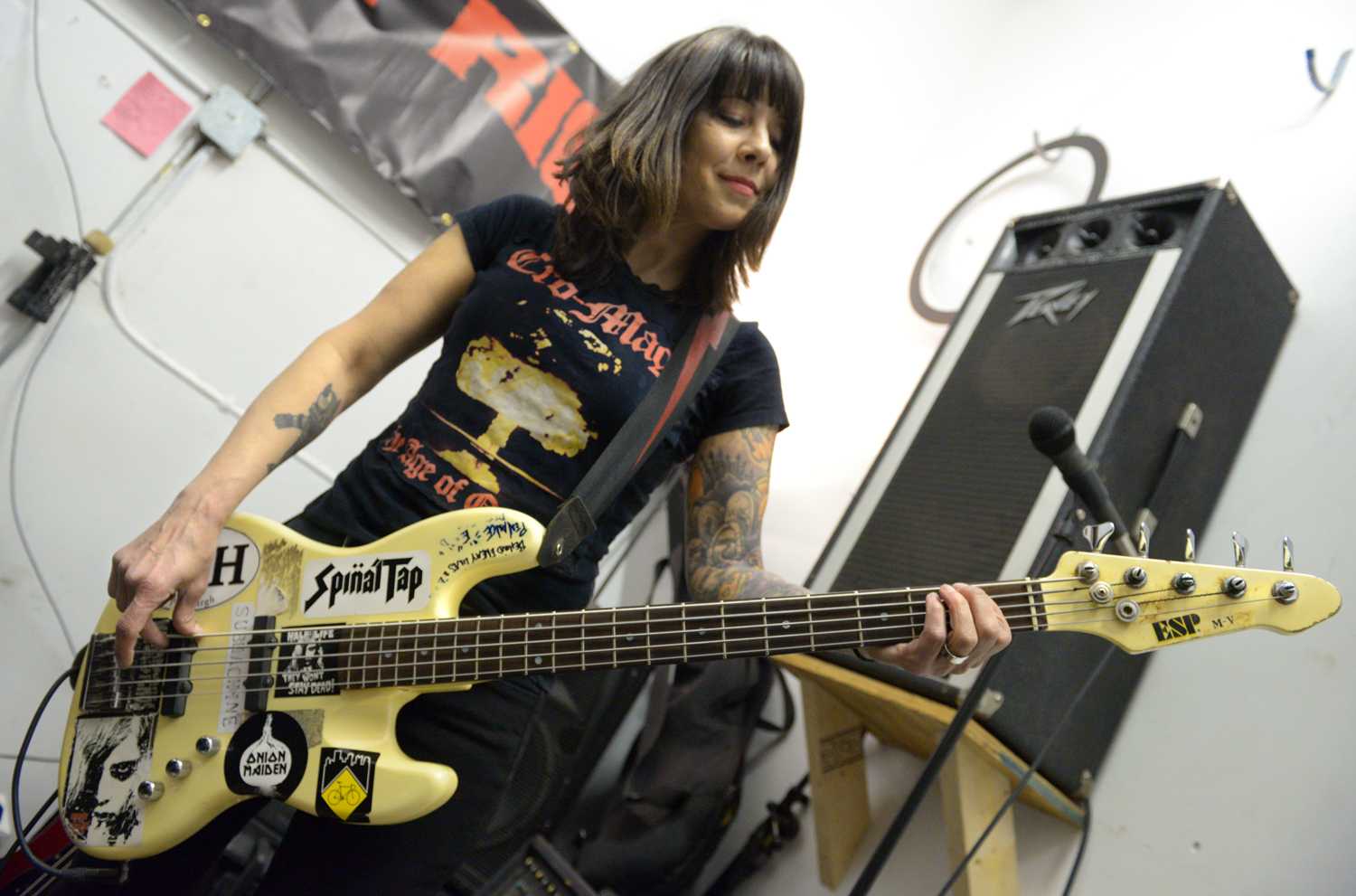 On the seventh floor of a nondescript South Side storage locker facility, the industrial walls and bare floor shake with the reverberations of a heavy metal bass line.

The sound is surging from a cramped rehearsal space at the end of the hall. Inside, the Mud City Manglers practice for an upcoming benefit called Jailbreak — which will both honor the late Malcolm Young of AC/DC and fundraise for Scrap the Trap, a local activist group encouraging policy change for animal trapping.

Musical equipment clutters the room, concert posters cover the walls and “Metal” Mary Bielich strums a steady bass line from AC/DC’s “Ain’t No Fun” in the back corner.

In her steel-toed shoes and Cro-Mags band T-shirt with colored tattoos trailing up her arms, Bielich is the physical embodiment of a punk rocker. But when she talks, “Metal” Mary exudes an effusive warmth, speaking with equal passion about metal and punk  as she does about animal activism — particularly when it comes to factory farming and mistreatment of wildlife.

“We all kind of walk around with blinders on,” she said. “It’s not really our fault, but unfortunately it has to be our responsibility to look beyond them.”

Bielich has played benefits and tabled for various animal rights causes in the past, but most recently she has become devoted to reforming the Pittsburgh’s wildlife trapping policy alongside Scrap the Trap.

The City’s current policy allows citizens to obtain a trap from wildlife control, trap a nuisance animal in and call the City to come pick up the animal once it has been trapped.

This only exacerbates the City’s problem, said Rebecca Reed, Northside resident and co-founder of Scrap the Trap. It creates a gap for more wildlife to fill instead of targeting the circumstances that are bringing the animals to residential areas in the first place, she said.

“Sometimes, people do drastic things with wildlife because they’re just afraid, and they don’t know and they think that’s the only thing they can do,” Reed said. “So bringing a little bit of magic into it can be a little helpful sometimes in engaging a conversation.”

Bielich recognizes an intersection between activism and the rebellious nature of the underground music scene — a discovery that began during her time as a Pitt student in the late ‘80s and early ‘90s.

She said it was almost second nature that she attended Pitt — following in the footsteps of her older sister and both her parents, who were Pittsburgh natives. Though her father’s job took the family to Gary, Indiana, for most of Bielich’s adolescence, they returned when he accepted a job in Pitt’s athletic department.

Growing up, Bielich discovered new music by plodding through her older brothers’ record collection, perusing the local record store and taking note of the band T-shirts older kids in the neighborhood were wearing. 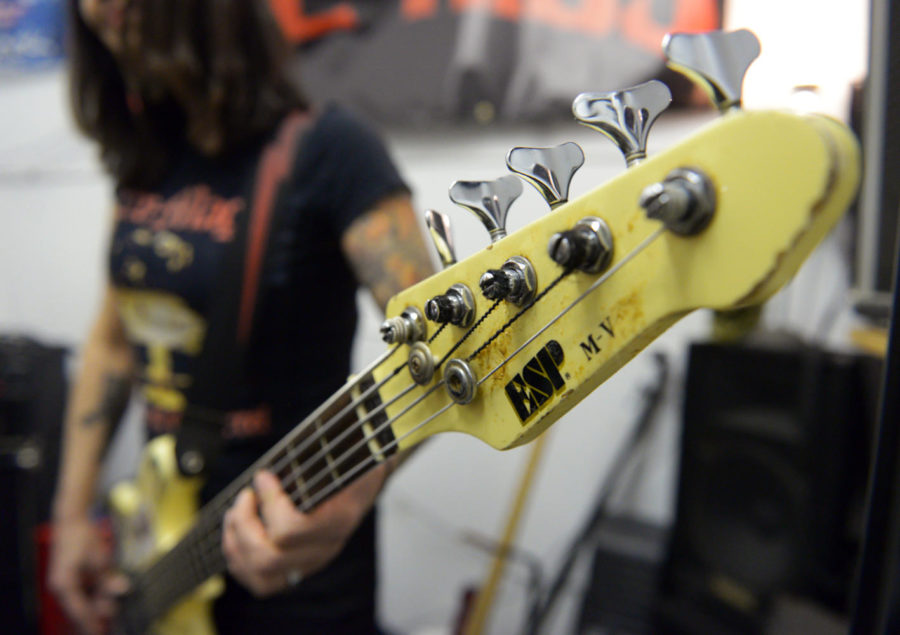 “It was before the discerning taste of music,” she said. “You just bought everything. It was great exposure to just music in general.”

Bielich began attending makeshift punk shows with her older sister when she moved to Indiana. These were often held at skate rinks or community centers — where the underground punk scene then existed in small towns.

When she got to Pittsburgh, Bielich found a flourishing punk and metal scene at places like Eide’s Entertainment, which employed people from local bands such as Half Life, Eviction and Bird of Prey. Bielich said the employees would recommend underground bands to each customer based on what records they bought.

Her education existed as much in communities and spaces outside the classroom as it did in the classical jazz curriculum she studied. When her classmates were studying in Hillman Library, she was playing underground punk shows at local venues like the Electric Banana — now a family restaurant run by the same owners.

On one occasion, Bielich dragged herself to class in a state of near-exhaustion after playing a metal show in Buffalo the night before. Rather than receiving backlash from her jazz instructor, Bielich was met with an acceptance and understanding she hadn’t expected.

At the turn of the decade, punk culture had begun to permeate Pitt’s academic atmosphere. Bands would even host frequent punk shows and benefits for various causes in on-campus buildings such as the William Pitt Union and David Lawrence Hall.

The first punk benefit concert Bielich ever played was an anti-vivisection show held in David Lawrence. A lineup of mostly unknown punk bands from Western Pennsylvania took the “stage” directly in front of the blackboard in a first-floor lecture hall, pulling a crowd of about 500 people and taking a stand against animal testing.

Bielich suspects the raucous nature of these shows is what brought the on-campus punk benefits to an end.

“Everyone is there for the cause,” she said. “Then occasionally someone rips a urinal off the wall and there’s no more shows.”

Bielich attended Pitt during the years when the underground music scene was beginning to thrive. In the college community, these interests culminated at WPTS — Pitt’s student radio station — where Bielich found herself surrounded by individuals who were constantly on the fringe on independent music.

“It was always college radio that gave bands like that their first chance to be played on the radio,” she said. “And it wasn’t about commercial success ... a lot of us obviously snubbed our nose at commercial success, because we were the underground.” 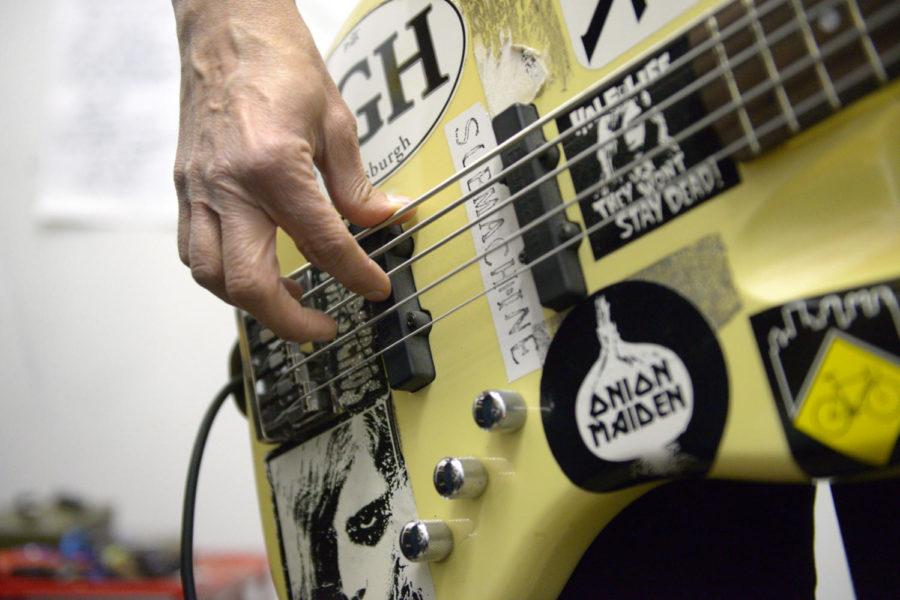 During her time spent at WPTS, Bielich hosted a metal show, communicated with label representatives and interviewed bands touring through Pittsburgh. She also utilized the skills she picked up at WPTS in her postgrad years, working as a sales representative for record distributors and labels while continuing to play music.

Bielich now receives her main source of income as a vehicle operator for Aptiv, an autonomous software company in Pittsburgh, allowing her to play in four different bands — Derketa, the Mud City Manglers, Behind Enemy Lines and Penance — in her spare time. These bands each identify as being within a different subgenre — death-doom metal, high octane punk rock and roll, anarcho-crust punk and doom metal, respectively.

Derketa still finds time to rehearse weekly and play shows at local venues like Howler’s and the Smiling Moose. Between these performances, Bascovsky writes original songs for Derketa, often joined by Bielich, who provides the harmonies.

“I don’t think people give her credit for her talent because she comes across so humble and laid-back, but I’ve learned so much from playing with her,” she said. “She doesn’t really talk about it either, but I don’t think people realize how smart she really is.”

Downtime doesn’t seem to exist for Bielich, but she said it’s become second nature to spend her free time rehearsing instead of catching a movie or spending the night in. She doesn’t chase the elusive “work-life balance” — she prefers to follow her instincts.

“Have yourself covered, protect yourself as much as you can, but don’t lose that energy and that drive to keep doing what you feel you need to be doing,” she said. “And always find time to put back into the world.”