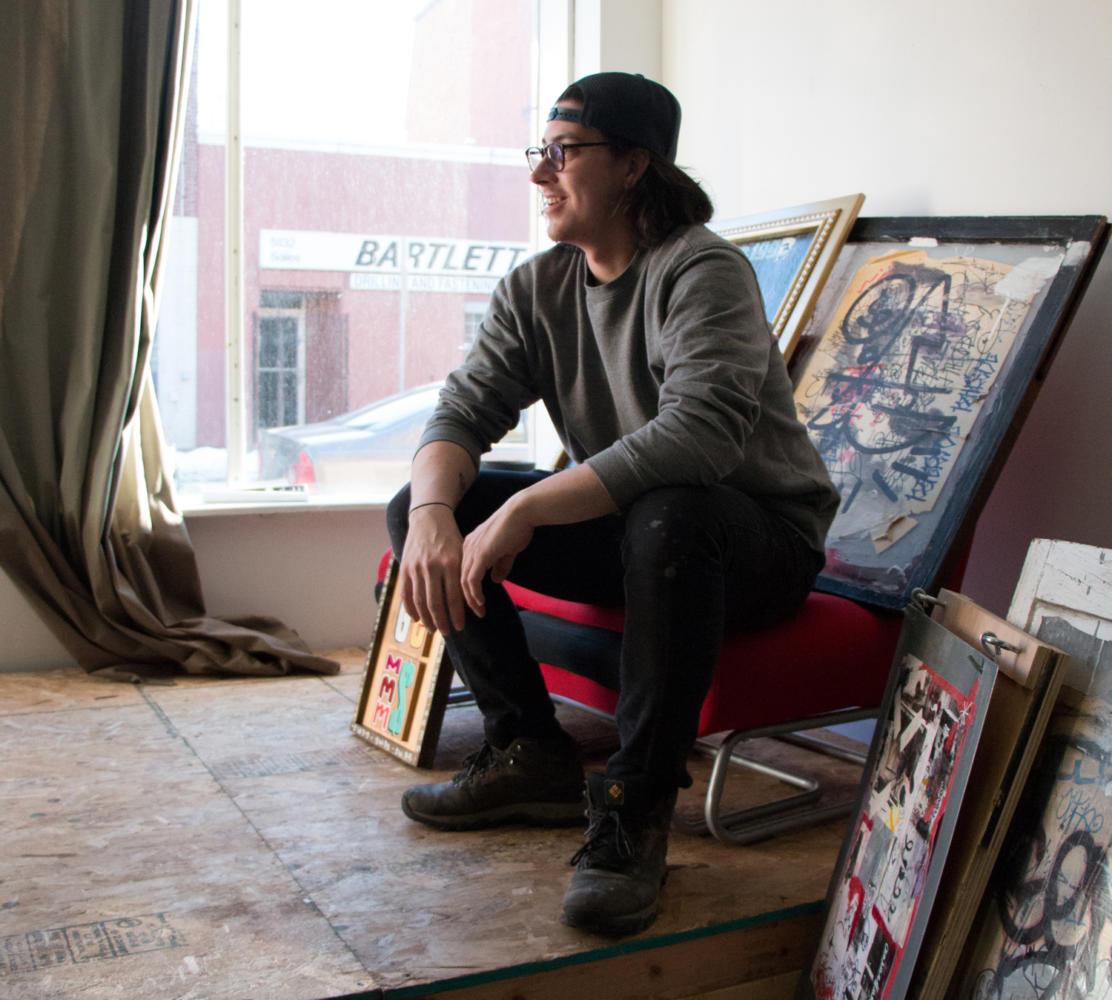 Before Gems and Apathy could watch the paint dry on another one of their masterpieces in Homestead, the pair started sprinting up the hill behind them — they realized a cop had become witness to their work.

“We would run 30 yards, take a break and catch our breaths before running more until we got up this giant mountain,” Apathy said.

Pittsburgh’s most-wanted graffiti artist, Gems, otherwise known as Max Emiliano Gonzales, now refers to himself as the city's “number one reformed bad boy.” While Gems evaded the cops once again, it was only a matter of time before his actions caught up to him.

Gonzales, who graduated with honors from Carnegie Mellon in May 2016, was arrested just a fews months earlier on Feb. 1, charged with 58 counts of criminal mischief for graffiti totalling $114,030 in damage.

His graffiti moniker “Gems” can be seen scrawled on various trash cans, utility boxes and walls throughout Oakland and the greater east end of Pittsburgh. Gonzales was a member of Born To Krush, one of Pittsburgh’s prominent graffiti crews, and would also tag as BTK. Though some of his tags are still up — including one he did above Sushi Fuku in Oakland — many of them have been buffed away.

Gonzales operated in complete darkness, bringing only the essentials, including a telescoping ladder and a few cans of paint. Telescoping ladders are compact, making them easy to travel with, but the aluminum frame would bend under Gonzales’ weight as he painted 15 feet in the air. He describes the feeling as a rush of adrenaline.

“When you’re out in the city between 2 and 4 a.m., and no one’s moving, you feel like time stops. You’re in your own zone. When you’re climbing stuff, you feel a little bit like a superhero,” Gonzales said.

There were no sketches for him to look at and no lights to check for mistakes, each tag emerging imperceptibly different from the last. Even when he was painting burners — larger, more decorative pieces — he moved with flowing precision, transforming lifeless walls into works of art.

“No one’s outside, it’s just you doing you,” Gonzales said.

Gonzales, who was 13 the first time he tagged a piece of property that didn’t belong to his family, recalls seeing graffiti everywhere in the southwest side of Chicago where he grew up. He was immediately intrigued by the craft, and growing up in an old industrial part of the city full of train yards and abandoned factories provided him with an abundance of blank canvases.

According to Gonzales, Chicago graffiti places a larger emphasis on culture than Pittsburgh’s. Gonzales, who identifies as Mexican-American, recalls Chicago’s Most Known — a Latino graffiti crew from the area — as one of his inspirations as a kid. Some of CMK’s elements, including letter styling, dollar signs, halos and other embellishments, can still be seen in Gonzales’ work today.

But he didn’t fully commit to the graffiti lifestyle until moving to Pittsburgh to attend CMU in 2012. He was warned by other writers he had met that the City took graffiti seriously — the Pittsburgh Police Department even had its own graffiti task force. But Gonzales wasn’t concerned.

The task force — which was formed in 2006 — was disbanded in 2012, making it possible for Gonzales’ work to multiply across the city. But Mayor Bill Peduto reinstated the task force in November 2015, just a few months before Gonzales was caught.

“I was their first big break,” Gonzales said.

The reinstated force utilizes a graffiti tracking system — a database of pictures and reports from around the City — to catch taggers. Detective Alphonso Sloan, one of the arresting officers in Gonzales’ case, has been on the task force since its creation in 2006.

“I work to match the photos with the reports,” Sloan said. He reports the task force caught more than 100 taggers since 2006, averaging around one-to-two arrests a month.

Sloan and the rest of the task force was attracted to Gonzales because of the sheer volume of Gems’ tags in the city. The cops were able to prove Gonzales was responsible for the tags because of a backpack that had been turned in to them containing spray paint, photos, sketch books and school assignments identifying him by name.

Just before being caught, Gonzales’ old roommate called to tell him the cops visited his old apartment looking for him. He wasn’t sure if they already knew the location of his current residence, so he began tearing up sketchbooks and scribbling out drawings and stickers. He tossed photos of him and his tags into a huge trash bag.

“I probably had around 20 sketchbooks in my apartment. I was just frantic, like ‘oh my god if they come here today or tomorrow, I’m screwed,’” Gonzales said. “I thought that was the only evidence there was on me. So once I got rid of all that stuff I was like I'm in the clear, I’m good.”

Gonzales was apprehended while in art studio at CMU. The task force never ended up searching his apartment since the backpack contained all the evidence they needed.

Having no other option, Gonzales pled guilty to the 58 counts brought against him. His final punishment included a $38,141 restitution fee, 300 hours of community service and one year in Pennsylvania’s IPP program — more commonly known as house arrest — followed by three years of probation.

He recalled feeling depressed while on house arrest. Gonzales, who played for CMU’s hockey team until he was arrested, also felt out of shape during that time. He only left his house for work and to complete his community service.

But being caught didn’t stop him from making art. In addition to the art he shows in galleries, Gonzales continues to do murals and legal graffiti around Pittsburgh.

Gonzales’ most recent legal graffiti mural can be found in a vacant lot on Penn Avenue, owned by Nicholas Hartkopf between Millvale Avenue and Winebiddle Street.

Hartkopf — who had gotten in trouble for graffiti while in high school — thinks legal walls create a way for artists to express themselves and allow for outsiders of the graffiti scene to see their works as art, and not something that is inherently criminal.

But Sloan is a bit more wary of legal walls. Between 1983 and 1993, the Carrie Furnace hosted such a wall and, according to Sloan, the artists didn’t contain their artwork to the designated areas. Still, he finds some positivity in public art.

“What I can say about public art is that it’s a deterrent for graffiti,” Sloan said. “If you have a nice public mural in the neighborhood, that wall tends to stay untagged.”

Gonzales is currently employed as the digital department manager of Clockwise Tees, a custom clothing shop in Point Breeze. Much of his artwork incorporates elements of graffiti, usually containing textual components broken up by bold colorful images of cartoons and caricatures.

He often collaborates with Jerome Charles, or Chu, who the task force also arrested in 2016. The two first met at a Via Festival party in 2014, two years before they started working together. Many of their pieces offer statements about gender inclusivity, race and other issues affecting LGBTQ+ individuals and people of color.

“I strive for like a C plus in life, but Max has way too much energy for that,” Charles said. “He pushes me to be better with my art.”

The two have a mutually beneficial relationship, according to Gonzales. When he feels like he is too caught up in his pursuit of the professional art world, Charles will remind him to have fun with what he’s doing.

Gonzales, not feeling as though he should have to choose between street art and fine art, has found a way to blend his identity as Gems into his professional career. He agrees legal walls offer a viable future for graffiti.

“Some changes need to be made first,” Gonzales said. “People in the graffiti scene need to feel comfortable putting themselves, in daylight, next to their graffiti. But right now the relationship is one of fear.”