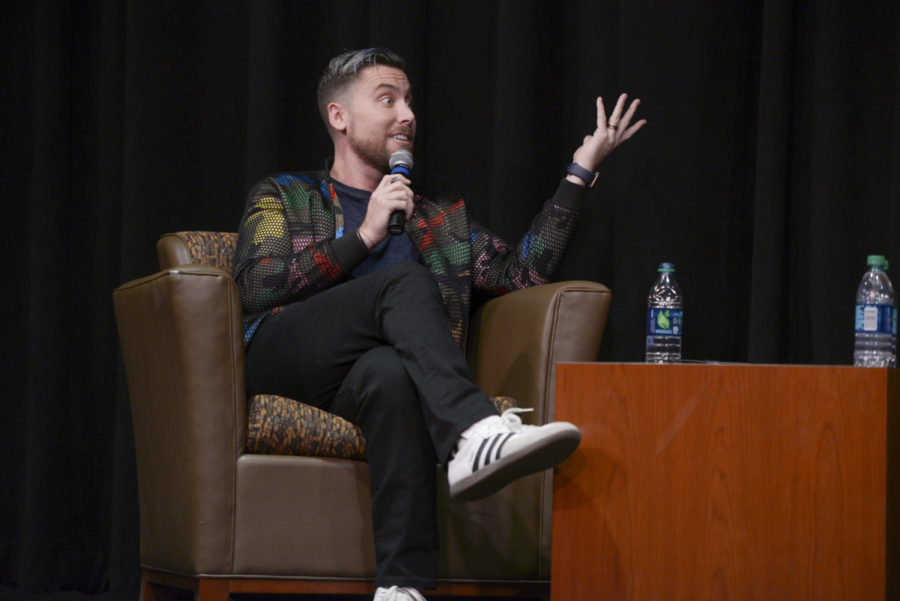 By Sam Weber | For The Pitt News

When Lance Bass looks back on his time in NSYNC, he can’t help but laugh — both at his antics and the crowds often confused by them.

“I found it funny,” Bass said. “Before anyone knew I was gay, I was just Lance from NSYNC and I just humped the stage a lot.”

Bass, a 38-year-old musician, actor and activist, came to Pitt for Rainbow Alliance’s annual Pride Week to share stories of his experience in the LGBTQ+ community, as well as to discuss how he now uses his platform to benefit others.

Bass described how he had been the shyest member of the band as a result of having to play the teen heartthrob in NSYNC, and said that until he was 22, he only dated women. But after coming out at the age of 27, he realized he could use his platform and identity to help a lot more people.

“A lot of doors closed, but a lot opened,” Bass said.

But he wasn’t able to come out on his own terms. While vacationing with a boyfriend in Provincetown, Massachusetts — a gay resort town commonly called “P-town” in the LGBTQ+ community — a reporter for The New York Post spotted him in a bar. The Post published a story outing Bass before he could officially announce it for himself, which he ended up doing in a 2006 People’s Magazine cover story.

“I had meant to reveal it in a bigger way, but I didn’t want to until I knew I wouldn’t hurt the gay community and was in a committed relationship for support,” Bass said.

Bass said that he was comfortable with who he was at that point, but did not know how to share it with everyone.

Bass talked about the importance of support from his friends and family after officially coming out. Coming from Mississippi, he said he was surprised by how open his parents and grandparents were to him being gay.

“They said they were proud of me, but they just needed to be educated,” he said. “And so did I.”

Bass and his family made sure to educate themselves on the importance of activism in the LGBTQ+ community — skills he now utilizes to advocate for people both in and out of his own community.

Rainbow Alliance Business Manager Hope Kay helped organize the speech as part of Pride Week. She said she hopes that people such as Bass will lead students to become more aware of how they can influence both campus and global culture.

“Rainbow tries to bring in people with a lot of influence,” Kay said. “After he came out he used his platform to help the community.”

But after he came out, Bass said, work was hard to find. After leaving the boy band, he found many people in the entertainment industry were resistant to his sexuality.

“I was set to shoot the pilot for a show on CW, and the director told me that no one would watch me play a straight man after knowing I wasn’t,” Bass said. “When I went for other roles, people said I didn’t fit the stereotype. I was either too gay or not gay enough.”

Eventually, he was able to find work on Broadway in the 2007 production of “Hairspray” and on television on “Dancing With the Stars.” But as more celebrities feel comfortable coming out and more movies feature LGBTQ+ characters, such as the recently released film “Love, Simon,” Bass said there will continue to be new role models in the community.

“Socially, we’re getting there,” he said. “We’ve gone over the tipping point.”

And as an activist for causes ranging from LGBTQ+ issues to environmental dangers and animal rights, he’s doing his best to help society get there.

“I’ll show up to rallies and I’ll make sure to speak if I get a chance to talk about what I agree with,” Bass said. “I have this platform, I’d better do something good with it.”

Bass’ mission to promote the LGBTQ+ community has made people take notice of what changes have been made already. Abby Wezelis, a senior computer engineering major, said she sees Bass as a role model. She related to him not feeling connected to the LGTBQ+ community until after he had come out.

“I think it’s really interesting to hear other people’s stories of coming out, especially someone like Lance Bass,” Wezelis said. “It gives you perspective as to how far we’ve come as a society and also how far we have still to go to reach equality.”

Bass said that he is amazed by the progress others have made in fighting for rights in the LGBTQ+ community and for minorities in the past few years. He praised the actions of the Parkland students for standing up for something they believe in.

“We can either look at the negative, or we can be the force for good,” Bass said.