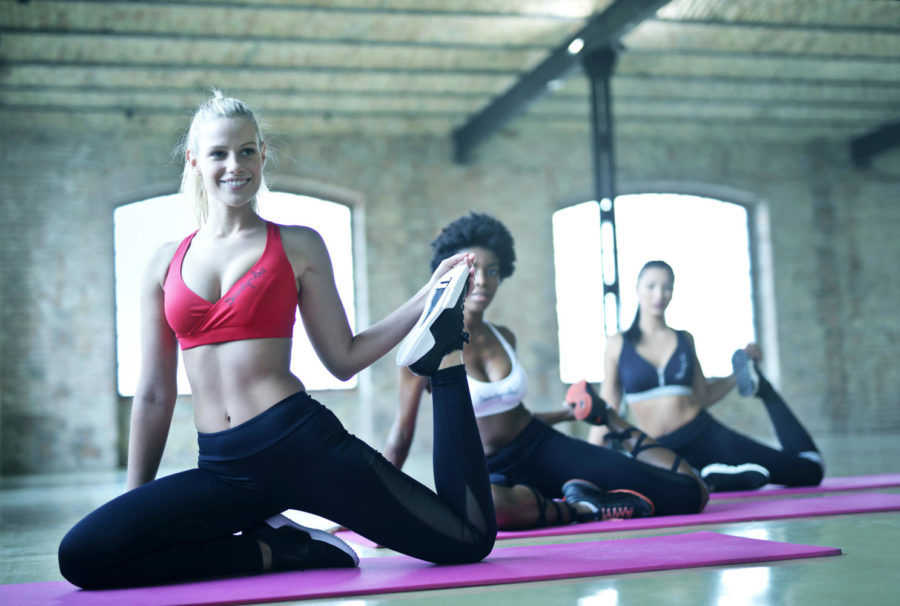 Pilates, to the uninitiated, is merely another hot fitness trend that’s been hyped by celebs and other notables, but the Method’s longevity proves it’s more than a fad. It’s a system of conditioning exercises that was specifically designed to enhance physical strength, flexibility and balance, while also improving on body awareness and mental focus and acuity.

It’s the deep mind/body connection that makes Pilates an excellent choice to decompress during finals. The core principles of Pilates – concentration, centering, control, precision, breath and flow – seem to have been designed for managing stress – physical and mental – and the focus on proper posture, core strength and body alignment can help students recover from long hours in the library.

Created by Joseph Pilates in the early 20th Century as a way to improve the fitness and wellness of fellow interned Germans in England during World War I, the Pilates’ method of body conditioning included a regimen of precisely executed movements designed to engage the entire body. He rigged springs to hospital beds, enabling bedridden patients to exercise against resistance. When the 1918 flu pandemic crippled England, killing thousands, not a single one of Joseph Pilates’ trainees died. He cited this as proof of the of the efficacy of his exercise system. According to Pilates, “A few well-designed movements, properly performed in a balanced sequence, are worth hours of doing sloppy calisthenics or forced contortion.”

Upon emigrating to the U.S., Pilates continued to develop his method, which he called Contrology. He and his wife, Clara, established their “Body Contrology Gym” in New York City in 1926, and they quickly became known for teaching exercise that helped people recover from injury or strengthen their bodies. His method became a mainstay in the dance community, as he trained some of the most important dancers of his time.

Since his death, the work of Joseph Pilates has gained popularity worldwide. From the physically impaired to the professional athlete, the Pilates Method has shaped countless bodies and minds.

Misty Cauthen, owner and Master Instructor of Dragonfly Pilates, became a Pilates instructor in 2001 after experiencing several major injuries that left her at odds with her body. She credits the Pilates Method with “returning her life” in regards to her body and mind. After spearheading several programs around the area, Cauthen opened the first Dragonfly Pilates studio in Murrysville in 2007. Wanting to share the method with a wider audience, she opened the Shadyside location in 2013. She and her comprehensively trained team of teachers work with clients of all ages and ability levels to not only get strong and fit, but also to appreciate and honor their bodies.

Pilates is particularly good for students because of its proven ability to strengthen the body and mind without negatively impacting the joints. The goal is to take the workout out of the studio and apply it to daily life, to minimize the effects of heavy backpacks, computer posture and “tech neck,” and all-nighters. It’s a positive lifestyle choice that will buoy students well beyond finals: Cauthen says her oldest client is an 85-year-young woman who recently hiked the Great Wall of China.

Dragonfly Pilates offers a variety of classes, and their schedule is available on their website, www.DragonflyPilates.com. Three sessions per week are recommended to achieve optimal results, but according to Cauthen, “not everyone has the time and money to do that, so we have membership plans to meet every lifestyle and most budgets.” They have Mat classes, like Mat With Toys, which enlists props that assist or complicate the workout, such as foam rollers, magic circles, bands and balls. They also offer Apparatus classes, which are comprised of Pilates-specific equipment such as the Reformer, Tower and Pilates Chair. In Apparatus classes, any combination of equipment can be used during a workout. Other popular classes are Bodhi Suspension System and Balanced Body Barre. Both formats, while different from traditional Pilates, are grounded in the Pilates Method. Before anyone can take an Apparatus class, they have to first do an introductory private session.

Dragonfly Pilates has an offer especially for Pitt students: Purchase a four-class Mat package for $50. Classes included are Mat, Mat with Toys, Balanced Body Barre, Orbiting the Mat: Suspension Style, and Stretch. Package expires May 15, 2018. Only one card per person. The card is non-transferable and non-refundable and may not be used toward other studio offerings.

To get started or gather more information, you can call the studio at 412-586-5059, or email [email protected] to make an appointment.