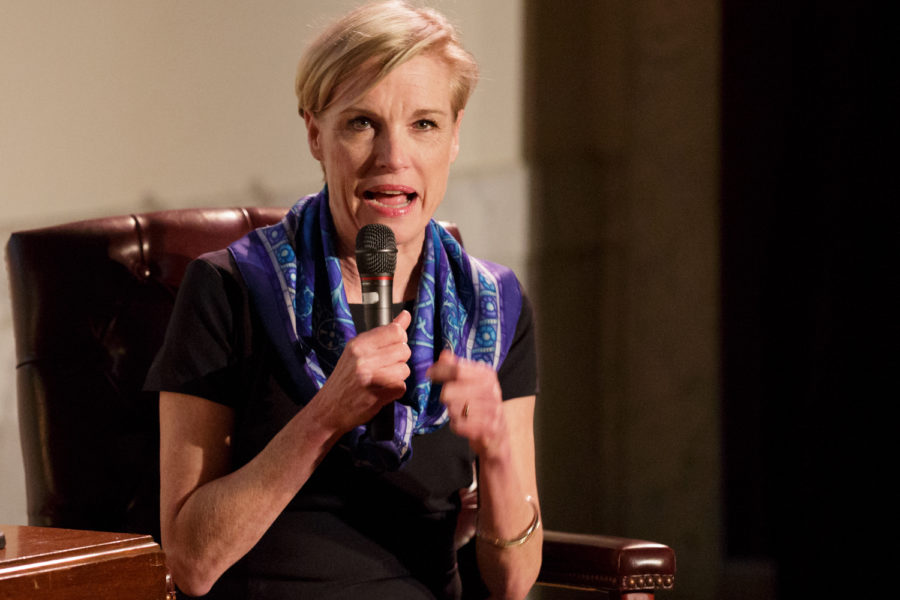 Cecile Richards has been politically active since seventh grade, when she wore a black armband to school to protest the Vietnam War.

When she was called to the principal’s office and asked if her mother knew what she was doing, she replied, “Probably.” Since then, she’s grown to become a leader of political activism.

Richards, president of the Planned Parenthood Federation of America since 2006, released her memoir, “Make Trouble: Standing Up, Speaking Out, and Finding the Courage to Lead,” Wednesday. In conjunction with the release, she led a discussion hosted by Pittsburgh Arts & Lecture on her advocacy efforts and achievements with Planned Parenthood.

Richards’ memoir details her experiences with learning how to lead through a long career of advocating for women’s health care equity and social justice. However, Richards said her book is more than just a memoir.

“It’s a call to action,” she said. “I do think that if there’s one theme of this is, in these times, with everything that we care about, the values of our democracy, just so many rights under assault, we all have to do more than we ever thought we could.”

Richards learned this rhetoric from being exposed to a politically active family. Daughter of civil rights attorney David Richards and former Texas Governor Ann Richards, she studied history at Brown University in Providence, Rhode Island. After graduating, the Texas native began her career as a labor organizer. She worked with service workers, most of whom were women working minimum-wage jobs.

It’s no surprise where Richards’ work in advocacy stems from. She was influenced by being raised in a politically active family with a mother “energized and excited” by grassroots activism.

“She was such a fierce advocate for civil rights, LGBTQ rights, women’s rights, immigrant rights, all of that,” Cecile Richards said.

Cecile said her mother was a housewife who was unable to pursue her goals while she raised four children. As a liberal Democrat, recovering alcoholic and divorcee, her mother was elected as the first progressive female governor of Texas “against all odds.”

“I think it’s a lesson for today, because no one ever gave her a chance of winning. I mean, no one,” Richards said. “But she did win, even though no polls ever showed us winning.”

Like her mother, Richards found her success and established a leading presence despite anti-abortion attacks against Planned Parenthood and other challenges that surfaced along the way.

“Part of my belief as being a good leader in these movements is that you have to bring other folks along,” Richards said. “The organization is stronger than it’s ever been, and so it’s time for me to step aside and make room for somebody else to lead.”

When Kim Evert, CEO of Planned Parenthood of Western Pennsylvania, saw the title of Richards’ memoir for the first time, she said the title was “wonderful and fitting,” since Richards has such a strong ability to lead.

“It’s a perfect title for this strong and passionate and brave woman,” Evert said. “Thanks to her courage and her ability to lead, Planned Parenthood remains a strong organization providing medical and educational services to millions of people each year.”

While she’s not sure what she’s going to do once she leaves Planned Parenthood, Richards said whatever she does next will involve fighting for women’s rights, civil rights and LGBTQ+ rights.

Joanna Kemp, 26, is a Pitt alum that attended the event. She said Richards’ experience in advocacy was “amazing” and “inspiring.”

“She’s just got this amazing history,” Kemp said. “I didn’t realize the breadth of her social justice work.”

But not everyone who attended the event supported Richards. A small group of protesters — part of an organization called Rehumanize International, which seeks to bring an end to all aggressive violence, according to its website — stood outside of the Carnegie Lecture Hall before Richards’ talk.

Aimee Murphy, 29, from Beechview, is the executive director of Rehumanize International. She said that many in the group identify as pro-life feminists and wanted to stand against abortion.

“For many of us who are pro-life feminists, we’re here to advocate for a different, nonviolent, holistic way of feminism that truly honors and values the human dignity of every human being,” Murphy said.

But according to Richards, abortion isn’t a choice for other people to make for an individual. Richards said that many of the United States’ current policies and rollbacks on health care — including on abortion — disproportionately affect women of color, low-income communities and immigrants. She said the disproportionate setbacks against marginalized communities is “cruel and unusual punishment.”

“We have to recognize that that progress is very uneven,” Richards said. “It’s incredible to me that we are still in a country that does not understand that health care should not be a privilege. It is a fundamental human right.”

She said that while current policies need reform, it’s up to future generations to complete the work and encouraged younger populations to take action.

“It’s so important that we invest in young people and students as organizers and leaders,” Richards said. “It’s really important that we all look at where we are, what we’re doing and figure out how we do more.”