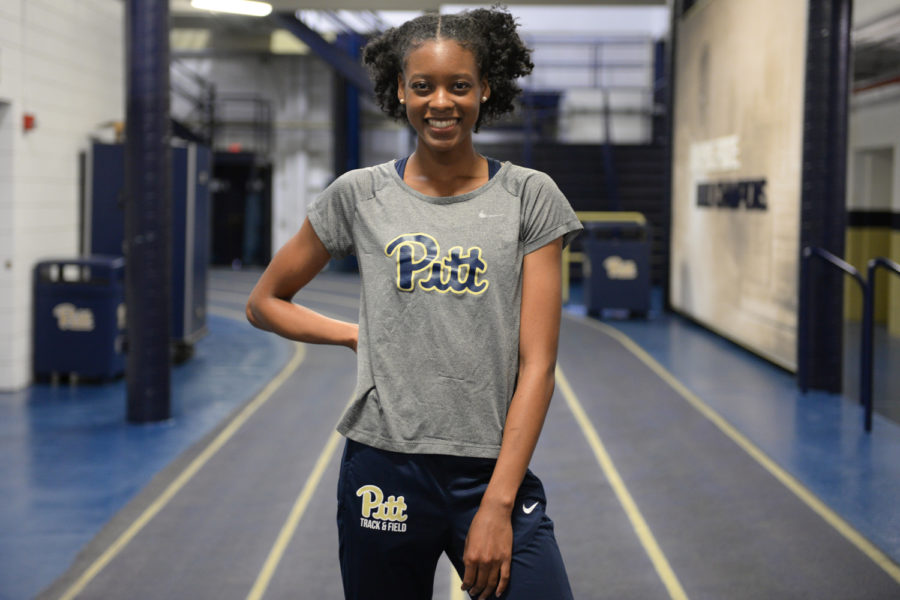 Senior Desiree Garland never intended to become a collegiate sprinter — she began her high school career as a jumper. But after she finished with the best 400-meter time in replacement of a missing teammate at one high school meet, Garland’s path as a sprinter was set.

The Pitt News caught up with Garland to discuss her path to Pitt, winning the ACC Championships and her career this season and beyond.

The Pitt News: What’s your favorite part about racing?

Desiree Garland: My teammates will say that I love the chase. I run the last leg in the relay, so I actually get to chase people. And they always say that they can tell when I’m ready to chase someone. It’s like the adrenaline and the competitiveness of getting to run next to someone and chasing them down. I really like that aspect of track and field.

TPN: When did you know you were a sprinter and not a long distance runner?

DG: When I started off, I was a high jumper. I didn’t run at all. Then, one day at a meet, one of the girls on the 4×400, she didn’t come at all, so my coach was like, “we need someone to fill in for her.” They are thinking, Desiree high jumps, she can’t run a 400. So they were like, “okay, just try to jog the first 200 and try to finish and then hand the batton off, it will be fine.” When I got the batton, I ran the fastest leg of everyone else at the meet. And they were like, “Wait, you should be running.” So I started to run and jump at that point, and over time I just got better and better at the 400 and kind of cut high jumping out.

TPN: Why did you transfer to Pitt from Akron?

DG: What drew me here was definitely the in-state tuition and just coach Alonzo Webb. I know him personally from growing up, and I knew that Pitt would take me more seriously as an athlete than Akron would. I felt like I wasn’t getting a lot of attention at Akron, and I didn’t think that they were developing me like I wanted to be. We didn’t really lift as much there. I was running fast, but I had a lot of injuries and stuff, and a lot of it came from not focusing on lifting and eating well. Akron didn’t really care what you were doing outside of track and field.

TPN: Did you notice any immediate differences between Akron’s program and Pitt’s program?

DG: The training load. The workouts here are way harder than the one’s at Akron. If you had told me while I was at Akron that I would need to do a certain workout that he tells us to do at Pitt, I wouldn’t have believed I could do it.

TPN: How do you prepare for indoor and outdoor season. Is anything different?

DG: I will say that training-wise they are the same, but your strategy going into the races is different. In indoor you can be at a meet that’s 200 meters or 300 meters or like random 270 tracks. Indoor you’re thinking about getting to the break first. You don’t have to think about breaks in outdoor because you just stay in your lane the whole time. But when you’re in an outdoor race, you kind of start to develop a time in your mind of where you’re at in your race because you’re in your own lane the whole time. How you’re setting up your race in your mind is different.

TPN: How did you make the jump from only making it to the prelim round at last year’s ACC championship to cutting two more seconds and winning the ACC indoor championship?

DG: For me, I focused a lot in the weight room because my coach keeps telling me “you’re not pumping your arms hard enough,” or “you have to be stronger to compete with other girls in your races.” At first I wasn’t really listening as an underclassmen. I was like, “eh, I’m lifting enough.” You can even ask my teammates and the staff and the trainers. Me lifting last year and me lifting this year are two whole different people. I was uncomfortable last year, my weight was really low. I feel like focusing on that, I really got confident in the weight room and actually got stronger. I think it really shows in the way I run now. It’s more powerful instead of just running.

TPN: What were you thinking when you crossed the finish line at the ACC Indoor Championships for the 400-meter?

DG: In indoor, they break up the finals into two heats, and I was in the first heat. So when I found out I was in the first heat, I was kind of disappointed. When I finally got to run first, I had to set the tone for the rest of the people because four more girls had to run after I ran, still competing for the same thing I’m competing for. When I crossed the line and looked at my time, I was like “oh my god.” I really wanted to run 52 [seconds], and I ran low 53. I couldn’t even watch them run the race. I just sat there saying “did they cross the line yet?” Then, when the Duke girl crossed the line in the second heat, the announcer said that she had won. I’m waiting for her time to load on the board, and her time was slower than mine, so I thought I got disqualified. My teammates and I were just looking at each other confused. And then finally, he said, “oh, correction, it was Pitt,” then my teammate jumped on my back. So it was a lot of ups and downs. It was kind of hard to be happy because my emotions were everywhere.

TPN: What are your individual and team goals for the upcoming outdoor season?

DG: First, I want to be the fastest ever at Pitt because I was the first to win gold, but I was not the fastest that has ever ran at Pitt. So that’s my goal, to get the fastest time. 52.27, I want to be faster than that this season. If I do that, I believe I can defend my title in indoor. Also, I want the relay teams to make it to regionals this year, and from there, on to nationals. So I guess that’s my whole team because the 4×100, the 4×400 and me. That’s my whole running group, basically. Also, I would like to go one, two with my teammate Quadaisha Newkirk if she runs the 4×400.

TPN: What would running after Pitt include?

DG: There’s worlds this year. That’s a big goal for a lot of track athletes. No one’s really thinking too hard about the Olympics yet, but world’s is definitely a marker for people building up to this year. I believe there’s going to be a lot of NCAA girls running at worlds this year because they are really fast this year.