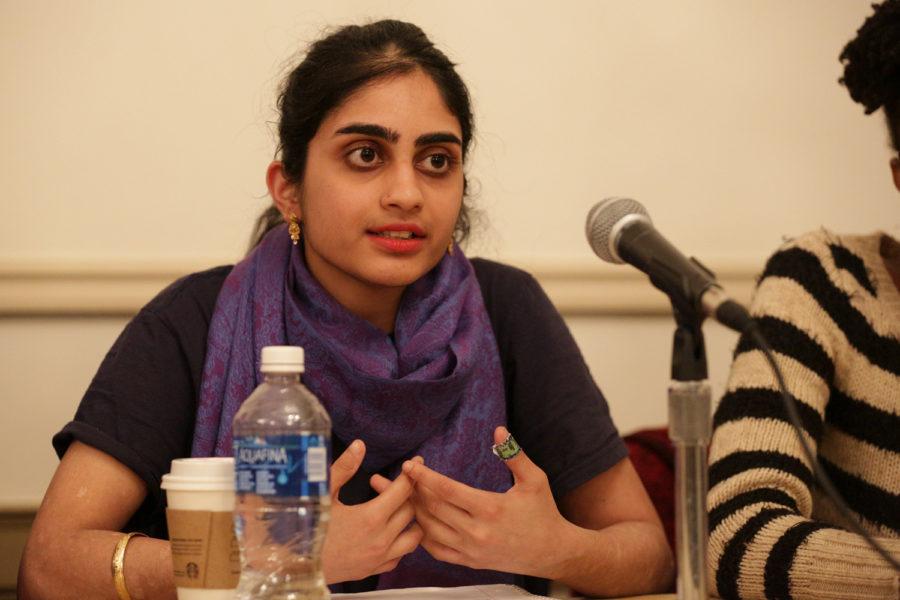 The panel consisted of Krithika Pennathur, president of Pitt Unmuted; Rose Barone — who prefers to go by Sawyer — executive assistant of Rainbow Alliance; Albert Tanjaya, advocacy chair of the Pitt Asian Students Alliance; Daniel Jacobson Lopez, a doctoral student in the School of Social Work; Ami Fall, a Student Government Board member; Coley Alston, a Pitt Alum who works at the Persad Center; and Kayla Williams, a rape survivor. Professor Gabby Yearwood, an associate professor of the department of anthropology, served as moderator for the panel.

The panelists responded to a series of questions, both curated and from the audience. Yearwood began the session by asking what was missing from current educational models concerning marginalized groups.

Lopez brought up studies related to education and reporting procedures. According to Lopez, research studies have determined that people feel most comfortable when talking to someone from the same marginalized community.

“There hasn’t yet, as far as I’ve seen, been one best practice used across the United States on college campuses when we talk about policies and educational programming,” Lopez said. “They have found that when peer educating on rape and sexual assault prevention … it’s best when it’s the same gender.”

While they discussed education as the best form of sexual assault prevention, panelists also addressed what types of oppression — such as a fear of retaliation from the victims community, or fear of losing one’s job — can contribute to specific marginalized groups and how a member of the community could react to sexual assault and violence. Tanjaya, a sophomore computer science major, said his environment impacted his behavior. He grew up in a Southeast Asian community and said he was generally taught to hide emotions or problems that could be perceived as weak.

“I was raised on ‘Anything related to family matters is a private matter,’” Tanjaya said. “So anything that happens in the house stays in the house.”

Yearwood asked the panel about barriers that could keep victims of sexual assault survivors from reporting what happened to them. Sawyer said sexual crimes against marginalized groups are sometimes underreported because survivors fear no one will believe them.

“When you’re marginalized, it sometimes seems like your word doesn’t matter as much as somebody else’s might,” Sawyer said.

Fall, a junior political science and psychology major, said people may be hesitant to report a crime,  because of the social consequences. And in a small community, accusing someone of sexual assault could be divisive and cause conflict.

“By reporting them and bringing that to life, they’re [the perpetrator] going to be there if you don’t report it, and they will be there if you do,” Fall said. “It’s like, ‘Oh, we know that person, there’s no way.’”

The panel then discussed a University of Oklahoma study that found some privileged groups are less informed about sexual assault than others and tried to determine how that can be shifted.

Sawyer said the quality of sex education in the United States is poor, and that most public school students learn very little throughout the course of the secondary education. Sawyer also proposed a system in which units covering everything from sexual health to sexual assault are taught every year.

“If I hadn’t done research on my own or had my own experiences, I wouldn’t be able to tell you anything,” Sawyer said.

The panelists then took questions from the audience, fielding a student question about what the limits of sex education in public school are when it comes to sexual assault.

Williams said anything that comes about because of a culture — or develops a culture around it — is very difficult to alter, and that is why changing the environments people are brought up in can have the most impact.

“If you really want to change how people interact with culture on that widespread level it has to start at home with our family members and the people whose opinions matter most to us,” Williams said.

A previous version of this story reported there were six panelists at the event. This is incorrect as there were seven panelists present. This story has been updated to reflect Coley Alston was also a panelist. The Pitt News regrets this error.