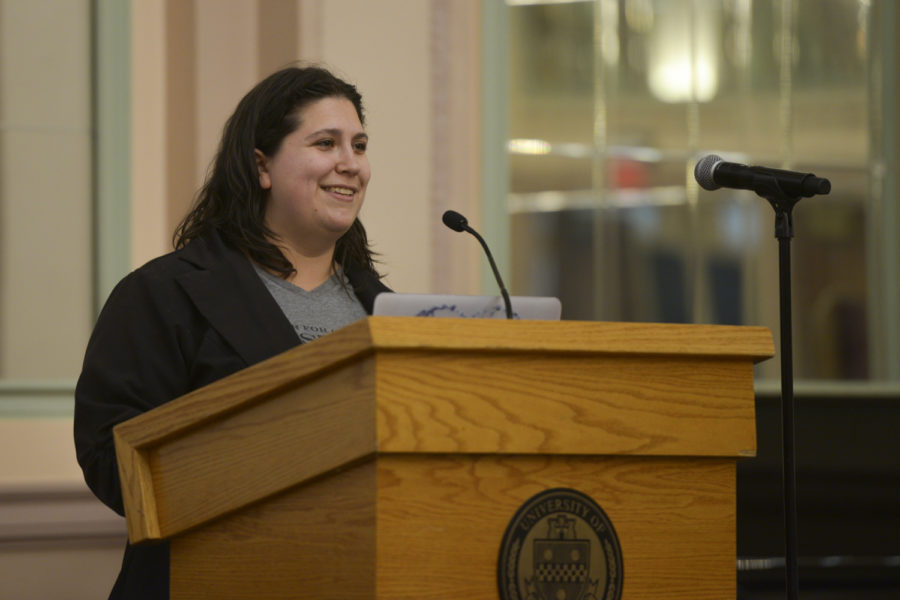 By Theresa Dickerson | For The Pitt News

Two student-led campus organizations at Pitt collaborated Wednesday evening, hoping to dispel the myth that advocacy for environment protection and advocacy for jobs are mutually exclusive.

Free the Planet and United Students Against Sweatshops teamed up to bring in Veronica Coptis, the executive director of the Center for Coalfield Justice, to talk about the intersectionality between the economy and the environment.

Coptis is a local native from western Greene County who joined the CCJ as a community member in March 2013. She grew up near Consol Energy’s Bailey Mine Complex  — the largest underground coal mine in the United States — and now lives on the eastern side of Greene County.

“My husband, family and friends have all worked in coal mines,” she said.

Coptis led the event by discussing the work that the CCJ does. The organization originated in 1994 and is known for fighting against underground coal mining — but it is also making strides to become an organization that takes a broader look at rural issues.

“We recognized that in rural communities, people aren’t living a single-issue life, so we are working towards intersecting many issues at one time,” she said. “Environmental justice is still our root, but we have a structure that we can help other people in the community that are dealing with other social justice issues.”

Varsha Ramasubramanian, a junior social work major, and Ann Deely, a junior urban studies and history major — members of United Students Against Sweatshops and Free the Planet, respectively — welcomed students at the entrance to the event. While there, they asked attendees to sign the petition against Shell’s Falcon Ethane Pipeline, which would feed Shell’s proposed petrochemical “cracker” plant in Beaver County. Concerned citizens have criticized the “cracker” plant for its potential to diminish air quality and for not being as sustainable as advertised.

Deely and other students involved in Free the Planet, such as fifth-year mechanical engineering major Gerard Tessier, have spent weeks collecting more than 680 signatures.

“We were outside Hillman Library when a man came up to our table disagreeing with our petition,” Tessier said. “He went into the library, researched the topic to get more information and ended up signing our petition that day.”

In addition to the petition, students involved in Free the Planet visited a public hearing at the  Pennsylvania Department of Environmental Protection to discuss testimonies of local community members who have and will be affected.

Larisa Mednis, president of Free the Planet and a junior double majoring in sociology and gender, sexuality and women’s studies, saw a need to continue the conversation of environmental protection and other social justice issues, such as job opportunities, affecting similar communities. So, she invited Coptis to Pitt’s campus to speak about the intersectionality of economic and environmental advocacy.

“I wanted to have an event that intersected environmental issues with labor issues by collaborating with organizations on and off campus,” Mednis said.

During her speech, Coptis showed a series of videos explaining the politics and history of activism for both economic and environmental justice issues. She said CCJ is not only an organization that fights for environmental justice, but also one that advocates for alternative tax structures for communities, holds policymakers accountable for their voting records and offers transitional jobs for both unionized and unorganized workers.

“If you’re involved in any of these advocacy communities, you always hear that you have to choose the environment or jobs, not both. But this just isn’t true,” Coptis said.

The CCJ has a long-term goal of involving its members in leadership roles in their communities. Coptis said they are setting up programs to get them to run for positions so they can start being part of the conversation.

“If we don’t have a seat at the table, we are going to continue to have Democrats in office saying they care about environmental decisions, then voting in different ways,” Coptis said.

The event ended with two breakout discussion groups led by members of both USAS and Free the Planet.

“If students want to be politically involved, this is a great way to do that,” Mednis said. “We really try to get out in the community and have many visions of activism for the future.”