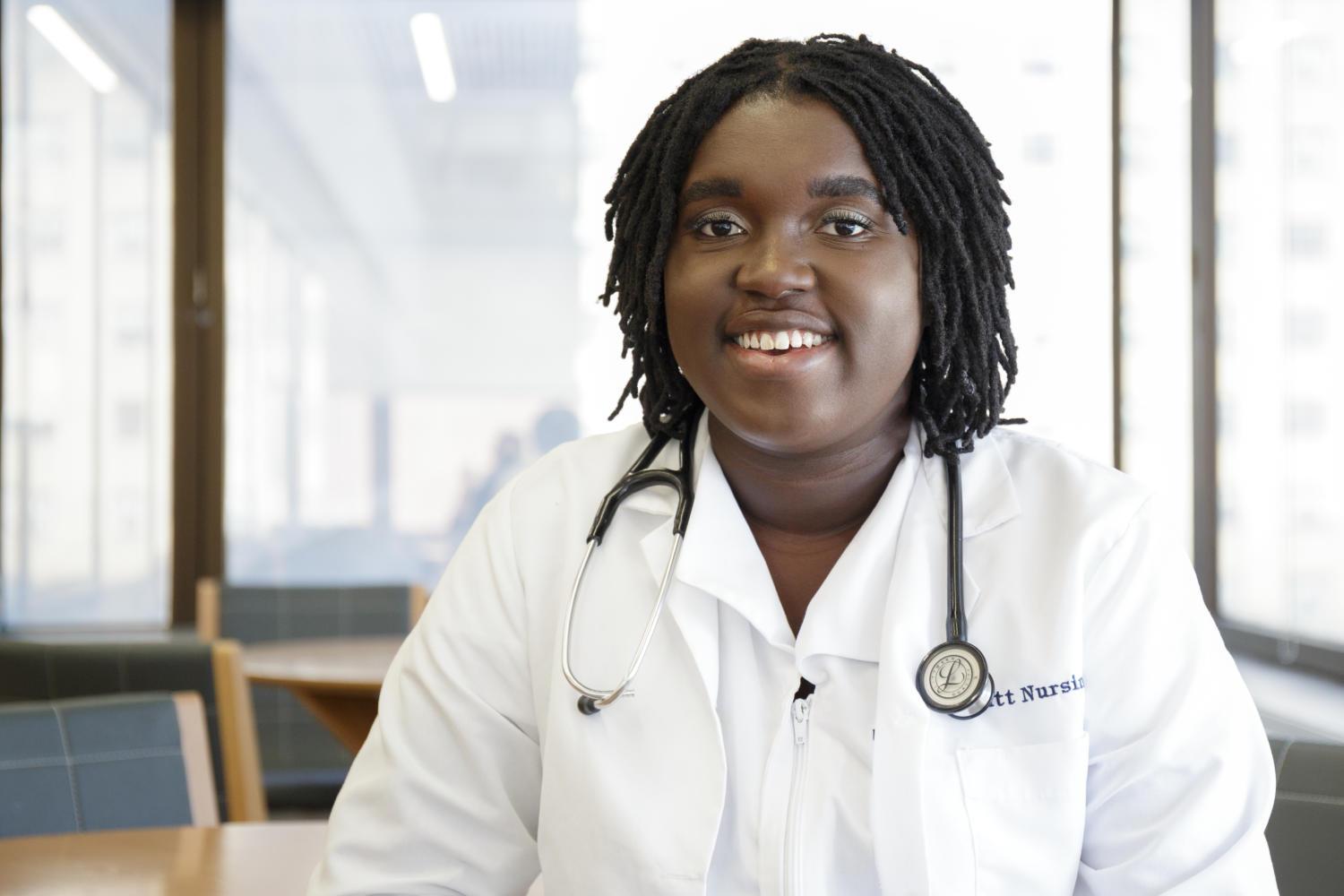 Before Aminata Kamara graduated from Eleanor Roosevelt High School — which specialized in STEM — she already knew she wanted to enroll in a four-year nursing program.

In fact, she had her whole life planned out until she turned 21.

“Now that I'm 21, I literally really don't have any plans anymore,” she said. “[But] I'm making new goals and setting up new things for myself."

Kamara, a senior at Pitt, is currently enrolled in Pitt’s School of Nursing. She also has significant leadership experience at Pitt as the current president of Delta Sigma Theta, a major African-American sorority, and the former president of the Black Action Society.

Wearing a crisp white nursing uniform after a long shift at clinical — how nursing students gain practical experience — she moves her hands vigorously as she talks about her future, dark ear-length braids swaying around her head.

Kamara credits her parents, immigrants from Sierra Leone involved in the medical field, with inspiring her to study nursing. Despite her fixed plan, she describes her future as one of the ongoing “crises” she has to deal with, like the overwhelming emotion that comes with witnessing the miracle of birth as part of her studies. She speaks quickly and with passion about the activities she is involved in, especially her sorority.

While Kamara is now the president of Pitt’s chapter of Delta Sigma Theta, she didn’t get involved with them until her sophomore year. Delta Sigma Theta’s main purpose is to “provide assistance and support through established programs in local communities and throughout the world,” according to its website. Those qualities are what drew Kamara to it above Pitt’s other sororities.

“I was like, ‘These people are doing what I want to do, but they do it in a more organized way,’” she said.

The six-person group runs programs ranging from food drives for the Pitt Pantry to Hip-Hop for HIV — an event that provided musical performances along with HIV and STD testing to combat the stigma of getting tested. Kamara considers her sorority sisters more than capable of handling everything they do in a year.

“These women are literally bosses,” Kamara said. “Whatever they’re doing, they’re going to do it well.”

Lauryn Hood, a junior finance major in Delta Sigma Theta, said Kamara’s leadership strategy focuses on delegation. Hood said Kamara may not be physically at the forefront of things, but she is the one coming up with ideas and making people feel welcome and included.

“If anything is going wrong, I know I can call Ami and I know that she's going to do what a big sister would do,” Hood said. “In terms of just having a good friend to talk to, Ami is that friend to go to.”

But Kamara didn’t always have those kinds of relationships. In fact, she felt isolated and depressed her first year of college, because she hadn’t found a friend group or a club to jive with yet.

Before committing to Pitt, Kamara attended Pitt’s World of Possibilities program, which brought African-American, Hispanic and Native American students together to learn about opportunities and programs available to minority students.

She appreciated Pitt’s apparent diversity until she got to PittStart and realized that the number of minority students present at World of Possibilities did not accurately represent what the University population actually looked like.

She said she felt tricked.

"I had a crisis at PittStart. I was in Towers lobby like, 'What the heck, Pitt lied to me,’" she said.

Kamara said growing up in Prince George’s County, Maryland, helped her appreciate and strive for diversity. In high school, she said it wasn’t unusual for a friend group to include people from a variety of different races. Pitt, in comparison, includes cliques definitely based on race, Kamara said.

She thinks Pitt makes a genuine effort to meet its diversity and inclusion goals, but Pittsburgh itself needs work. Kamara said the concept of “black neighborhoods” being different than “white neighborhoods” is troubling to her, because in her hometown, it’s not like that.

“For African-Americans in Pittsburgh, it’s still a segregated city,” she said. “How can I ask my children to be a pioneer and be the only African-American child in their elementary school if I wasn’t even that?”

After getting over the initial shock of Pitt’s actual demographic makeup, Kamara pledged to find a place where she felt she belonged. During the spring semester of her first year, she joined Black Action Society and finally found her groove.

Kamara was the president of BAS during her junior year, which she describes as being “one of the best decisions [she] ever made.” She was glad to be both addressing diversity at Pitt and be making friends who felt the same way she did.

“It was my job to ... give programs to campus that were both enjoyable for minorities but also nonminorities,” she said. “And make sure we're educating people because everyone doesn't come from the same background."

To help students not feel as isolated as she did her first year, Kamara participated in the Pitt to You program her junior year. The program sends Pitt students to China to meet with prospective students and give them a firsthand account about what Pitt life is like.

One of her mentees, first-year nursing major Youjia Wang, said Kamara was her first friend at Pitt and helped her settle in when she arrived. Kamara checks in with her mentees at least once a month to make sure they are doing well.

“It is Aminata who always tells me that I don’t have to be so worried about [nursing school] and since she can make it, I can make it,” Wang said. “Aminata is not only my friend, but also my supporter.”

Kamara tries to show others support not only in her student organizations, but also in her nursing work. The hospital floor she works on is the pulmonary step-down floor, which cares for patients with lung issues.

Kamara, who’s nursing preference is geriatrics, said she tries to remember food that makes each patient happy. If a patient is upset, she often tries to brighten their day by bringing their favorite snacks without them asking. One of Kamara’s favorite patients to work with is an elderly man with schizophrenia who loves the way she prepares a cup of tea for him — orange pekoe with five sugars and no lid.

During clinical, also called transitions, students work 12-hour shifts with a mentor nurse and tend to six or seven patients throughout their time there. Though it’s nice to have someone to learn from, Kamara prefers to be the one in charge.

She said she doesn’t have a specific role model in life, because she takes inspiration from everyone around her and then uses that knowledge to help them out.

“I always want people to do better than me,” she said.