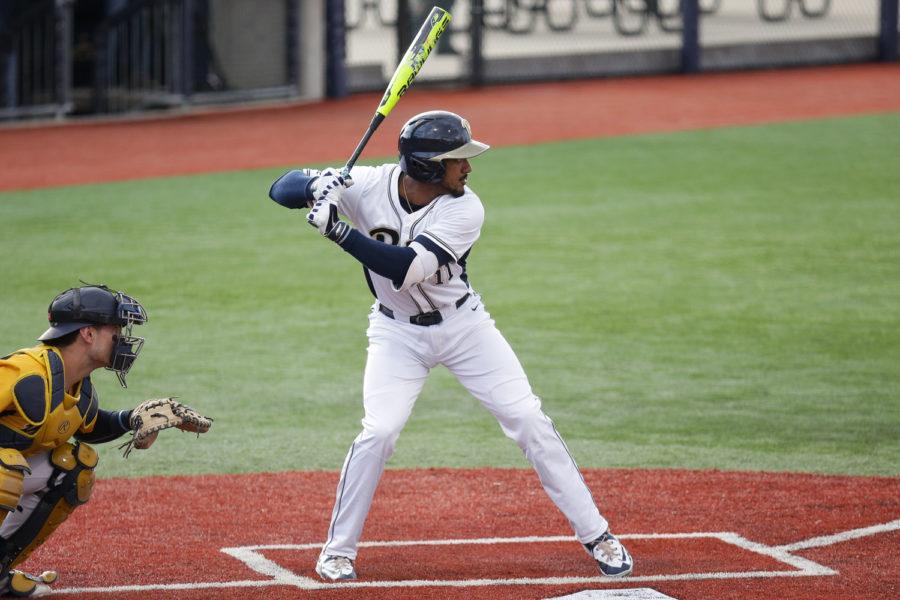 This past weekend for Pitt Athletics looked like a repeat of the one before it. Track athletes again set personal bests and nabbed top finishes as softball and baseball each won two of three and tennis continued to struggle.

Like tennis and softball, the baseball team also hosted Georgia Tech this weekend, winning two out of three games moving their record to 19-14 overall and 8-10 in conference.

In their first game Friday, the Panthers lost 7-3. Pitt held onto a 3-1 lead into the eighth inning, but six runs from the Yellow Jackets soon after eviscerated the Panthers’ victory efforts.

Saturday’s game went to extra innings and saw the Panthers even the series with a walk-off in the 14th inning. Redshirt senior Matt Pidich started for Pitt, throwing 8.2 innings and allowing two earned runs on his way to striking out eight. Sophomore RJ Freure threw 5.2 innings in relief, allowing no runs while striking out 11.

Sabino led the way offensively with two hits and three RBIs, including the game-winning walk-off RBI. First-year Chris Cappas had the other RBI.

Like the softball team, the baseball team won their third game of the weekend, taking the series 2-1.

The game went back and forth, with Pitt trailing by one heading into the bottom of the seventh inning, but a two-run frame secured the win for Pitt, 6-5.

Redshirt senior Frank Maldonado and Washington Jr. provided the offense on the day. Maldonado went 2-3 with three RBIs, a homerun and two runs scored. Washington Jr. was 3-4 with two RBIs. Junior Cole MacLaren had the other RBI.

Rival West Virginia comes to town Tuesday for another chapter in the Backyard Brawl. First pitch is at 6 p.m.

The softball team won two out of three against ACC rival Georgia Tech this weekend, moving to 11-6 in conference and 22-16-1 overall.

Pitt won the first game of Friday’s doubleheader, 4-2. The Panthers had a lead from the bottom of the first to the end of the game — Georgia Tech’s two runs in the seventh were just not enough.

Junior Sarah Dawson threw a complete game allowing just three hits and two runs, striking out seven, and senior Giorgiana Zeremenko was 2-3 on the day with a hand in each run.

In the second game, the Yellow Jackets came out on top, winning 8-6. Georgia Tech’s six-run first inning proved too much for the Panthers and they couldn’t catch up. Sophomore Kaitlyn Kruger led the comeback effort with two hits, four RBIs and a run scored. Senior McKayla Taylor and junior Gabrielle Fredericks also added an RBI each.

In the tiebreaker Saturday, the Panthers emerged victorious, 6-2. Georgia Tech drew first blood with a run in the first, but it was all Pitt after that. The Yellow Jackets left runners on base all day, registering seven hits but only two runs.

The team will travel to Kent, Ohio, Wednesday to face the Golden Flashes in an evening matchup. The first pitch is at 4 p.m.

The track team was a house divided this weekend, with some members heading to Knoxville, Tennessee, for the Tennessee Relays and others traveling to Lewisburg for the Bison Outdoor Classic at Bucknell University.

The team turned in a dominant performance in Tennessee with a host of top-10 finishes. Senior Andin Fosam’s hammer throw of 57.01m earned her sixth place, while first-year Ade Jones-Roundtree was fourth in the men’s 400m with his personal best of 47.03. Seniors Quadaisha Newkirk, Laila Ismail and Morgan Harvey also all placed top-10 in the 400m hurdles.

Sophomores Shyheim Wright, Carolyn Helenski and Taylor Middleton all locked up top-10 finishes as well. Helenski was seventh in the women’s javelin and Wright was sixth in the men’s 110m hurdles, while junior Grant Jones took second in men’s javelin with a personal best of 67.10m.

The team of Jones-Roundtree, first-year Noah Cook, junior Ken Brosier and first-year Lonzell Feagin finished the 4x400m relay in fifth and the 4x100m relay in seventh.

The Bison Outdoor Classic was also full of top-10 finishes for the Panthers.

The Panthers will head to Charlottesville, Virginia, next this Friday for the Virginia Classic.

The tennis team again struggled against ACC opponents, losing 6-1 to No. 2 Georgia Tech on Friday and 7-0 to Duke Sunday, moving their record to 0-12 in conference and 6-13 overall.

Against the Blue Devils, Lucas and Bartolome fell to the No. 8 doubles pair 6-2 and Okamoto and junior Gabriela Rezende lost 6-1, handing Duke the doubles point.

The team’s next match is in Raleigh, North Carolina, Friday against ACC foe NC State.