March for matter: Community comes together for science 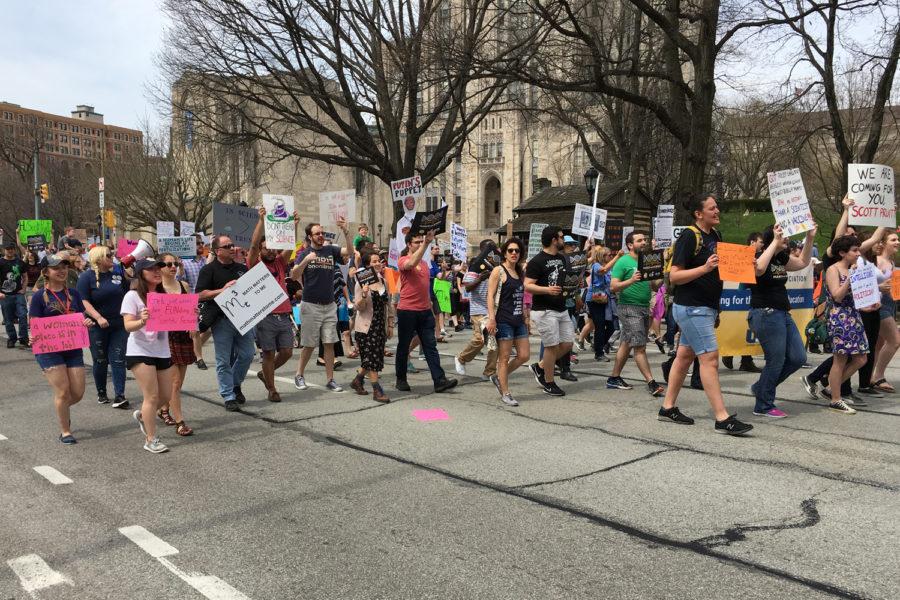 Citing an “attack on science and science finding,” Dana Kellerman went to Washington, D.C., last April to join the first March for Science.

One year later, Kellerman, a 52-year-old resident of Fox Chapel, came to the Pittsburgh march with a more specific demand.

“I marched this year because I think there needs to be a lot more funding for evidence-based gun policy,” she said.

Kellerman joined 100 protesters on Pitt’s campus on Bigelow Boulevard Saturday afternoon in a block-wide march to promote policy that focused on science. Activists chanted pro-science slogans such as “Get up, get down, Pittsburgh is a science town,” and “No science, no facts, no workers, no science.”

The protest, which was organized by the Pittsburgh division of the international March for Science, began with an hour-long rally featuring several different student and professor speakers from the Pittsburgh academic community, including some from Pitt. Pro-environmental representatives from organizations like the Sierra Club and 350 Pittsburgh set up informational stands to show support for the protesters while spreading awareness for ecologically motivated activism.

As people filled in the designated protest area between the Cathedral of Learning and the William Pitt Union on Bigelow Boulevard, speakers offered their thoughts on various science-related topics. The subject matter ranged from data collection and statistics analysis to environmental sustainability.

Richard Garland, a professor of public health equity involved in the behavioral and community health sciences at Pitt, shared his perspective on the way statistics can be used to help communities not only at Pitt, but also nationwide.

“Science, academia and education have been under attack. By organizing with my colleagues at the University of Pittsburgh, we can negotiate to improve working conditions and implement transparency in the hiring and promotion process, as well as protecting academic freedom,” Garland said.

Mondreya Howard, a 28-year-old graduate student in the microbiology and molecular genetics departments at Pitt, came out to protest with the Pitt Science Policy Group, of which she is the president. Howard held a sign with images of scientific tools on it, such as a beaker and an atom, which read, “Science Not Alternative Facts.”

“Science is involved in our everyday life. Everything we use is science-based, evidence-based and with technology. So I think it’s really important that people advocate for science,” Howard said.

She also spoke on her mission in conjunction with the Pitt Science Policy Group.

“We want to build a community of grad students specifically, but also a community of undergrads and faculty and just get them talking about evidence-based research with the data to support policies that we make,” Howard said.

Fernando Soriano, a sophomore biology major at Chatham University, spoke on the connection between science and social justice.

After the first half of the speakers concluded their talks, protesters started their march at the intersection of Forbes Avenue and Bigelow Boulevard. Pittsburgh police blocked off the streets so protesters could march safely as they made their way down Forbes Avenue. They went down to South Bellefield Avenue, turned onto Fifth Avenue, then came full circle to the original meeting spot on Bigelow.

At the conclusion of the march, Mayor Bill Peduto gave a brief speech discussing the positive impacts of science-based research for everyone in society.

“Everything we are trying to do as a society in order to make an advancement that builds a future for everyone,” Peduto said. “Why do we have to march for science? Because science is under attack.”