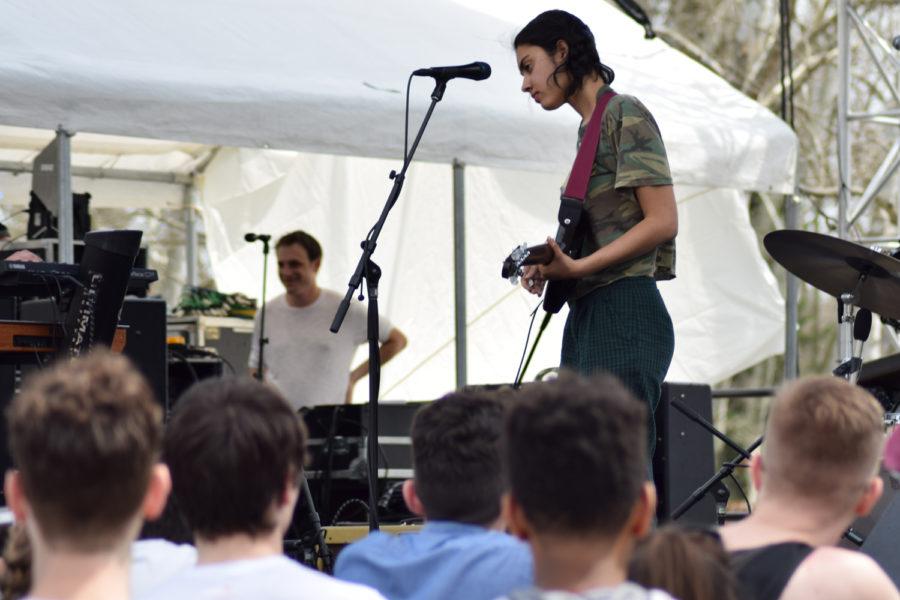 Bigelow Bash — a one-day musical festival complemented by food trucks — is organized by the Pitt Program Council with help from WPTS, the student-run radio station, and the Student Center for Sustainability. According to PPC, 4,000-5,000 students attend the event over its course, from 1 to 5 p.m. Though still named Bigelow Bash, the event venue was moved from Bigelow Boulevard to Schenley because of the March for Science.

Crumb — another opener, selected by WPTS — followed. WPTS has provided a contributing artist to open for the main acts for the past three years. Crumb is an alternative rock and dream-pop band and played songs off of their 2017 EP, “Locket.”

Niki Iyer, executive board director of the PPC, and Zach Linn, special events director, said it can be good for students to be able to display their talents.

According to Linn, showcasing student performers is a way to display local talent. It also encourages people to bring their friends.

“We’ve always had a lot of luck with people supporting each other as fellow students,” Linn said.

Saint Wknd, a Germany-based DJ, performed after Crumb. Saint Wknd’s set consisted of remixes of popular songs such as “Drop it Like it’s Hot” by Snoop Dogg and “The Less I Know the Better” by Tame Impala. MisterWives, a New York City-based indie pop band and the event’s second headlining act, got on stage at 5 p.m. and opened with the song “Machine.”

Selecting artists to play at the event is a long process for PPC, and starts with picking the dates they want to hold the event on — which is usually a weekend in April. The process concludes when they find an artist they think will be well-received by students and meets their budget and availability requirements.

MisterWives emerged on the stage, with lead singer Amanda Lee Duffy leaping around the stage and repeatedly thanking the crowd. The group formed in 2012 and has a history of opening for bands such as Twenty One Pilots, Panic! at the Disco and former Pitt Fall Fest performers, Walk the Moon. Their 2017 album “Connect the Dots” reached 19 on iTunes.

As the crowd grew to include hundreds of people, they maintained their energy with a cover of “Dreams,” a song by early ‘90s rock group The Cranberries, followed by five more songs — primarily from their most recent album.

Chris Kolimago, a first-year computer engineering student, said he enjoys all the artists who come to Pitt but specifically looks forward to Bigelow Bash. Kolimago said he was also familiar with the headlining acts and enjoyed Saint Wknd, but mainly came to hear MisterWives perform.

Conghua Zhang, an information science student, ended up at the event on his way to the library. He enjoyed all aspects of the Bash.

“I think it’s really good,” Zhang said. “I had ice cream and lemonade.”

While Sodexo provided the lemonade, PPC made sure to maintain the food truck feature at this year’s event. Food trucks are chosen by PPC’s special events committee. The council tries to select a wide variety of options — from Halal to vegan — so individuals with dietary restrictions can participate.

“We try to hit all the checkboxes so that everyone feels like they can have something while they’re there,” Linn said.

PPC began charging for food tickets last year in an effort to make food available longer. Linn said the new ticket system also kept people from taking more food than they needed. According to Linn, prior to last year’s Bigelow Bash, people would take as many tickets as they could, which resulted in the trucks running out of food too quickly.

“This way more people would be able to try the food before we run out,” Linn said, “because we’ve run out of food every year.”

This year’s Bigelow Bash was also a certified green event, and was verified according to the standards of the Student Council for Sustainability. PPC’s efforts to increase the environmental friendliness of the event included purchasing compostable plastic cups and silverware, and access to a large cooler for people to refill their water bottles.

The event ended around 6 p.m. as MisterWives ended their 11-song set with “Our Own House.” And as the music dissipated, so did the crowd.

“Bigelow Bash is the hypest event of the entire year, 100 percent,” Kolimago said.