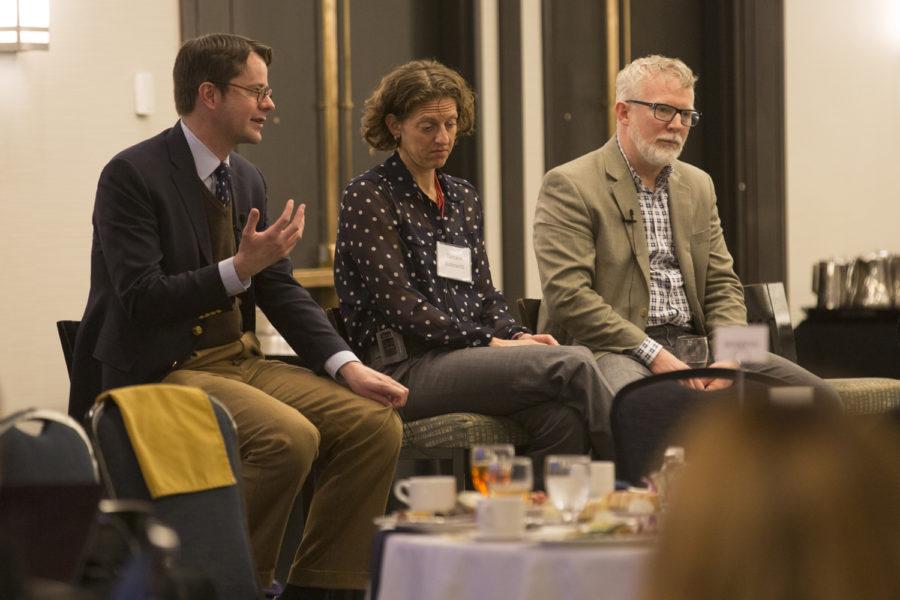 From left to right, Tyler Vanderweele of Harvard University, Tamara Dubowitz of the RAND Corporation and Jeffrey Bishop of Saint Louis University discuss the health policy community and its ability to evaluate factors such as spirituality, friendship and happiness at the Can Science Measure the “Culture of Health”? event in the William Pitt Union Monday night. (Photo by Anas Dighriri | Staff Photographer)

Although in Western tradition medicine and faith are considered separate entities, a Monday afternoon panel sponsored by the School of Nursing called Can Science Measure the Culture of Health? questioned why the two aren’t integrated.

Speakers from the Harvard T.H. Chan School of Public Health, Saint Louis University’s Albert Gnaegi Center for Health Care Ethics, the RAND Corporation and Pitt’s School of Nursing debated what the role of spirituality should be in health care Monday afternoon. More than 100 people attended the panel in the Wyndham hotel ballroom, which consisted of Tamara Dubowitz, senior policy researcher at RAND Corporation, Jeffrey Bishop, professor at Saint Louis University, and Tyler VanderWeele, professor of epidemiology at Harvard.

VanderWeele cited his research in public health claiming spirituality and health are intrinsically linked. He said not only can faith indicate better health, but it actually plays a key role in a person’s physical well-being.

VanderWeele countered his own point by reminding the audience that correlation is not always causation. He conceded that his cross-sectional studies — which only consider data at a single point in time — are a poor way of establishing causal relationships because they can produce data marred by confounding variables. Yet he stood by his claims and said by implementing longitudinal studies, he was able to provide evidence for a causal relationship.

VanderWeele further claimed that for patients to flourish, their spiritual and moral health must be considered as well. He proposed doctors attend to five categories of wellness — close personal relationships, happiness and life satisfaction, mental and physical health, meaning and life purpose and virtue and character.

“People care not just about their physical health, but also about being happy, about finding meaning,” VanderWeele said.

Bishop disagreed with him, though, stating there are aspects to the human existence that cannot be quantified. According to him, medicine cannot function without quantifiable data.

He recounted an anecdote of a patient of his who was going through some difficult times. The patient had complaints of physical ailments, but Bishop eventually diagnosed her with depression. He said when he told her this, she was enraged and accused him of believing he knew something about her that she didn’t know about herself.

Bishop likens this instance to the failures of medicine. According to Bishop, the physician looks at the symptoms and quantifies the patient’s experience as the diagnosis. But in doing so, he neglects to acknowledge the patient’s own self-understanding and how it looked nothing like a textbook list of symptoms.

“We create a certain set of lenses that bring into focus certain things we think are important,” Bishop said. “But when I laid this image up against her, she felt like I had subtracted out all of the particularity of her life, all the most meaningful bits.”

Sarah Gallups, 30, a doctoral candidate in Pitt’s School of Nursing, agreed there is something fundamentally unquantifiable about aspects of humanity. She attended the panel to see how researchers attempt to represent the experiences of their communities. She said she is hopeful that community voices will be better heard in health care discussions but is unsure that an individual’s experiences can truly be understood.

“I think there’s something inherent to being human that is so beautiful. The human experience is vast and constantly changing,” Gallups said. “We as humans automatically want to place people in boxes to better understand them, but that’s not how it works.”