Column: J.J. Redick is one for the NBA record books 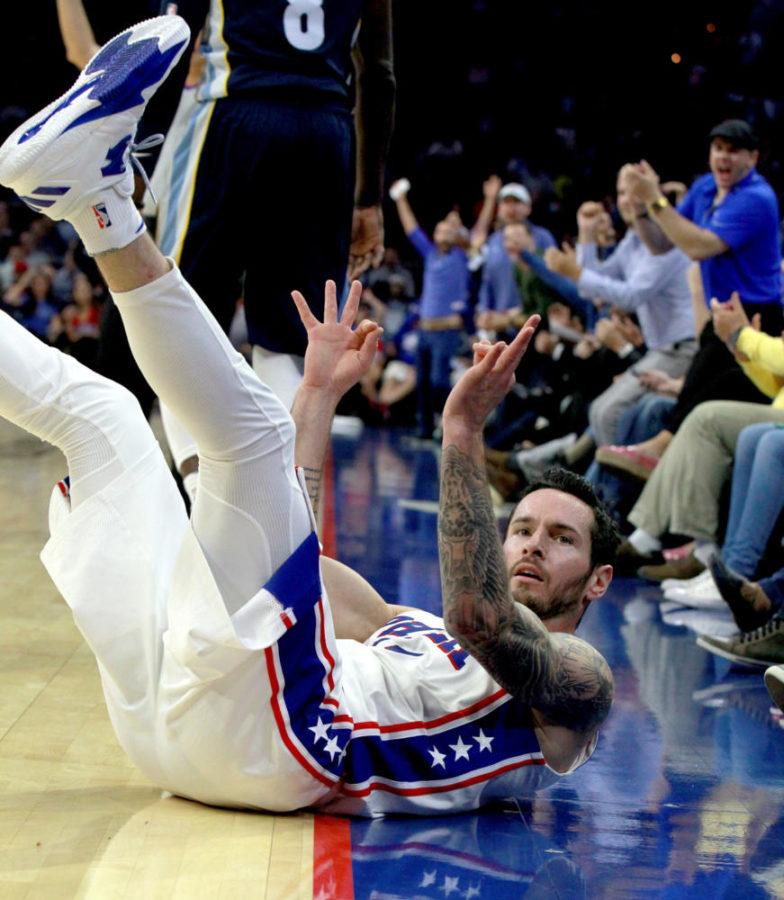 The Philadelphia 76ers' J.J. Redick celebrates after getting fouled on a 3-pointer by the Memphis Grizzlies in the second quarter of a preseason game at Wells Fargo Center in Philadelphia on Oct. 4, 2017. (Charles Fox/Philadelphia Inquirer/TNS)

Every so often in professional sports, a special athlete comes along who is single-handedly able to elevate their team’s performance to elite ranks.

These once-in-a-generation talents carry their teams to the playoffs year in and year out through sheer individual willpower and exceptional ability. In the NBA, notable examples include Michael Jordan, Kobe Bryant, Lebron James and … JJ Redick?

That’s right — JJ Redick. The 33-year-old Philadelphia 76ers shooting guard, now in his 13th season, has never missed the NBA Playoffs in his career — a claim that neither Bryant nor James can make.

Now, I know what you’re probably thinking. Did he just compare JJ Redick to two of the most dominant basketball players of the 21st century? Kind of. Obviously, Redick is nowhere near as good as Bryant or James. He’s never been the best player on his own team, let alone one of the best in the league. He’s never made an All-Star team, nor will he have a place in the NBA Hall of Fame.

But there’s something to be be said for a guy who seemingly has the Midas touch, in the sense that he wins wherever he goes. And while Redick has often served as a complementary piece alongside All-Star teammates, he’s quietly built a stellar body of work in his own right. His elite shooting and unblemished playoff streak speak for themselves.

Altogether, Redick’s career is a case study in correlation, causation and coincidence. Does his performance cause his teams to win? Or has he merely happened to join teams right as they become relevant?

It’s extremely rare to make the playoffs in every season of one’s career. To provide some perspective, only three other active players who have played for 10 or more seasons can say they’ve never missed the postseason, and two of them — Tony Parker and Manu Ginobili — have been lifelong members of the San Antonio Spurs, thriving under head coach Gregg Popovich’s consistent playoff machine.

Redick, meanwhile, has played for four teams — the Orlando Magic, the Milwaukee Bucks, the LA Clippers and now the Philadelphia 76ers. Three of those teams — the Magic, Bucks and 76ers — were non-playoff teams in the season before obtaining Redick, but qualified for the postseason after his arrival.

Philadelphia’s before-and-after marks the most drastic Redick turnaround yet. The 76ers went 28-54 last year, then signed JJ Redick in the offseason and proceeded to go 52-30 — good for the third-best record in the Eastern conference and Philly’s best season since 2000-01. Redick finished as the team’s second-leading scorer, averaging 17.1 points per game.

Still, there are many who might say Redick wasn’t responsible for those turnarounds — he was just in the right place at the right time.

Redick certainly wasn’t the go-to option during his seven years with the Magic, as he never started more than 22 games in one season. His arrival coincided with the emergence of Dwight Howard as a dominant force, and he was dealt just as Howard left and the franchise began to free-fall.

On the Clippers as well, Redick often played third or fourth fiddle beside All-NBA talents like Chris Paul, Blake Griffin and DeAndre Jordan. He escaped to the rebuilding 76ers just as the band began to break up, and his arrival in Philadelphia corresponded with the emergence of All-Star center Joel Embiid and rookie phenom Ben Simmons.

But whether you think Redick has been a catalyst for success or a beneficiary of lucky timing, one thing is for certain — the guy can ball. There’s a reason Duke retired Redick’s number 4 jersey — he currently ranks as the all-time leading scorer for the Blue Devils’ prestigious basketball program.

In the NBA, he’s carved out a role as one of the league’s most dangerous shooting threats — not just in today’s game, but in NBA history. Redick has made 41.5 percent of his career 3-point attempts and 89 percent of his free-throw attempts, good for 15th and eighth all-time, respectively. He’s also averaged at least 15 points per game in every season since 2013.

The JJ Redick factor was on full display Saturday evening — the first day of the NBA Playoffs — during the 76ers’ blowout victory over the Miami Heat. Redick showcased his trademark talents — elite 3-point and free-throw shooting — en route to a team-leading 28 points. He drained four of his six 3-point attempts and all eight of his free throws as the 76ers walloped the Heat, 130-113.

Redick will look to win his first NBA Championship — something that has eluded him so far, despite a constant presence in the playoffs — playing a key role for the 76ers this postseason. If this run proves unsuccessful, there will surely be a spot for him elsewhere. Redick is an NBA general manager’s dream, a player whose skill set makes him, at best, an invaluable asset on any team looking to make a deep playoff run — and at worst, a good luck charm for any organization looking for an instant turnaround.

So no, Redick doesn’t possess the same kind of Hall-of-Fame capabilities seen in Kobe Bryant or Lebron James — the killer instinct and talent to put a team on his back. But as long as he keeps making the playoffs, he’ll retire one of the most consistent winners of his era, and therefore has earned the right to be mentioned in the same breath.