Irene Mena: A world of opportunities 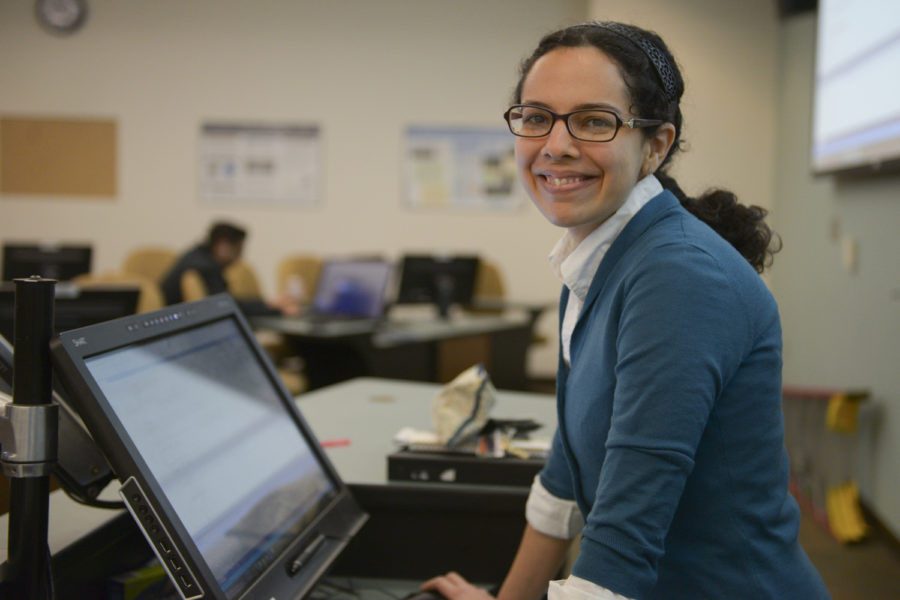 When Irene Mena got her U.S. citizenship Feb. 28 at the Pittsburgh Courthouse, her colleague and friend Dan Budny brought her a cake adorned with an American flag and the words “Congratulations Irene!” written under it.

She ate a piece and then drove right back to her office in Benedum Hall.

This relaxed attitude has governed Mena’s entire life. It’s what’s kept her passionate about teaching, performing arts and science and ensured she stays focused on her work as an assistant professor in Pitt’s mechanical engineering and materials science department. It’s also enabled her to undergo major life changes without phasing her confidence.

Mena was born and raised in the city of Santo Domingo in the Dominican Republic, except for a brief five years when her family moved to Port-au-Prince, Haiti, for her father’s work as an engineer. In both cities, she spoke Spanish at home but attended a bilingual school, where she learned English.

After completing her undergraduate degree in industrial engineering at Pontificia Universidad Catolica Madre y Maestra in the Dominican Republic in the mid-2000s, she left her home in bustling Santo Domingo behind and moved to the small college town of West Lafayette, Indiana, for the opportunity to study engineering at Purdue University.

The only thing that she found really shocking was the weather. Santo Domingo is sunny and warm year-round, while western Indiana is the exact opposite.

“Once we got into the fall season and it progressively started to get colder, [my friend] said, ‘From now on, every day is going to be the coldest day of your life,’” she said.

She found ways to engage in her interests in the United States, which helped her settle into her new home. Still an avid musician, she joined Purdue’s choir and took up salsa and ballroom dancing.

And she also taught — a lot. Not only did she serve as a teaching assistant for Spanish 101 at Purdue, she also began teaching dance once she became comfortable in her lessons.

After moving around from Indiana to Illinois to State College, Mena settled in Pittsburgh in 2015 at the Engineering Education Research Center in the Swanson School of Engineering. She now focuses on how to prepare the next generation of engineers for the types of problems they’ll encounter in the real world.

Her passion for teaching shines through in lectures. At the beginning of her introductory engineering class, she pushes up her glasses and ties back her medium-length brown hair, then briefly introduces the topic to be covered that day. She usually spends no more than 20 minutes talking about the topic during the two-hour lecture before diving right into practice problems.

Mena transforms coding — usually an individual task — into a group activity. Her students work in groups of three and write code to simulate real-world situations, like an ATM, the current running through an electrical circuit or a game of poker. Mena wanders throughout the classroom, and as her students get stuck, inserts herself between group members, helping them brainstorm ideas.

Students think her style of teaching is highly effective. Julia McKay, a sophomore chemical engineer, took Mena’s first-year engineering class in the spring of 2017 and had nothing but praise for the way Mena taught.

“I liked the class because it was very exercise-based. It wasn’t just her teaching at us — it was interactive,” McKay said.

Izzy Carnaval, a senior chemical engineer, had Mena for Social Entrepreneurship — Engineering for Humanity, a class that focuses on how engineers can apply their technical knowledge to social or environmental issues. She described it as a class that teaches engineers how their skills can be used to make the world a better place.

“I know that sounds very cliche, but I think that as engineers we sometimes forget that we have a responsibility not just to the product or consumers but … a responsibility to future generations,” she said.

Carnaval has taken what she’s learned from Mena to heart. She is currently working with Higher Achievement, a nonprofit that gets economically disadvantaged middle school students excited about college. And Mena continues to mentor her, teaching her how to work with a nonprofit that focuses on one of Mena’s passions — educating the next generation of students.

Mena is wholeheartedly devoted to her life in the United States, but she misses her home in Santo Domingo. She misses her family, her friends and all the things she used to do. She misses the colonial district of her city, filled with buildings and churches that predate the founding of America. But at the same time, she recognizes that the move was a good choice.

“I love what I do. I met my husband,” she said. “I’m pretty happy with the decision.”

Though her life so far has been defined by moving, she’d have no problem settling down in Pittsburgh.

“If teaching [these classes] is what I do for the next 20 years, that’s awesome,” she said.