Anjali Kumar: A journey into faith 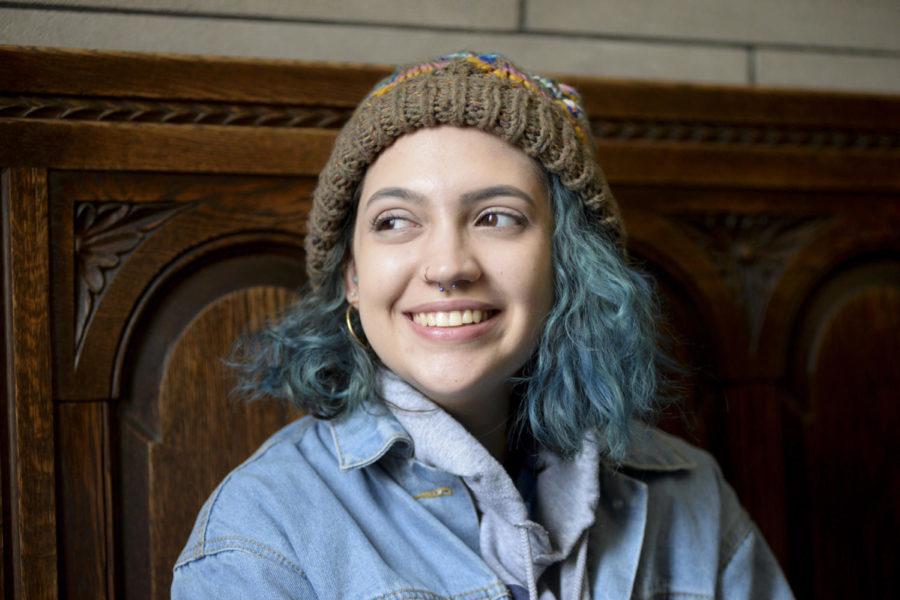 Anjali Kumar poses for a portrait in the Cathedral of Learning. (Photo by Kyleen Considine | Senior Staff Photographer)

Anjali Kumar has an infectiously bright presence. The corners of her eyes crinkle when she smiles and her curly teal hair bounces in rhythm with her steps.

She said she has a lot to be happy about these days. She just joined a sorority and is making friends in her new faith community. Plus, she just added a new houseplant to the collection near her dorm room window — a philodendron named Phil. The sophomore neuroscience major may seem to have it all figured out, but she has worked hard to reach the peace she experiences now.

Kumar has suffered from generalized anxiety disorder since she was young. Through a journey of multicultural and religious experiences, as well as efforts to find the right modes of treatment for her mental health, she’s improved her mental state and now advocates for others to do the same.

Kumar’s troubles started when she was a child. Her family went through trying times, and eventually her parents divorced. She frequently found herself panicking and worrying.

“Since the first or second grade, I started having night terrors, and as I got older, I started to get anxious all the time,” Kumar said. “And all I could do was just sit there.”

During her first semester at Pitt, her mental health worsened further.

“It got really bad,” she said. “At that point, it felt like everything was crashing.”

She sought help from the counseling center at Pitt but couldn’t find the help she needed there. But the center referred her to a psychiatrist who listened to her and helped her get on medication.

Over time, Kumar’s mental health began to improve. She said she was able to start “focusing less on myself on this earth and more about the plane [of existence] that’s greater than me.”

Kumar questioned everything about the nature of existence as a child. As the only child of a biracial couple — the daughter of an Indian father and a white American mother — she used to ask her father questions about Hinduism and her mother questions about Catholicism. Her mom would jokingly tell her she asked too many questions to be Catholic.

Kumar wanted to seek out religion as a child, even though her parents did not emphasize it much. Finally feeling more at peace living on her own at Pitt and being treated for her anxiety, Kumar began to explore religion again.

“I wanted that community, and I wanted those answers,” she said.

So, she started asking the same questions she always had as a child. In between or during classes, she researched different religions, one by one over a period of months.

“Everyone has their own way of connecting to God or finding their way spiritually,” Kumar said. “I just needed to find the way I could feel comfortable.”

Because of her exposure to Hinduism through her father’s family and her friends, Kumar began her search there.

“My best friend growing up was from a Hindu family, and I used to go to Carnatic dance classes with her,” Kumar said, smiling. “They even gave me my own copy of the Bhagavad Gita!”

But Kumar couldn’t get comfortable with the concept of polytheism. She wanted to know why there were so many iterations of God. Shifting her focus toward a related but monotheistic faith, she researched Sikhism.

“They look to gurus for guidance,” she said. “But I can’t look to people as my source of guidance. Ultimately, I have to find my own connection with God.”

Islam was the next religion on the list. Kumar admitted she was wary at first, referring to the often frightening portrayals of the religion in the mainstream media.

“I tried finding less biased sources online, and then I found this hotline, and the woman who I called was a convert,” she said. “I was like, ‘I have so many questions for you!’”

After learning more about the religion, meeting with Muslims in the area and visiting a mosque, Kumar was almost ready to commit to Islam. But she had one worry. She wasn’t sure whether her sexual orientation would jive with her new religion.

Crying, Kumar visited the local imam — an Islamic scholar — to ask his opinion.

“What matters is your belief and your faith. It doesn’t really matter who you love,” she recalls the imam saying. “Don’t tell anyone I said that though, because of … how bigoted people can be. But there are gay brothers and sisters in the community.”

Kumar converted to Islam in the middle of last year and has continued to learn about it since, making Muslim friends at Pitt and continuing to read the Quran in her spare time. She wants people to know that identifying as LGBTQ+ shouldn’t prevent one from pursuing religion.

“A lot of [LGBTQ+] kids are — I was one of those kids — deterred [from religion], and it’s not their fault,” Kumar said. “But I almost missed out on a whole community of love and support.”

“[Kumar] comes off as sweet and quirky in a super charming way,” Kandil said. “Her eyes light up when she gets excited about a topic and it’s super cute.”

Amal Saeed, a junior majoring in global studies and molecular biology and the Pitt MSA president, was impressed by Kumar’s openness.

“I really admire her confidence and willingness to be open with other MSA members, and I think that that has contributed to how well received she has been,” Saeed said.

Kumar still takes medication and goes to therapy for her anxiety. She’s also started practicing dhikr, an Islamic meditative practice, to help her “stay grounded.” The treatments and new sense of community help her to focus on the things she enjoys doing in life — asking questions about our existence and purpose, spending time with her sorority sisters, volunteering at the hospital and taking care of her ever-growing collection of houseplants.